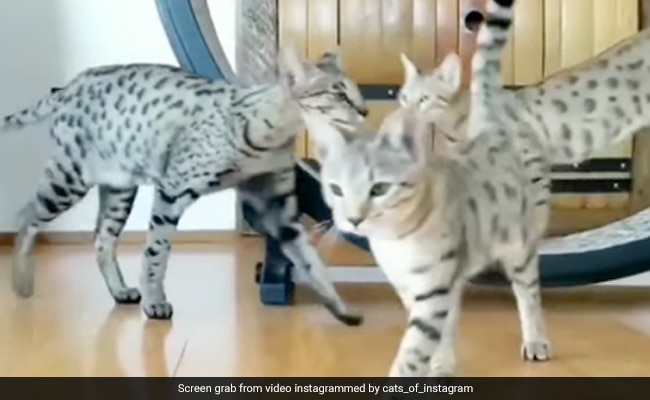 Videos of pets doing adorable antics and mimicking their owners are liked a lot by social media users, but there are some which often leave the users amazed. Like the video of a kittens working out together.

Shared by a user named Cats of Instagram a day ago and credited to Instagram user Spotitude Savannahs, the video opens with a cat working on an exercise wheel while another one can be seen exploring its exterior. As soon as the first cat gets off from the exercise wheel, a third one starts the workout.

The video has amassed over one million viewers and received more than 43,000 likes since being shared. Uses have left amusing remarks in the comment section of the post.

“Brings exercise to yet another level,” wrote one user. A second one said, “That’s quite a party.”

“Poor second cat was like I WANNA TRY,” commented a third user.

Cat videos are frequently shared on social media. Recently, a clip showed an unusual friendship between a kitten and a dog. They were seen sleeping together on a bed, with the kitten doing everything to make its friend happy.

The video was shared by Buitengebieden on Twitter with the caption, “Lean on me, when you’re not strong. And I’ll be your friend, I’ll help you carry on.” The video was credited to Bill Withers.

The video received over two million views and more than 74,000 likes on Twitter. More than 7,000 users re-tweeted the post.