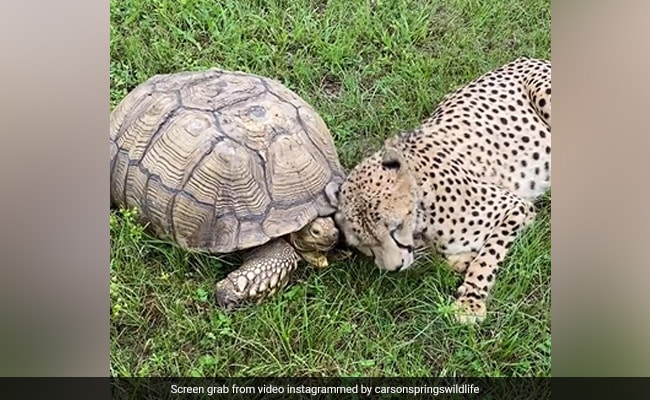 Picture shows the cheetah rubbing its head in tortoise’s shell.

In a person’s life, friends are the most crucial source of support. They prevent individuals from feeling isolated. Additionally, having friends can improve your mood and feeling of purpose, as well as lower your stress levels.

A video is gaining traction on social media that shows a cheetah playing with a tortoise in a park by rubbing its head on the tortoise’s shell. After gazing over the park for a bit, the cheetah rubs its head once again. The tortoise too seems to be having fun with its companion as it lies still on the grass.

The viral clip has attracted over 1.1 million viewers and garnered more than 56,000 likes since being shared on Instagram. Some users have adored their friendship in the comment section of the post while others found it funny.

One user wrote, “Cheetah must be thinking what a funny head scratching rock! It has retractable rock parts.”

Another said, “Just when I thought I’d seen it all man unbelievable.”