Home
Internet
Hello Internet, These Pics Hrithik Roshan Posted Are Really Not About The Cars 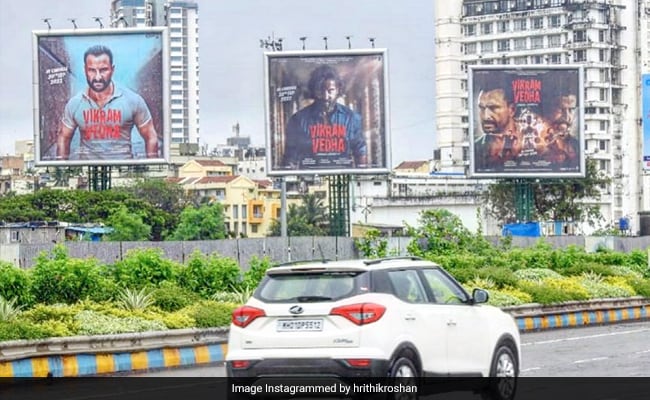 Hrithik Roshan is super busy with the promotional duties of his upcoming film Vikram Vedha. However, the actor has been equally adept at sharing social media posts regularly. On Sunday night, Hrithik Roshan shared an interesting post with a caption that read: “Hmm, which one do you like better? The white ? Or the blue/black?” The second car is a BMW but the cars were only an excuse for some subtle marketing of Vikram Vedha – not even the BMW can distract from the three strategically placed hoardings promoting the upcoming film in the photos. Hrithik and co-star Saif Ali Khan have a hoarding each and the third features both actors.

“All,” commented celebrity stylist Anaita Shroff Adajania in answer to Hrithik Roshan’s question. Some comments, however, were obsessing over the cars. “How can we regret BMW X5,” wrote a fan, referring to one of the cars. “I like the BMW.” added another fan. Another fan voted for the Mahindra xuv300.”

In terms of work, Hrithik Roshan will next be seen in a high-octane action film co-starring Deepika Padukone, which is titled Fighter. The film will be directed by Siddharth Anand. He was last seen in the blockbuster hit War, co-starring Tiger Shroff and Vaani Kapoor. He awaits the release of Vikram Vedha with Saif Ali Khan and Radhika Apte. The film will release in theatres on September 30. The film will clash with Mani Ratnam’s Ponniyin Selvan.