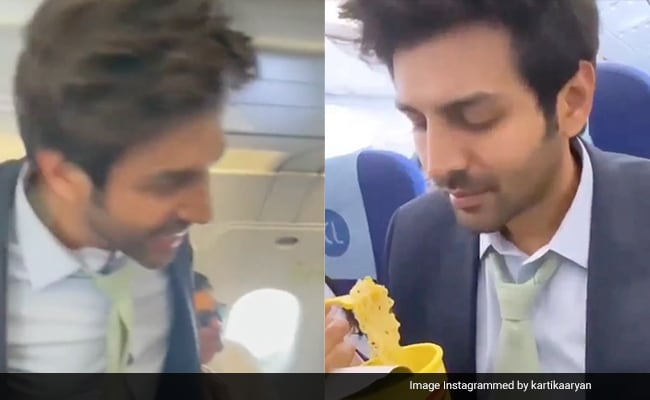 Kartik Aaryan is creating a heavy buzz on the Internet after he travelled in an economy class flight while returning from Jodhpur to Mumbai. A video from the flight is surfacing on a social media platform that shows him interacting with his co-passengers. In the video, we can see Kartik looking dashing in a formal outfit while his fans cheer for him and laud the actor for his performance in Bhool Bhulaiyaa 2. On hearing this, he says, “So sweet of you” and “thank you”. Also, he happily posed for his fans and clicked selfies with them. This video of the actor is winning the hearts of his fans on the Internet. Sharing the post, a fan captioned it as “#KartikAaryan travelling in economic class, but his heart is as rich as business class. Yeh ladka hee kuch alag hai!!! Itna saara pyaar and soooo humble he is,” followed by heart emoticons. The actor was returning from a conclave he had attended in Jodhpur.

Here have a look at the viral video:

A fan also shared a video of Kartik Aaryan eating Maggie and captioned the post as: “This is the 1st time I’ve seen a Bollywood Actor eating instant noodles no doubt why you’re masses ke favourite”. Soon after the video was posted, fans flooded the comment section. A fan wrote, “He’s one of us,” while another wrote, “Sir cute moment enjoy”. Check out the post below:

Meanwhile, Kartik Aaryan is basking in the success of Bhool Bhulaiyaa 2, co-starring Tabu and Kiara Advani. Next, he will be seen in Rohit Dhawan’s Shehzada with Kriti Sanon, Satyaprem Ki Katha with Kiara Advani and Freddy with Alaya F.