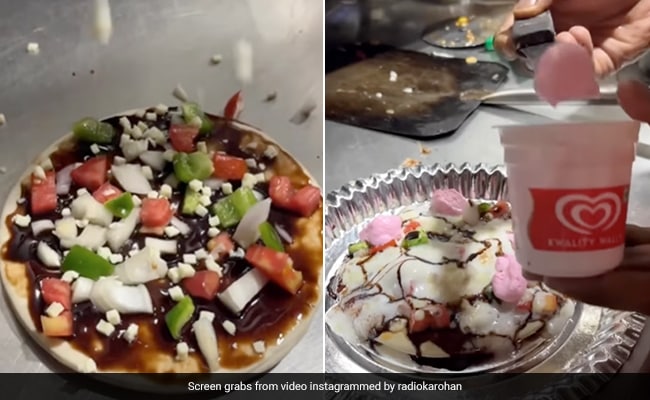 The street vendor made vegetable pizza with vanilla and strawberry ice cream in viral video.

Fusion food has become the latest trend on the internet as people love to experiment and combine different dishes to create a new one. While some of these experiments are appreciated online, others are usually dubbed ridiculous. Case in point, a bizarre video showing a street vendor making “ice cream pizza” has now gone viral online and left food lovers uncomfortable.

Shared on Instagram by RJ Rohan, the video shows a street-side vendor preparing a pizza using chocolate sauce and vanilla and strawberry ice cream. Toppings for the pizza also included cheese, bell peppers, onions and other vegetables. At the end of the clip, when a man tasted the bizarre dish, he was literally on verge of throwing up.

The viral video has left netizens enraged. While internet users called the video “disgusting,” others suggested that the street vendor should throw the dish in the dustbin.

One user jokingly tagged Dominos and Pizza Hut and wrote that they “must try” the dish. Another wrote, “I can’t have this pizza.”

A third commented, “Agar kisi ko bimar hone ka man kar raha hai to , try Jarur Karen (If someone feels like getting sick, then they must try this).” “I want to puke in the face of man who thought of putting onion on chocolate sauce,” added fourth.

Meanwhile, this is not the first time a bizarre food combination has gone viral. Earlier, a video showing “meat cereal” had left foodies utterly confused. The recipe was called ‘Creamy Carnivore Soup’ and involved seasoning ground pork with salt.

The meat was cooked till it dried up completely and became something like cereal. A milk concoction was then created for the meat cereal by mixing cream cheese with meat broth. Chef and blogger @itscourtneyluna  was making it as part of the carnivore diet that excludes all fresh produce.