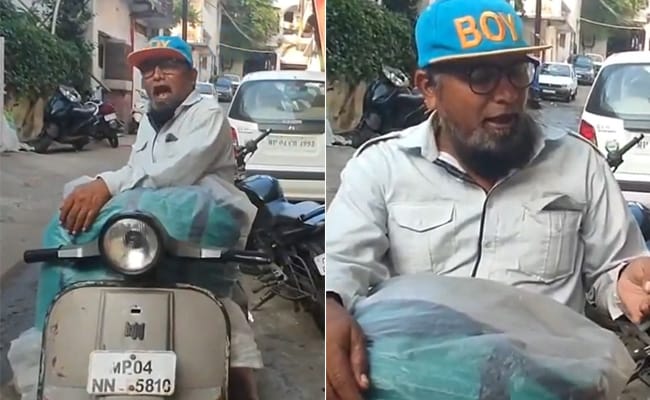 The ‘Kacha Badam’ song sung by Bhuban Badyakar to sell peanuts in remote village of West Bengal received a lot of love from social media users. Now, a new video showing a namkeen seller in Bhopal and his unique way of selling the snacks has gone viral on the internet. The humble namkeen seller is using a jingle to sell the snacks.

The video features an elderly man sitting on an old scooter carrying several packets of snacks. He is singing and telling his customers the cost of each product and its specialty. “Nam Nam Nam Nam Namkeen Ke Packets Aur Tee Tee Tee Tee Tees Tees Rupaiyee Ke (The packets of namkeen cost Rs 30 each),” the man is heard singing as he tries to attract buyers. In the video, many people are seen enquiring about the products.

The 44-second video was shared on Twitter by manishbpl with a caption that reads, “Bhopali Namkeen Wala… There is no dearth of talent in Bhopal.” So far, the video has amassed 1,15,600 views with 509 retweets.

Internet was impressed with his hilarious way of selling the packets of the popular snacks. While few called him “Salesman of the year”, others compared him to Badyakar and said music composer Yashraj Mukhate might create a remixed version of this song. A user wrote, “Boy! This tip of the tongue product knowledge & This Lyrical way of Wooing the Customers, No Business School will teach one.”

People are comparing the namkeen seller to Badyakar, who became an internet sensation after his “Kacha Badam” song surfaced on social media.

The song became a viral hit after one of his customers shot a video of him while selling peanuts and shared it on social media.