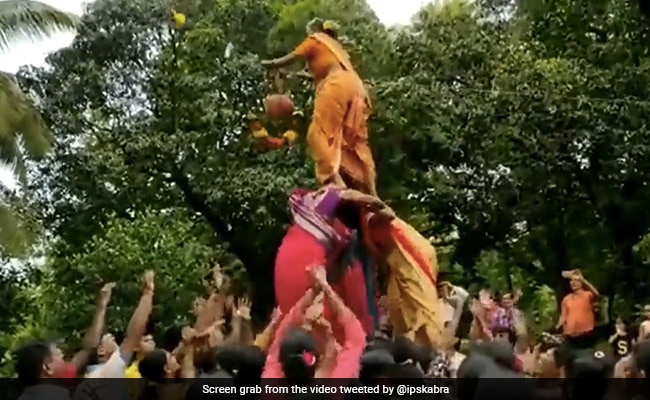 The location where this incident took place is yet to be known.

Janmashtami might have gotten over but colourful videos and photos of people celebrating the festival are still surfacing on the internet. One such clip shared by Indian Police Service (IPS) officer Dipanshu Kabra is going viral. It shows an old woman enthusiastically gearing up for the Dahi Handi event and climbing up a human pyramid.

Dahi Handi competition is part of the Krishna Janmashtami festival and it is celebrated across the nation. The video shows the woman dressed in an orange saree successfully reaching the pot tied at a height, while people around her cheered in the background. “The Incredible dadi,” Mr Kabra wrote in the caption.

The location where this incident took place is yet to be known.

Since being shared, the video has taken the internet by storm. It has garnered more than 187,000 views and nearly 10,000 likes. Internet users showered the comment section with praises. While some lauded the old woman for her grit, others simply called her “inspiring”.

One user wrote, “Age is only a number we count until we’re old enough to know it doesn’t count – Katrina Mayer. This video proves that! #DahiHandifestival is truly all-encompassing.” Another added, “Super dadi.”

“Superb,” wrote third, while a fourth said, “Age is just a number. Don’t let age stop you from being your best. Where there is a will, there is a way.”

Meanwhile, another video of a Dahi Handi event from Maharashtra had taken the internet by storm a while back. In the video, a young devotee was seen putting in every ounce of his energy to break the Handi. However, even after 23 strikes, he wasn’t able to make any headway.