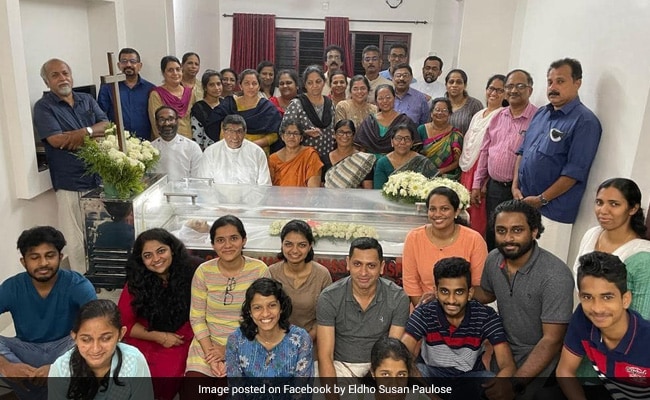 At least 40 people were present for the “family photo”.

A photo clicked at a funeral in Kerala is going viral on social media. The reason? The family members are seen posing happily around the casket. The photo is from Malapally village in Pathanathitta district where the funeral of 95-year-old Mariyamma took place last week, according to Times of India. She died on August 17. At least 40 members of the family are seen smiling as they gather around for the funeral casket for a “family photograph”. The photo has led to a discussion on social media in which Kerala minister V Sinvankutty also joined in.

Mariyamma was bed-ridden for a year due to her age and health, which had worsened over the last few weeks, the Times of India report said. She has nine children and 19 grandchildren, all spread across the globe but most of them were at family home when she died, the outlet further said.

One of her relatives told Mathrubhumi that the intention was not go viral. The relative, Babu Umman, said that Mariyamma lived happily for 95 years and loved all her children and grandchildren. He further said the photo was taken to remember the moments the family spent with her.

The outlet further said that the photo was taken at around 2.15am on Friday, soon after the funeral prayers. It was the family’s wish to take the photo and save it.

“The people who cannot acknowledge the picture are those who have seen only tears after death. Instead of lamenting, the dead have to be bid adieu merrily. We have done the same,” another family member told Mathrubhumi, adding that they don’t have any complaint against anyone.

Kerala Education Minister V Sivankutty spoke in favour of the family. “Death is painful. But it is also a farewell. What could be happier than giving a smiling farewell to those who have lived happily ever after? This photo doesn’t need negative comments,” he said on Facebook.

Some users on Facebook criticised the family for posing gleefully, while others defended them, saying there is nothing wrong with the photo.