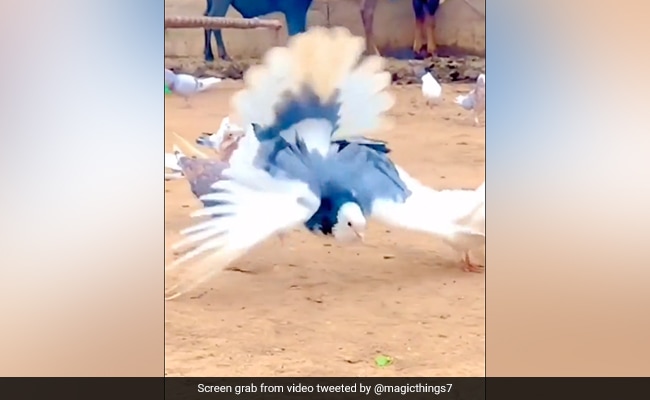 The amazing stunt by the pigeon has amazed social media users.

A video going viral on social media shows a pigeon doing a backflip. The short clip has stunned Twitter users and amassed more than 5.5 million views on the micro-blogging website alone. The white pigeon with a blue patch on its body is first seen spreading its wings and then performing the backflip not once or twice, but thrice. And the bird achieves the feat with its wings outstretched. Looking at the video, many users sad it doesn’t look like the bird has performed this stunt for the first time.

The video has been shared by Hana on Twitter with a simple “Wow” caption. The 11-second clip shows the pigeon landing perfectly on the ground after every backflip – like a gymnast.

Users are amazed by the performance and have posted a barrage of comments.

“Oh come on! You fly already. Now your just showing off,” said a user. “Gymnastics well done,” tweeted another. Some users posted other videos of animals performing unusual tasks – like a cat imitating two boxers while watching television.

Many users wanted to know how this is possible for a bird.

According to an article in Universities Federation of Animal Welfare (UFAW), there are some breeds of pigeons – roller and tumbler – which have the innate ability to perform backflips like these.

“The roller and tumbler breeds of pigeon have been selected for tumbling behaviour in flight, to the extent that some tumblers can no longer fly but, instead, tumble as soon as they intend to take wing,” the article said.

“The consequences to the birds are difficult to assess but are clearly adverse when they lead to injuries due to hitting the ground or tumbling over it,” it added.

A video was posted on Reddit a few months ago, in which a pigeon exhibited a similar behaviour.