• Global satellite internet market revenue was worth USD 3,985 million in 2021, with a 18.2% CAGR over the forecasting years

Satellite internet is likely one of the most impressive feats of internet delivery. According to Morgan Stanley, satellite internet will account for half of the global space economy by 2040. In certain circumstances, such figure might rise to 70%. A satellite internet connection transmits an internet signal from the internet service provider (ISP) to the device via a satellite. Over the last two decades, the internet has evolved from a commodity to convenience and a need, owing primarily to the smartphone revolutions. Although mobile phone penetration will hit 48% by 2020, internet penetration will remain limited to metropolitan consumers. Using this approach, an internet connection is transmitted from a satellite orbiting the Earth, providing uninterrupted internet and connectivity even in rural and isolated areas. 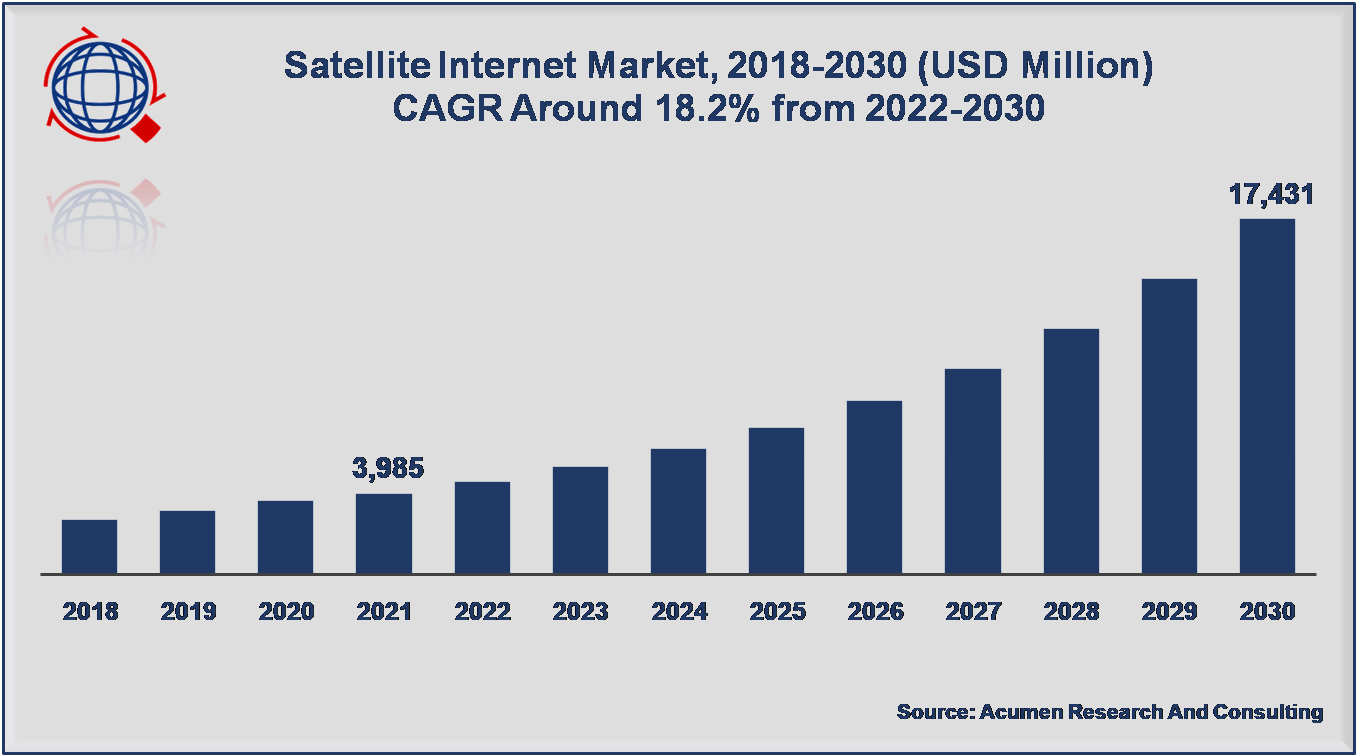 The satellite internet market comprises satellite internet sales by entities referring to the broadband system that is dispersed across several satellite dishes placed both on the Earth and in space. Satellite internet works by sending radio signals to satellites that orbit the Earth. Since these locations lack infrastructure facilities like radio communication connections, cellphones, or fiber cables, it is typically employed in remote or difficult-to-reach areas. The three primary forms of satellite internet products are two-way satellite-only transmission, one-way receiving, and one-way broadcasting. Two-way satellite uplinks can deliver information from a distant contact site to a hub via a satellite. The numerous band types, such as X-band, L-band, C-band, and K-band, affect a variety of industries and market segments, including corporate, government, residential, military, and industrial.

Furthermore, the continuous expansion of internet connectivity around the globe, as well as numerous technological developments such as 5G, Internet of Things (IoT), cloud services, blockchain, and Artificial Intelligence (AI), among others, have massively improved the satellite internet market growth over the last two decades. As of April 2021, more than 4.5 billion individuals were actively utilizing the internet worldwide. Furthermore, expansion in the ICT industry has greatly contributed to market growth, productivity increases, and R&D spending, among other economic shifts in various nations around the world. Furthermore, the ICT industry’s supply of goods and services contributes to economic growth and advancement.

Check the detailed table of contents of the report @

The global satellite internet market has been fragmented by Acumen Research and Consulting based on band type, as well as end user. By band type, the market is separated into C-band, X-band, K-band, L-band, and Others. By end user, the industry is divided into commercial users (government & public sector (law enforcement agencies (fire department, police department, others), public health organizations, and emergency relief centers), corporate institutions, maritime & aircraft, and others), and individuals.

The global satellite internet market is divided into several geographic regions: Asia-Pacific, Latin America, North America, Europe, and the Middle East and Africa. As per the satellite internet industry analysis, the North America region can dominate the global market in 2021. This is due to the region’s increasing use of cutting-edge technologies such as cloud-based, IoT, and AI technology, as well as the rise in government attempts to provide satellite technology in various parts of North America. Furthermore, the growing desire for simple and convenient broadband connectivity in remote areas, notably in the defense and military industries, is propelling the regional market.

Besides this, Asia-Pacific is predicted to increase at a rapid pace during the projection period. This is mostly due to the increased use of satellite internet by various sectors, including business and government, to communicate with rural and remote locations. In addition, the Chinese administration has started spending in the formation of a wholly owned government corporation to build up and run a broadband satellite constellation, which represents a profitable prospect for the market.

Questions Answered By This Report

About Acumen Research and Consulting:

Acumen Research and Consulting is a global provider of market intelligence and consulting services to information technology, investment, telecommunication, manufacturing, and consumer technology markets. ARC helps investment communities, IT professionals, and business executives to make fact-based decisions on technology purchases and develop firm growth strategies to sustain market competition. With the team size of 100+ Analysts and collective industry experience of more than 200 years, Acumen Research and Consulting assures to deliver a combination of industry knowledge along with global and country level expertise.