So, as always, there are only three things you can do: buy, sell, or hold. In this particular case, in August my family sold out of our SmileDirectClub shares, and we doubled up on our Farfetch position. So, why did we do that? 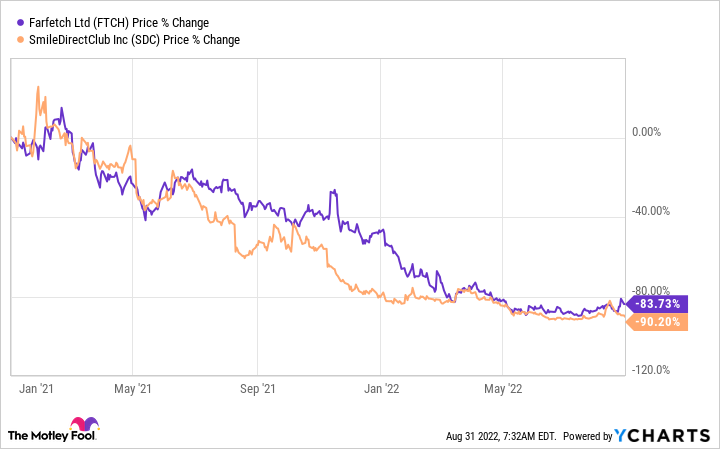 I was very bullish on SmileDirectClub in 2019

SmileDirectClub is an internet company that provides an easy, direct-to-consumer experience in healthcare. Instead of spending a lot of money going to an orthodontist, you can fix your smile by subscribing to the company’s clear plastic retainers. These are similar to the retainers that Align Technology developed many years ago and that have gone off-patent.

When my family bought shares, the numbers were great. Smile had $586 million in sales over the trailing 12 months, and the revenue growth rate was 113% from a year ago. Plus the market opportunity was sky high.

Unfortunately, the growth story has stalled. Smile is attempting to disrupt the orthodontics industry, largely cutting them out, as a middleman. Not surprisingly, the industry has been fighting back, trying to allege that these retainers are a health risk.

When investing in early-stage disruptive companies, you want to pay attention to the idea of “crossing the chasm.” Early in a product life cycle, the customers who try this new thing are risk takers. What you want to see happen is that more conventional people (the huge majority) start adopting the product as well.

It’s 2022, and it looks like Smile is having difficulty getting to the mass-adoption phase. Revenue over the last 12 months was $541 million. That’s where Smile was three years ago. So to have zero growth in three years is more than disappointing.

In addition, there’s a drawback to this business model. Once a person’s smile is fixed, you’ve lost that customer. There is no repeat business. Smile can make up for this with strong word of mouth. Presumably, many of the people whose smiles have been fixed will have children, and their smiles will need fixing, too.

One of my favorite business models involves repeat customers. It’s a weaker business when you have to constantly spend money in order to attract new customers. For now, that’s what Smile has to do. And profits remain elusive.

Farfetch has a stronger business

Internet commerce remains one of my favorite investment ideas. My early investment in Amazon is foundational to my whole investment philosophy. That stock made a stupendous run from $4 billion to over $1 trillion. If you want me to jump up and get excited, just whisper the words, “Amazon tried to compete with them and gave up” in my ear. That’s why I invested in Shopify, and it’s why I made early investments in Farfetch.

Unlike Smile, Farfetch stock was a spectacular winner for me for a few years. Like a lot of internet names, the stock has been slammed in 2021, but the business is in terrific shape. Farfetch has its own website and web traffic, but most of its business is providing software-as-a-service (SaaS) to the high fashion industry.

I love this sort of subscription business where customers lock in and you enjoy a lot of recurring revenue. Upscale fashion houses like Prada and Kirin want to protect their high-end brands, and so they curtail distribution to general retailers like Amazon. Farfetch recently cemented its online fashion dominance when it agreed to acquire Yoox Net-a-Porter, an Italian online fashion retailer, from Richemont. The stock market was pleased (which is good news because Farfetch is using its stock to pay for the acquisition).

Farfetch’s revenue growth has slowed to a crawl in 2021, going up only 6% in the most recent quarter. I blame macro events for this slowdown. China is a major customer for the high-fashion industry and, of course, China is a mess right now with its autocratic government shutting down much of its economy. Sooner or later, China will open up again.

Farfetch achieved its first year of profitability in 2022, so the growth story is on track, and the future remains bright. Mr. Market has whacked some of the most powerful internet stocks this year, and Farfetch has not been immune to this pessimism. The company’s price-to-sales multiple has dropped by 80% over the last year, from 10 to 2. When the market rediscovers its optimism, this SaaS stock will zoom a lot higher.

Why I made the trade

This was a case of two stocks having severe drops over the last year-and-a- half. In the case of Farfetch, my confidence remains as high as ever. In fact, I see adding shares at this low point as kind of a no-brainer. With SmileDirectClub, on the other hand, my doubts have started to increase. I’m still bullish on the company, actually, and I’m keeping my positive stock pick in CAPS. I’ve just decided to move the stock from a real-money holding to a watchlist position.

It’s entirely possible that SmileDirectClub will zoom 1,000% higher now that I’ve sold the stock. (It’s happened before!) But I made this trade because Farfetch also has a vast potential upside at these prices, and I think it’s a far safer pick on the downside.