You are here: Home / Bitcoin / Bitcoin And The Stock-To-Flow Model: Don’t Put The Cart Before The Horse – Seeking Alpha

In the crypto community, an infamous bullish model on Bitcoin has buzzed in recent months, predicting a substantial appreciation in BTC-USD after the forthcoming halving, expected in May this year.

This model is referred to as the Stock to Flow (SF or S2F) model, which was initially introduced by Plan B, an anonymous quantitative institutional investor from the Netherlands.

The logic behind the model makes sense to us in so far as it treats Bitcoin as a mere commodity (producing no income) and aims at establishing a relationship between the market value of Bitcoin and its scarcity of Bitcoin, proxied by a stock-to flow ratio. Once this relationship is quantified, the price of Bitcoin (BTC-USD) can be inferred.

At first glance, this logic seems to work and offers consistent results with other commodities like gold as silver. 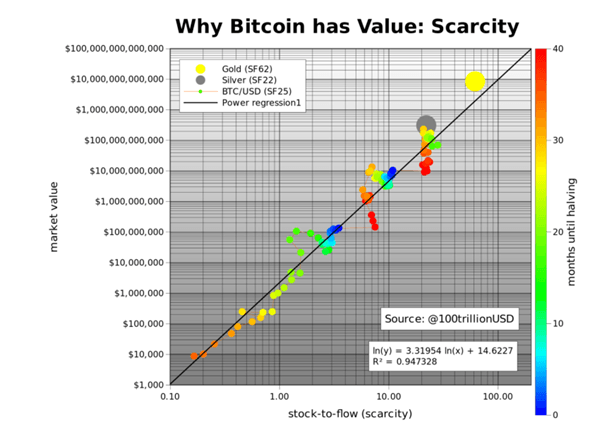 The author uses logarithmic values instead of static values to show an actual linear relationship between the two variables. Fitting a model to non-linear data would result in meaningful prediction errors.

But contrary to other traditional commodities, the stock-to-flow ratio is predictable because Bitcoin was designed with a fixed supply and predictable inflation schedule. To wit from PlanB:

Supply of bitcoin is fixed. New bitcoins are created in every new block. Blocks are created every 10 minutes (on average), when a miner finds the hash that satisfies the PoW required for a valid block. The first transaction in each block, called the coinbase, contains the block reward for the miner that found the block. The block reward consists of the fees that people pay for transactions in that block and the newly created coins (called subsidy). The subsidy started at 50 bitcoins, and is halved every 210,000 blocks (about 4 years). That’s why ‘halvings’ are very important for bitcoins money supply and SF. Halvings also cause the supply growth rate (in bitcoin context usually called ‘monetary inflation’) to be stepped and not smooth.

Based on PlanB’s model, the near-term outlook for Bitcoin could be extremely exciting considering that the forthcoming halving is scheduled in May 2020: 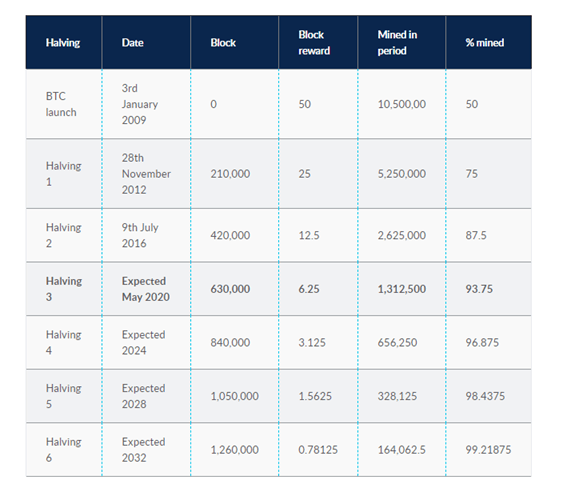 Based on PlanB’s model, the predicted market value of Bitcoin after the May 2020 halving will be $1 trillion, translating into BTC-USD at $55,000, representing a stellar gain from its current price level.

In this note, we wish to discuss the veracity of PlanB’s model and propose a more robust statistical approach to tackle the original model’s limitations. Unfortunately, our conclusions invalidate PlanB’s model because we do not find any significant short-term and long-term dynamics of the relationship between the market value of Bitcoin and the stock-to-flow ratio.

Therefore, we cannot conclude that a substantial appreciation in BTC-USD will materialize after the May 2020 halving.

The model equation, which can be estimated with Ordinary Least Squares (OLS), can be written as follows:

To be specific, the Gauss-Markov Theorem states that the OLS estimator gives the best linear unbiased estimator (BLUE) of the regression coefficients as long as:

Let’s check whether these three assumptions are verified by using PlanB’s data.

We will use raw data from PlanB’s article, available here. The dataset consists of monthly data of the market value of Bitcoin (Bitcoin) and the stock-to-flow ratio (SF) from December 2009 to February 2019. Here are the key statistics of our dataset: 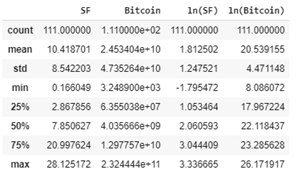 Let’s kick off by double-checking the linear relationship between: 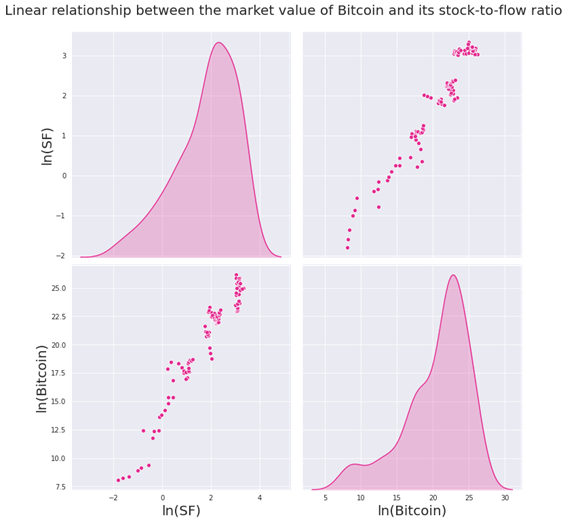 There is indeed a clear linear relationship between the two variables. We can proceed.

Let’s now fit our linear regression model using OLS. Here is the summary of our results: 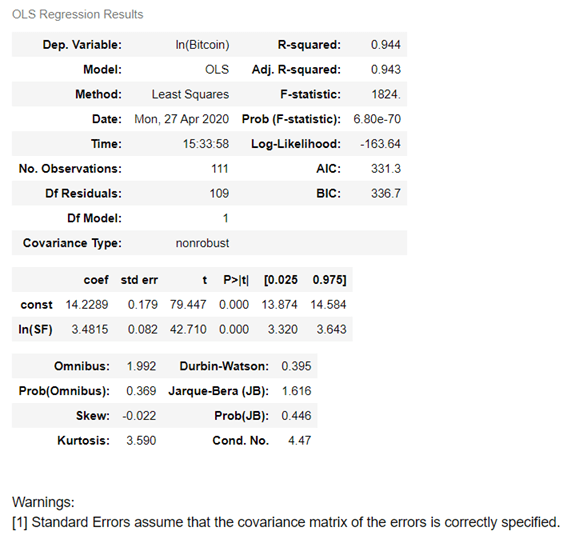 At first glance, the OLS estimators are statistically significant and the coefficient of determination (R-squared) is very high (94%), suggesting that the model fits very well with the data. R-squared is the % of variance explained by the model.

However, we need to be careful and don’t put the cart before the horse. Let’s make sure that our three assumptions about the OLS residuals mentioned above are verified before making any straightforward conclusions.

Do the OLS residuals have a mean of zero?

We find that the OLS residuals have a mean of -1.63552854942978e-14, confirming that the expectation of our OLS residuals is zero. The first assumption is validated.

Do the OLS residuals have constant variance (homoscedasticity)?

Let’s plot the OLS residuals to detect potential homoscedasticity, that is, a non-constant variance. 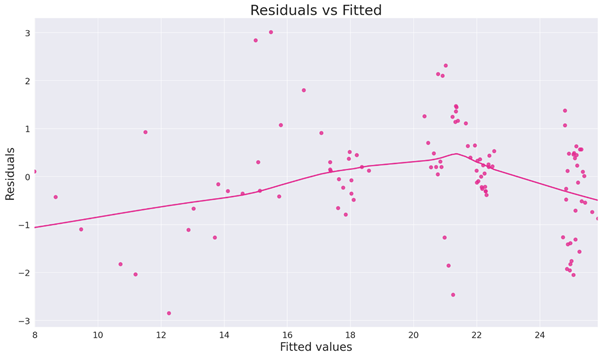 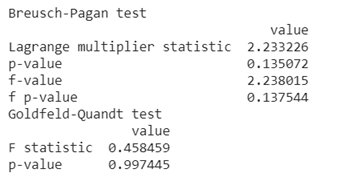 Test conclusion: Considering that the p-value is greater than 0.1, we fail to reject the null hypothesis of homoscedasticity, thereby confirming our initial intuition. The second assumption is validated.

Do the OLS residuals are uncorrelated (no autocorrelation)? 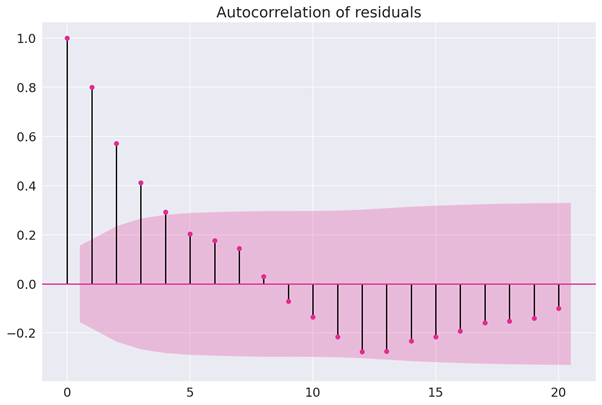 The ACF suggests the presence of autocorrelation. To confirm this, let’s run the Durbin-Watson test, whereby the null hypothesis assumes that errors are uncorrelated.

Test conclusion: The Durbin-Watson test confirms the presence of positive autocorrelation in the OLS residuals. Consequently, the assumption of non-serial correlation cannot be verified. We will discuss the implications of it later in the note.

Is the model stable?

To investigate this, we apply a Recursive Least Square (RLS) filter. 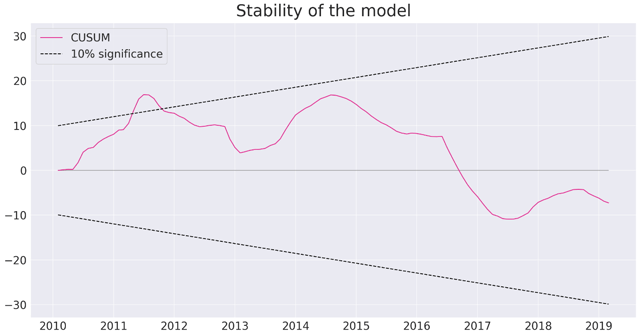 Conclusion: The CUSUM statistic moves slightly outside the 10% significance bands, leading us to reject the null hypothesis of the stability of the model at the 10% level.

Due to the autocorrelation in the OLS residuals, we cannot make statistically meaningful conclusions.

The OLS estimates of the standard errors are likely to be smaller than their true values. As a result, the r-ratios cannot be properly interpretable because they are likely to look more significant than they really are.

Because the t-ratios are not interpretable, we cannot know whether the estimators of our linear regression model:

are statistically different from zero.

The same applies to R-squared. In this regard, the super-high R-squared of 95% in the model above is likely to be misleading.

We need to find a way to know whether we are dealing with a spurious regression (showing an apparent strong relationship between unrelated variables) or a genuine relationship.

In our context ln(Bitcoin) and ln((SF)) ar two non-stationary variables integrated of order 1:

Test conclusion: In both cases, the null hypothesis of a unit root can be rejected at the 5% level.

If these two variables are cointegrated, any deviation from equilibrium will only be temporary, thereby resulting in a genuine relationship.

According to Engle and Granger (1987), if a set of variables are cointegrated, then there exists a valid error correction representation of the data.

In the section below, we will follow the two-step procedure recommended by Engle and Granger in Co-Integration and Error Correction: Representation, Estimation, and Testing (1987) to develop an error correction model and study the true relationship between the value of Bitcoin and the stock-to-flow ratio.

Step 1: Estimate our equilibrium equation and perform a test for cointegration

Our long-term equation is written as follows:

A test for cointegration consists of testing whether OLS residuals (û) are stationary. To do so, we run an Augmented Dickey-Fuller (ADF) unit root test on the OLS residuals. Here are the results: 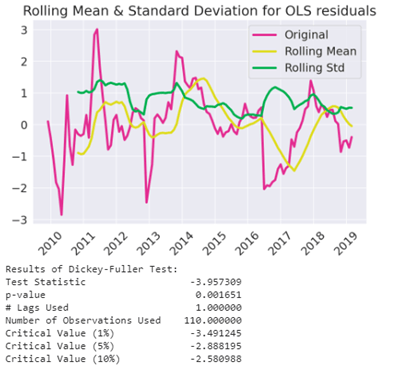 Test conclusion: The null hypothesis of a unit root can be rejected at the 1% level. Therefore, the OLS residuals do not have a unit root and are stationary.

Because the cointegration is verified, we know that our OLS estimators are super-consistent. That said, the serial correlation in the residuals affects their efficiency. Consequently, traditional diagnostic tests need to be overlooked.

Our ECM equation can be written as follows:

Because this equation has only I(0) variables, there is no longer autocorrelation in the OLS residuals and as such, traditional diagnostic tests are appropriate.

This ECM describes the short-term and long-term dynamics of the relationship between the market value of Bitcoin and the stock-to-flow ratio.

The adjustment coefficient, α, which should vary between -1 and 0, measures the speed of the adjustment toward the long-term equilibrium. Should α be positive, the impulse response would be explosive, forcing us to reconsider our model.

To determine the lag lengths (p and q) for our ECM, we will run two VAR regressions using each variable as an endogenous variable. We will use Akaike’s Information Criteria (NYSE:AIC) to select the optimal lag length. We initially selected a max lag length of 10. Here are our results: 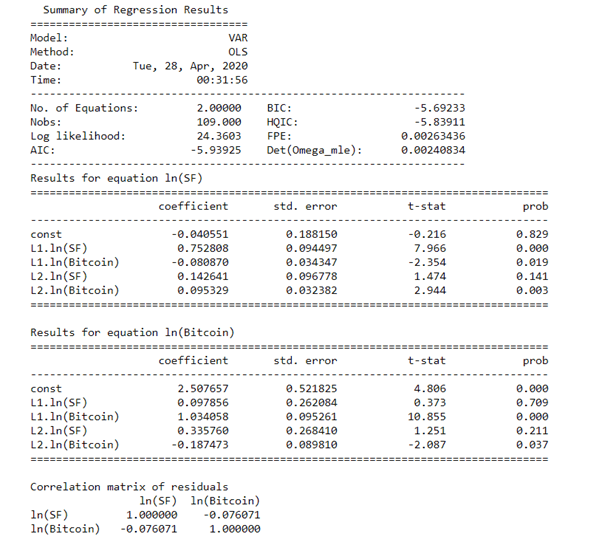 Lag selection: Based on Akaike’s Information Criteria (AIC), we deduce that p = q =2.

Let’s now fit our linear regression model using OLS. Here is the summary of our results: 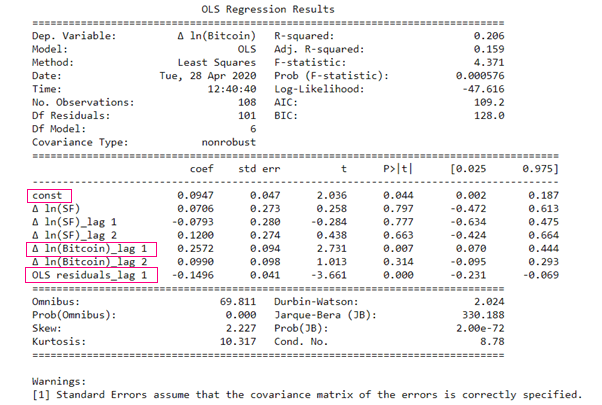 Interpretations of our results:

As we noted above, traditional diagnostic testing is now appropriate because the model does not suffer from autocorrelation in the OLS residuals. The Durbin-Watson statistic is very close to 2.

The OLS estimator on the lagged OLS residuals is statistically significant.

This means that only 15% of the disequilibrium will dissipate in the next period, meaning that adjustment is rather sluggish.

The OLS estimators on:

R-squared is decent at 21%, although it has substantially deflated from the R-squared of 95% resulting from PlanB’s model.

Stability of the model 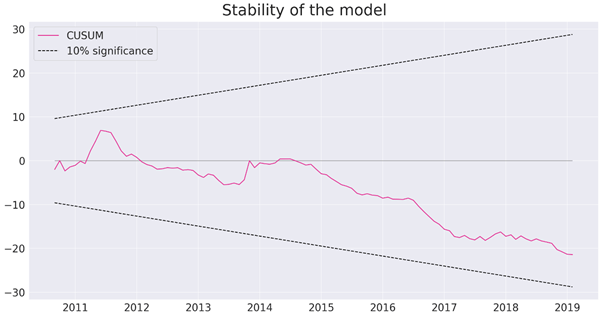 Conclusion: The CUSUM statistic stays within the 10% significance bands, leading us to fail to reject the null hypothesis of the stability of the model (i.e., there is no structural break) at the 10% level. Therefore, it is safe to assert that the new model is stable over time, unlike the original model from PlanB.

In our view, PlanB’s infamous model is misleading because the statistical results cannot be properly interpretable. This even prompted Vitalik Buterin, Etherum (ETH) co-founder, to tweet about it, criticizing the approach of being “post-hoc rationalized bullshit”. 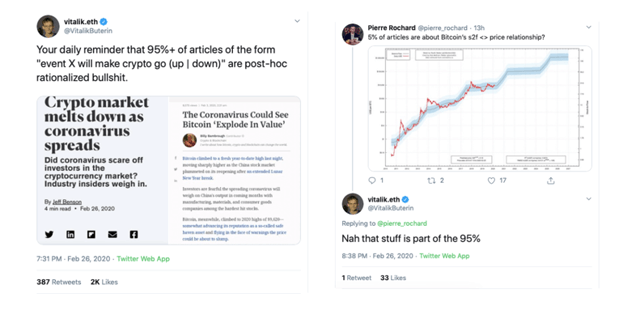 In our view, PlanB’s model emanates from a good intuition. This is why we have revisited the original model to account for the autocorrelation issue and attempt to investigate both short-term and long-term dynamics of the relationship between the market value of Bitcoin and the stock-to-flow ratio.

Unfortunately, our model cannot assert the presence of significant elasticities of the market value of Bitcoin with respect to the stock-to-flow ratio, both in the short and long run.

Our conclusions are as follows:

Disclosure: I/we have no positions in any stocks mentioned, and no plans to initiate any positions within the next 72 hours. I wrote this article myself, and it expresses my own opinions. I am not receiving compensation for it (other than from Seeking Alpha). I have no business relationship with any company whose stock is mentioned in this article.