Bitcoin’s PoW consensus mechanism is secured by consumption of electricity, this is what makes each newly mined Bitcoin have value. The newest model to predict Bitcoin price is based on this minimum Cost of Production (COP) for newly mined Bitcoin, and its accuracy is startling.

In the Bitcoin white paper, Satoshi laid out his vision for how Bitcoin’s incentive structure for miners mirrored that of physical gold, and how it is mined in the real-world by gold mining operations.

The steady addition of a constant of amount of new coins is analogous to gold miners expending resources to add gold to circulation. In our case, it is CPU time and electricity that is expended

A new Bitcoin valuation model put forth by DataDater, relies on this aspect of BTC production to calculate minimum price per coin, by using the minimum cost of production. 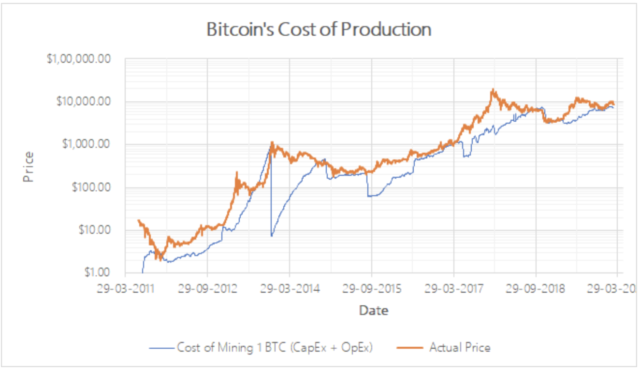 The result is a frighteningly accurate prediction model of the absolute bottom for Bitcoin during bearish price swings. As it currently stands, it costs around $7577 on average to mine a whole coin, depending on electricity rates.

DataDater’s COP model can be reliably used as a metric to help investors gauge exactly where the bottom may be, based on the cost incurred by miners to create a newly mined bitcoin.

What else can this new model tell us?

It has often been an anecdotal belief in Bitcoin that prices often follow hash rate. When we see the lead cryptocurrency’s hash rate rise to new highs, price usually isn’t far behind.

It makes this prediction based on the short life of the viability in ASIC miners and increasing hash rates, as new miners join the network. As miners invest in higher priced equipment, and more miners compete for the same rewards, we expect Bitcoin prices to rise because of increasing operating costs.

The COP model for valuation can also be applied to other PoW cryptocurrencies, a quality that other valuation models for Bitcoin often fall short of when applied to rival PoW coins.

By predicting the minimum cost of production for miners to produce other coins like BCH, LTC, or XMR, we can predict a COP valuation for these chains also. Additionally, the COP models can be used to compare the price of Bitcoin to other PoW coins.

DataDater has plans to do a future comparative analysis of the effect of other PoW coins on the Price of Bitcoin using the COP comparisons to add an unbiased perspective on how these coins truly interact in the market.

What do you think of the COP valuation model for PoW coins? Let us know in the comments!