Home
Internet
David Warner Instagram : We will both be winners: David Warner wins internet with heartfelt reply to a user before T20 WC final vs NZ


David Warner has won the internet with a heartfelt reply.&nbsp | &nbspPhoto Credit:&nbspAP

Aaron Finch-led Australia will square off against Kane Williamson’s New Zealand in the final of the T20 World Cup 2021 today (November 14) in Dubai. The much-awaited final will kick off at 7:30 PM IST. Both teams have had a dominant run so far and there are no clear favourites going into the summit clash.

Australia won 4 out of their 5 league stage matches to make it to the semi-final, where they defeated Pakistan in a thriller. On the other hand, NZ registered 4 wins in the league stage and conquered mighty England in the knockout game to punch their ticket to the grand finale.

Ahead of the much-awaited final, social media is flooded with wishes for both teams. IPL franchise Sunrisers Hyderabad (SRH) also sent its wishes on Instagram.

Commenting on the post, a user tagged former SRH skipper David Warner and wrote: “Warner vs Kane Man these two are in SRH too, this game is totally unpredictable.”

Warner, who will be opening the innings for Australia, noticed the comment and won the internet with a heartfelt reply. Check out – 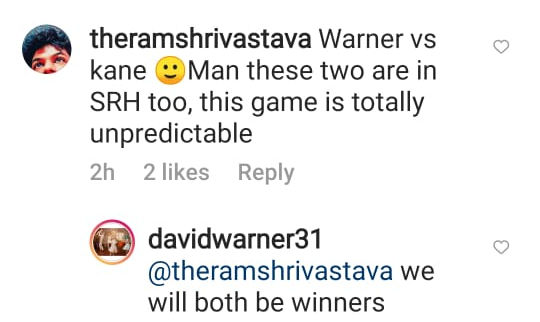 Warner has been with SRH since 2014.  He and Williamson have been teammates at SRH since 2015. Williamson made his IPL debut under Warner and played under him for a total of 4 years. He replaced Warner as SRH skipper in 2018 and 2019. In 2021, he was re-appointed as SRH skipper when the team management dropped and sacked Warner.

Warner played 2 matches under Williamson in IPL 2021 before being dropped again. As of now, both Warner and Williamson are part of SRH as the franchise hasn’t released the list of players it has retained before the IPL 2022 mega auction.

While Williamson is in line to continue his association with SRH, Warner has confirmed that he will be back in the auction pool.