You are here: Home / Domain - Host - VPS / A Look At The ‘GaaS’ (Cloud Gaming, Streaming, Games As A Service) Sector And The Main Companies Involved – Seeking Alpha

This article first appeared on Trend Investing on February 20, 2020; therefore all data is as of this date.

The coronavirus has resulted in hundreds of millions of Chinese being placed in lockdown or working from home. This has led to an enormous spike in online gaming. If this continues, or becomes a global pandemic, the gaming companies may be one of the few ways to benefit. The 5G rollout is also helping the cloud gaming sector.

One of the most popular ways of gaming nowadays is “multi-player” online gaming, where you compete against others online in a game. The latest way to facilitate this is via cloud gaming, wherein you just connect your device to access games held in the cloud.

What is cloud gaming, game streaming, and Games as a Service [GaaS]?

Using any connected device to play a game held on an online server (‘cloud’) is called ‘cloud gaming’, and the business to monetize it is known as ‘Games as a Service’ [GaaS]. Some also call it ‘game streaming’ (see below).

Wikipedia defines Games as a Service as:

In the video game industry, games as a service (GaaS) represents providing video games or game content on a continuing revenue model, similar to software as a service. Games as a service are ways to monetize video games either after their initial sale, or to support a free-to-play model. Games released under the GaaS model typically receive a long or indefinite stream of monetized new content over time to encourage players to continue paying to support the game. This often leads to games that work under a GaaS model to be called “living games” or “live games”, since they continually change with these updates.

Note: Cloud gaming can be further broken down to 3 groups: Peer-to-peer gaming, game streaming, and progressive downloading. Game streaming is the main type that is discussed in this article, where the game is held on a remote server.

In this article, you can consider cloud gaming/game streaming/GaaS as basically all the same thing, and I will use them interchangeably. The key with all is they involve the game being streamed from the cloud as a service.

The history of cloud gaming/streaming/GaaS

The idea of games as a service began with the introduction of massively multiplayer online games (MMOs) like World of Warcraft, where the game’s subscription model approach assured continued revenues to the developer and publisher to create new content. Over time, new forms of offering continued GaaS revenues have come about. A significant impact on the use of GaaS was the expansion of mobile gaming which often include a social element, such as playing or competing with friends, and with players wanting to buy into GaaS to continue to play with friends. Chinese publisher Tencent was one of the first companies to jump onto this around 2007 and 2008, establishing several different ways to monetize their products as a service to Chinese players, and since has become the world’s largest video game publisher in terms of revenue.

The advantages of cloud gaming/streaming/GaaS

One key advantage is that those with a smartphone or other connected device can access cloud gaming without needing expensive hardware (high end PCs, smartphones, game consoles) as the cloud server runs the game and streams a video of the game play to you. Hence, it is often referred to as a “game streaming service”.

Each year, games have grown to be more complex and higher resolution. This has meant that users are always having to update their PCs etc. to run the latest games. However, with cloud gaming/streaming, this is no longer necessary. All you need is a good internet connection.

The other key advantage of cloud gaming is that you can play against other players online. This increases the fun as well as adding a social interaction.

In the past, a slow internet connection has been the main disadvantage of cloud gaming/streaming. No gamer likes latency (“data delay”).

Given the need for massive data flow across the internet at the fastest possible speeds with low latency, then 5G should be a significant boost to the cloud gaming/streaming/GaaS sector as 5G rolls out globally.

As the cloud gaming model requires high transmission speeds, the introduction in 5G architecture incentivizes platform providers to expand their network in the region. The 5G architecture effectively deals with latency issues, providing a seamless gaming experience to customers.

How does cloud gaming/streaming/GaaS make money?

Some services are free, and they hope to upsell you at some point say to buy more hours or to buy premium games etc. Others simply charge a monthly or yearly subscription fee. Below are a few examples.

Cloud gaming is forecast to take off

Google Stadia was launched in November 2019. At the launch, Google stated:

“The service will start with a slate of 22 games and stream 4K videos at 60 frames per second, which can also be accessed through Google’s Chromecast and Pixel devices. Google is offering the 4K version as part of its premium service, Stadia Pro, priced at $9.99 per month. The free high-definition version is expected to roll out next year. “We have over 450 games in development right now that will be coming out in 2020 and beyond”.

Google Stadia using a smartphone connected to a console 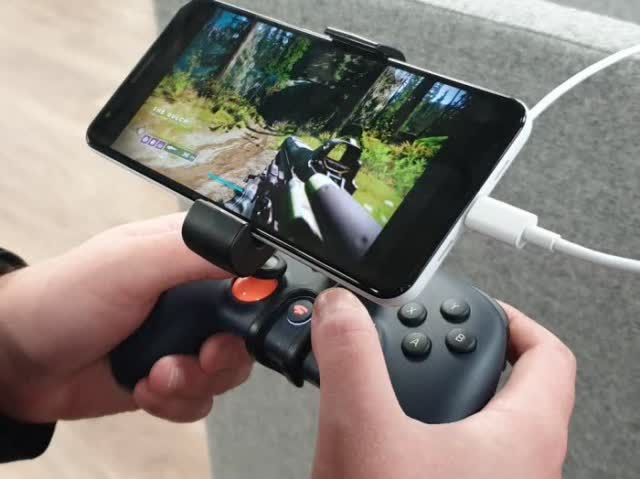 Apple’s Arcade subscription service was launched in September 2019 and costs £4.99 in the UK or $4.99 a month in the US (or $49.99 per year), and is available on iPhone, iPad, Mac, and Apple TV. The service features premium games that are untainted by in-app purchases and ads. In total, there are 103 games available as of December 2019.

A Digital Trends review of the service quotes:

Project xCloud is not designed to replace traditional disc-based and digital gaming. Instead, Microsoft hopes for it to open up console-quality gaming to those who currently lack the necessary hardware to do so or can only play on mobile devices. It also means players will be able to enjoy a particular Xbox or PC game they’re interested in without having to purchase an entire system…..Project xCloud will use Microsoft’s Azure datacenters’ hardware to render gaming experiences remotely, and the games will then be streamed to your device of choice. 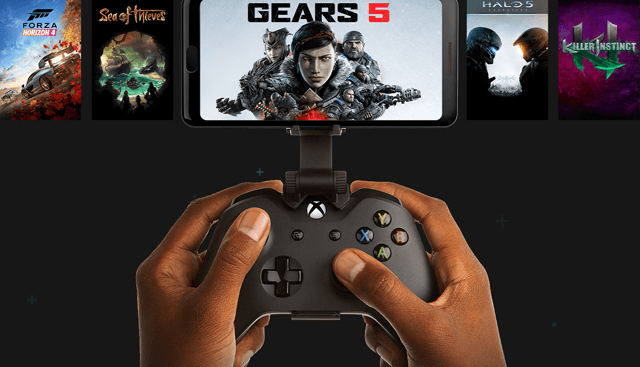 The Sony PlayStation Now game streaming service has been operational in the US and Europe since 2015 and costs $60 per year ($5/month), and offers access to 800 games. It is now being rolled out to more countries. Apparently there are some issues trying to use PlayStation Now from your smartphone. Sony state:

PlayStation Now allows users to stream 800 different games to their PlayStation 4 or PC. 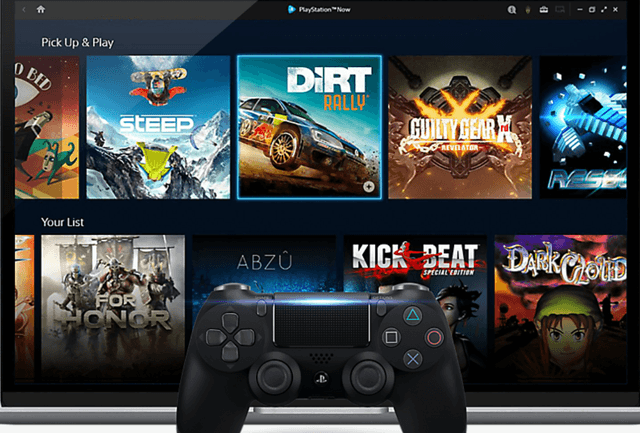 Tencent START gaming service was launched in December 2019 and is currently in the beta testing version in China. A recent Games daily Biz report quotes:

Tencent is trialing its START cloud gaming service with a handful of titles through February 2020 in order to test and refine the service ahead of a full commercial launch next year….. The START platform currently integrates with WeGame, Tencent’s PC games distribution platform…..The company already possesses a license for monetization within the country, but there’s still the notoriously strict and government-run games approval process to deal with.

Tencent will use Nvidia’s GPU technology to power Tencent START

Note: Of the above main players, Nvidia, Sony, and Tencent are the most leveraged to games, but none are really entirely pure play game streaming or gaming companies.

Some other smaller players

Cloud gaming/streaming is still quite new; however, in the past, its growth was hindered by slow internet speeds. That is starting to change now with 5G and faster internet speeds, and new game streaming services. This could result in a surge of cloud-based gaming/GaaS revenues, similar to what we have already seen with cloud computing SaaS businesses.

For consumers, the ability to simply access a large library of the latest and best games on your own device, and to interact with other gamers globally online, all for a small monthly subscription fee, will be appealing.

The main cloud gaming/streaming/GaaS players are Alphabet Google (Stadia), Apple (Arcade), Microsoft (xCloud coming soon), Nvidia (GeForce NOW), Sony (PlayStation Now), and Tencent (START is in testing phase). It is arguably still too early to assess market share by company, and with Amazon soon to enter, I would expect a shake-up in market share.

For investors, the main problem is that none of the above leaders in game streaming are pure play gaming companies. Nvidia make most of their revenue from (gaming) CPU chips so are arguably the most pure play gaming stock of the main players (also with a game streaming service GeForce NOW), and hence would probably be the best way to play the cloud gaming/streaming/GaaS thematic for now. Tencent gets about 30% of revenues from gaming, and Sony is about the same (~30%), so would rank as the next best ways to play the sector.

My top three cloud gaming/streaming companies for now would be Nvidia, Tencent (beta stage), and Sony; noting Nvidia is the purest play.

I will most likely do an update late in 2020 when perhaps we have a better idea of market share per company in the sector.

As usual, all comments are welcome.

Thanks for reading the article. If you want to sign up for Trend Investing for my best investing ideas, latest trends, exclusive CEO interviews, chat room access to me, and to other sophisticated investors. You can benefit from the work I’ve done, especially in the electric vehicle and EV metals sector. You can learn more by reading “The Trend Investing Difference“, “Subscriber Feedback On Trend Investing”, or sign up here.

Disclosure: I am/we are long ALPHABET GOOGLE (GOOG), TCEHY. I wrote this article myself, and it expresses my own opinions. I am not receiving compensation for it (other than from Seeking Alpha). I have no business relationship with any company whose stock is mentioned in this article.

Additional disclosure: The information in this article is general in nature and should not be relied upon as personal financial advice.