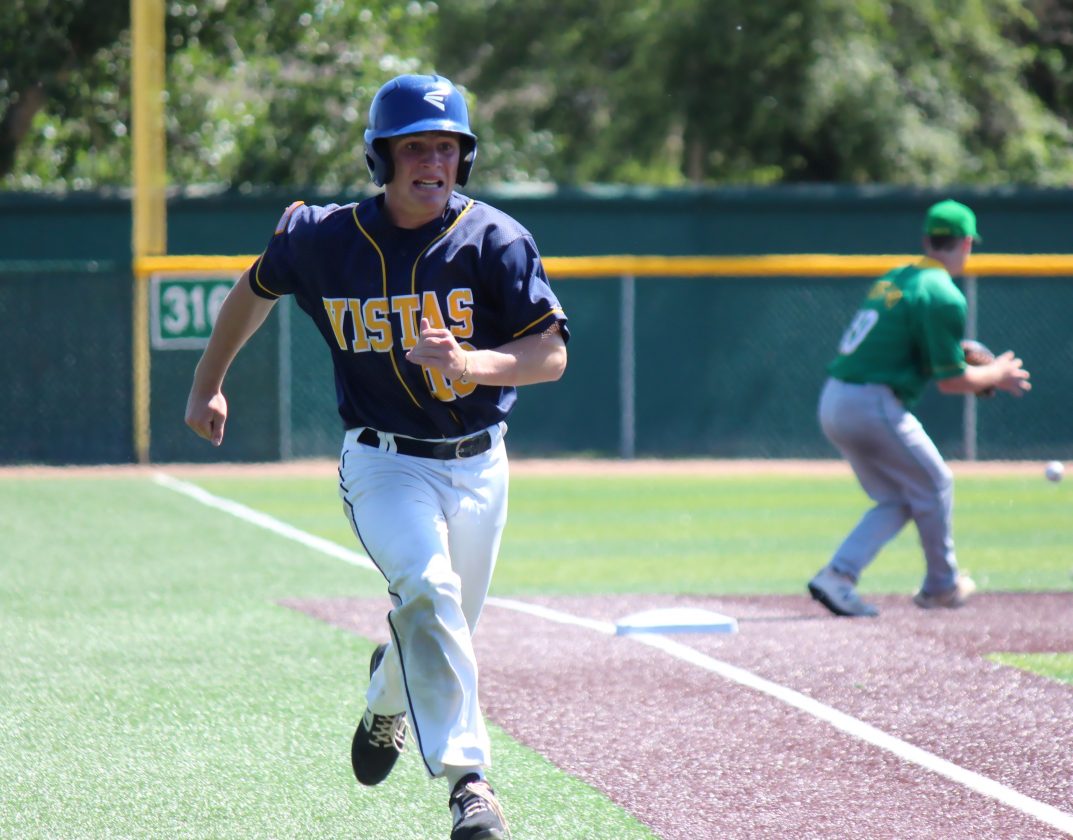 The sixth inning alone would have made for an entertaining 9-6 ballgame.

Instead, that was merely one segment of what turned out to be a long, drawn-out marathon Friday afternoon between the Minot Vistas and the Mandan Chiefs. The second game of the fourth annual Heilman’s Performance Tournament in Minot lasted over three hours and saw 31 combined runs scored.

Mandan plated one more run to outlast the hosts, 16-15.

“As soon as they responded and we saw that it’s going to be competitive, our M.O. lately has been to turn it off until we are comfortable,” Vistas head coach Pat Arntson said. “Like them embarrassing us on our home field and making the lead big enough where we shouldn’t come back and win. Then, it’s like, ‘Oh, now we can try.’ It’s a tough one to start with, for sure.”

In the nightcap, Minot was held to six hits in an 8-4 loss to the Bismarck Governors.

Prior to facing the Vistas, Mandan was coming off a heartbreaking 6-5 loss in the tournament opener early in the day against East Grand Forks. The game ended with the Chiefs’ tying runner getting tagged out diving for home plate.

The first six Vistas’ batters reached base in the bottom of the first inning. Minot was up 4-0 before a flyout recorded its first out of the game.

When Minot’s first at-bats were all said and done, the Vistas batted around and left the bases loaded. Jack Plemel, Logan Merck and Calvin Watkins all collected RBIs. Chase Burke, swinging for a grand slam, ended the inning with a sharply hit fly ball that was caught on the warning track.

The score remained 4-0 in Minot’s favor.

Mandan pulled one run back in the top of the second inning with a bases-loaded sacrifice fly by No. 9 hitter Stetson Kuntz. But Minot quickly got that run back in the bottom half.

Not going away, the Chiefs pulled even at 5-5 with a four-run fourth inning. Then, after a scoreless fifth inning, things went completely haywire.

Mandan exploded for nine runs in the sixth inning. Minot punched back with six runs in the bottom half.

“We should be rusty,” Arnston said. “We aren’t harping on them that we are playing bad. We are harping on not trying. We know we are going to screw up. Typically, nobody feels worse about screwing up than the guy that screwed up. So, not going to harp on that. Yes, we have to play better, but we just have to give ourselves a shot by getting after it.”

Two more runs by Mandan in the seventh brought Minot back to the plate down to its final three outs, trailing 16-11. With Watkins and Dylan Vigested leading the boisterous yelling and cheering from the dugout, the Vistas mounted one last rally.

Plemel and Kersey Harris each scored on passed balls to cut the deficit down to 16-13. Trent Greek and Hunter Ruzicka both walked, which brought the tying run to the plate: pinch-hitter Vigested.

On the first pitch that Vigested saw, he smoked a shot deep to left field. The Vistas’ bench jumped up in a hurry, thinking their vocal catcher had delivered a monumental game-tying home run.

Not quite. The ball bounced off the wall for a two-run double.

Vigested was left stranded on second base when Mandan center fielder Blake Arenz made a running catch to his right to rob Burke, ending the lengthy affair at 16-15.

“Sure,” Arntson answered about it being a positive thing that the Vistas managed to claw back. “I don’t know. The bigger problem is that the whole situation begins. We had a lead at home, in front of our fans in our home tournament. So, for that not to be enough is a problem.”

“Everybody has to be available,” Arntson said about his pitching staff moving forward for the rest of the tournament. “Obviously, there are guys that threw today that can’t come back or won’t come back based on how they feel with their arm.”

Tyler Harbort got the ball for the Vistas in the nightcap against the Bismarck Governors. In six innings on the mound, Harbort surrendered eight runs (six earned) and had to pitch through multiple defensive miscues made by the Vistas.

The hardest hit ball was a solo home run out to the trees in left field by Cade Feeney.

Relief pitcher Jackson Uhler finished the job for the Governors. He struck out the side in the sixth inning, and limited Minot to a three-run rally in the bottom of the seventh.

Nygaard and Ruzicka both dropped in RBI singles, and Aydan Almy drew a bases-loaded walk.

The Vistas wrap up pool play with two more games on Saturday. They are scheduled to play Pierre Post 8 at 2:30 p.m. and then East Grand Forks at 7 p.m. The top two teams in pool play advance to the tournament championship game at noon Sunday at Corbett Field.

Today’s breaking news and more in your inbox