In 1973, the U.S. Supreme Court issued a landmark decision in which the Court ruled that the Constitution of the United States protects a pregnant woman’s liberty to choose to have an abortion without excessive government restriction. But now the Supreme Court wants to turn the U.S. into a dystopian hellscape by overturning abortion rights.

According to the initial draft majority opinion written by Justice Samuel Alito that circulated inside the court, “Roe was egregiously wrong from the start.” The document also stated that “We hold that Roe and Casey must be overruled. It is time to heed the Constitution and return the issue of abortion to the people’s elected representatives.”

The decision, which is expected to go formal in June, will open up the nation’s 31 Republican-controlled states to pass severe or total abortion restrictions. And this did not sit well with people who went into tears watching Elizabeth Warren fuming with anger on Tuesday when she gave her speech.

So they took to the internet to show rage and despair over the American court system that yet again failed its people, especially those at their most vulnerable. 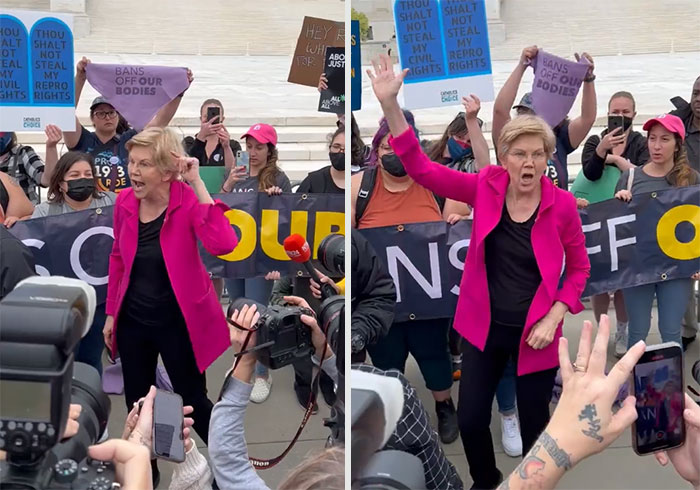 ‘I am angry, upset and determined,’ Massachusetts Democratic senator Elizabeth Warren said in her powerful speech after joining a protest at the Supreme Court on Tuesday

Please watch this video. @ewarren is channeling the rage we are all feeling right now. Thank you, @SenWarren.pic.twitter.com/uIlPXeZGzL— Eliza Orlins (@elizaorlins) May 3, 2022

The news did not sit well with people on the internet either, as many took it to social media to share their rage, experiences and thoughts about the court overturning abortion rights