In the viral video, the 80-year-old not only lifts the barbell but also holds it for a few seconds above her head 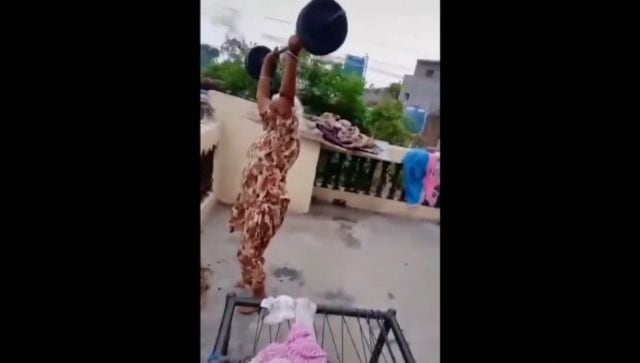 A video of an elderly woman performing one of the toughest exercises has created a lot of buzz on the internet. In the short clip, the 80-year-old woman can be seen doing deadlifts, which is considered to be one of the most difficult workouts.

The woman was apparently given the task by her grandson, who was filming the video. In the video, she can be seen attempting to lift a barbell on the terrace of a house. The weights attached to the barbell seem to weigh a lot. The boy is shocked after watching the efforts of his grandmother as she successfully completed the challenge.

The 80-year-old not only lifts the barbell but also holds it for a few seconds above her head. In the end, the boy gets up and helps his grandmother in putting the barbell down.

The video has been shared by a page named ‘Punjabi Industry’ on Instagram with a Punjabi song as the background score. Since being posted, the video has received over 4,500 likes on Instagram. Users were stunned after witnessing the dedication of the elderly woman. One of the users wrote in the comment section, “where did you find this video? She is my grandmother.”

This is not the only such clip to have garnered attention on the internet. A few days ago, another clip of a 90-year-old man trying bowling for the first time in his life with his granddaughter created waves across social media. Despite experiencing a spinal cord injury in his twenties, the old man persisted and built a life for himself. The video was posted on Instagram by ‘ptwithdrea’. It has garnered over 7,000 views and more than 491 likes so far.

Last month, an elderly woman performing the iconic dance number Sammy Sammy from the movie Pushpa: The Rise led users to nickname her as ‘DJ Dadi’.