You are here: Home / Internet / American Tower: An Investment In 5G And The Internet Of Things – Seeking Alpha

In the coming years, 5G networks and the Internet of Things (IoT) will be significant growth drivers of mobile data usage. As one of the largest competitors in the telecommunications real estate market, American Tower (AMT) and its shareholders are well positioned to capture value from these technologies.

In addition to being 10-100x faster than 4G, 5G will allow wireless networks to accommodate more devices transmitting real-time data. For this reason, the IoT is expected to experience rapid growth as 5G is deployed.

These innovations have the potential to transform the world in countless ways, some of which haven’t even been imagined yet.

Connected machinery could improve safety and efficiency in manufacturing and construction. Augmented and virtual reality could be used in classrooms to enhance the educational experience.

These examples just scratch the surface of how 5G and the IoT could change daily life. But in order for any changes to be realized, there must be wireless networks capable of supporting the increases in connected devices and data usage. For this reason, I believe American Tower is a compelling long term investment idea.

American Tower owns and operates telecommunications real estate in the United States and internationally. They generate revenue primarily by leasing vertical tower space to tenants, which utilize this space to install communications equipment.

Most tower sites operated by American Tower are capable of supporting 4 to 5 tenants. These tenants sign long term, typically non-cancellable, leases with built in escalators.

The map shown below depicts the countries in which American Tower operates, as well as the number of tower sites in each country. 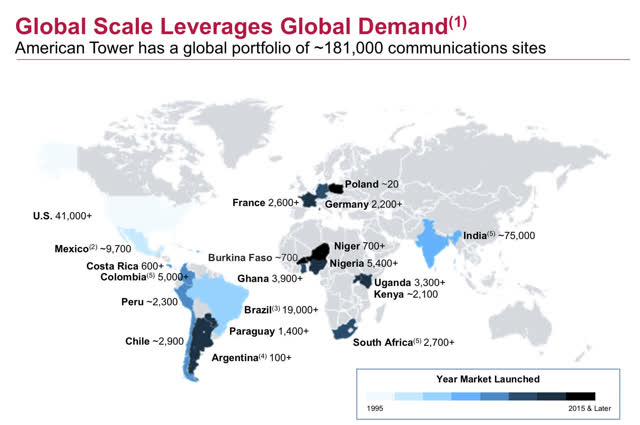 The cost advantages arise from their large network of tower sites. They own and/or operate roughly 41,000 sites in the United States and 137,000 sites internationally. A new competitor wishing to enter the market would find it very costly to build out such an extensive network. American Tower estimates that, in the United States, tower construction typically costs $250,000 to $300,000. Further strengthening American Tower’s advantage is the fact that, because most tower sites can support 4 to 5 tenants, it costs almost nothing to add additional tenants to an existing tower.

The high switching costs arise from the fact that it is costly for wireless carriers to remove their equipment and relocate to a different tower. Jay Brown, president and CEO of Crown Castle International (CCI), has stated that it would cost between $35,000 and $40,000 to remove equipment from one site. American Tower estimates that it costs roughly $1,800 per month for a carrier to lease tower space, meaning a carrier would spend as much moving the equipment as they would spend leasing the site for 19 to 22 months.

An important driver of revenue growth for American Tower has been the increasing number of connected devices combined with increasing data consumption around the globe. In the United States, data usage grew 79% annually from 2006 to 2019. 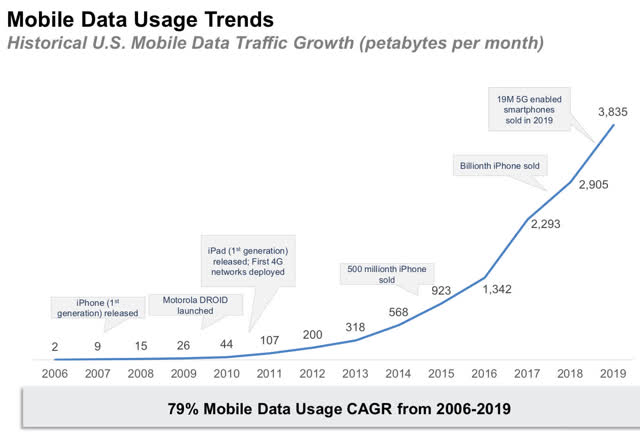 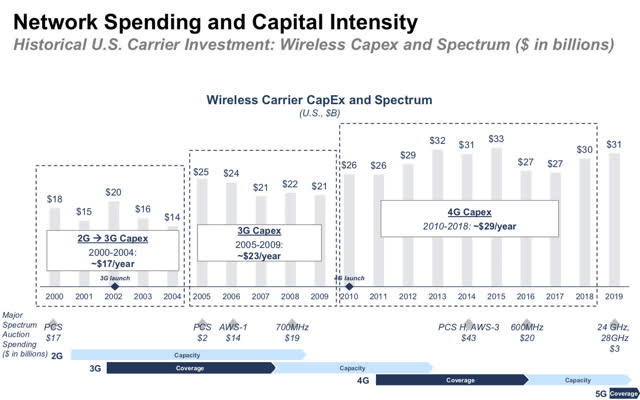 In the coming years, this trend will likely continue. 5G and the IoT should act as growth catalysts, driving further increases in connected devices and data usage. 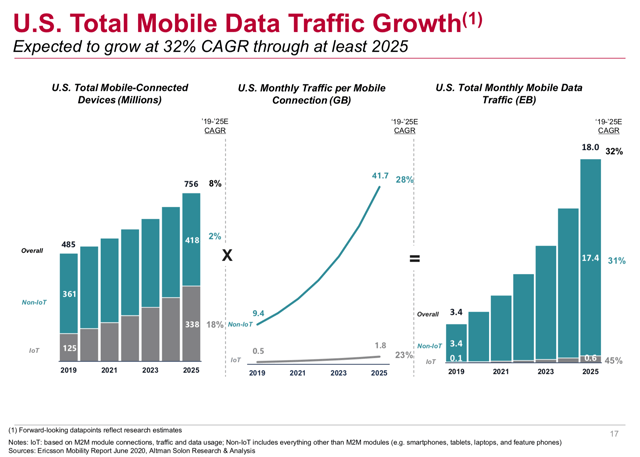 It’s important to note that, despite the United States being the clear leader in mobile broadband penetration, growth is still expected to be strong in the coming years. 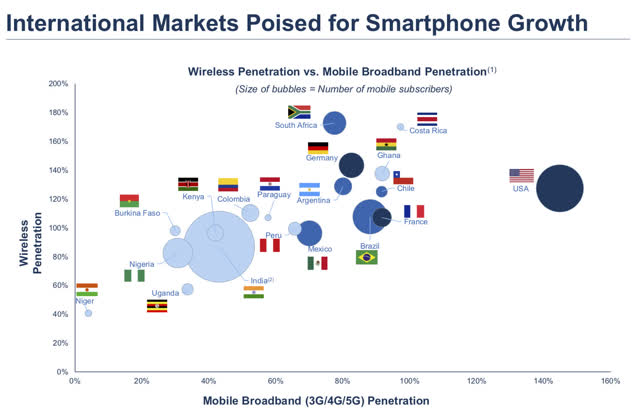 The trend is the same internationally, where increases in smartphone penetration and data consumption are expected to drive growth in wireless carrier spending. There are sizable opportunities even in advanced markets like Germany and France; and developing markets like India, which has roughly one-third the mobile broadband penetration of the United States, have even greater potential for future growth. 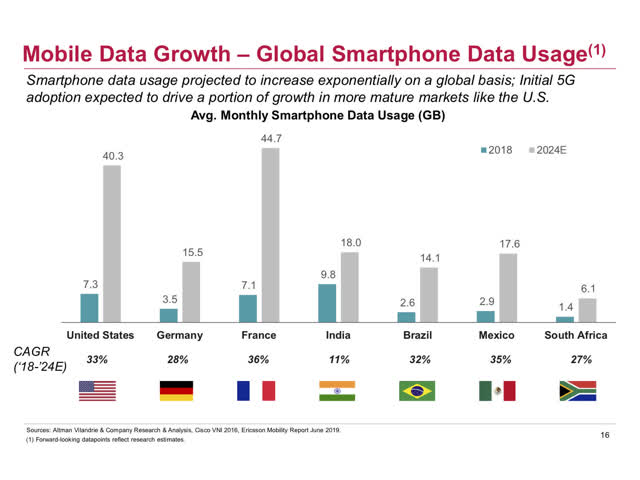 American Tower carries a substantial amount of debt. Many of their towers are located on sites operated pursuant to a ground lease, and this makes the business very capital intensive.

As of Q2’2020, the company had over $28 billion in long term debt and lease obligations. The debt-to-equity ratio reached 8.8x, and has been rising steadily for several years. And as debt has risen, shareholder equity and book value per share have decreased accordingly. This is depicted in the chart below. 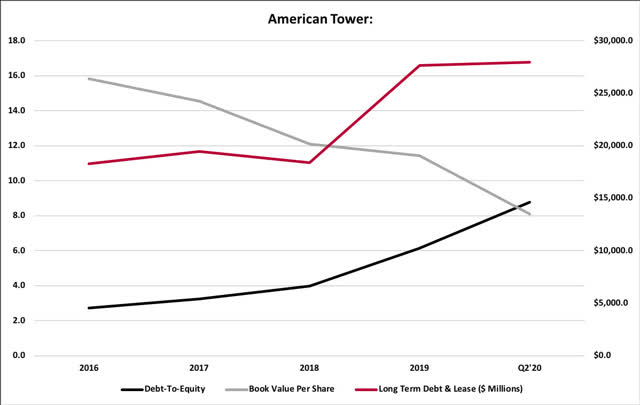 Despite the large amounts of debt, American Tower has posted solid financial results in recent years. Revenue has grown at 13% annually over the past 5 years, and free cash flow has grown at 12% annually in the same time period. This is depicted in the chart below.

Although a significant portion of revenue comes from the United States (57% in Q2’2020), revenue has generally been growing in all geographic regions. The one exception is India (categorized as Asia); revenue from India dropped 21% in 2019—but this was due to the impact of a one time settlement payment from Tata Telecommunications that boosted 2018 revenue by $333.7 million. The chart below shows revenue by geography from 2017 to 2019. 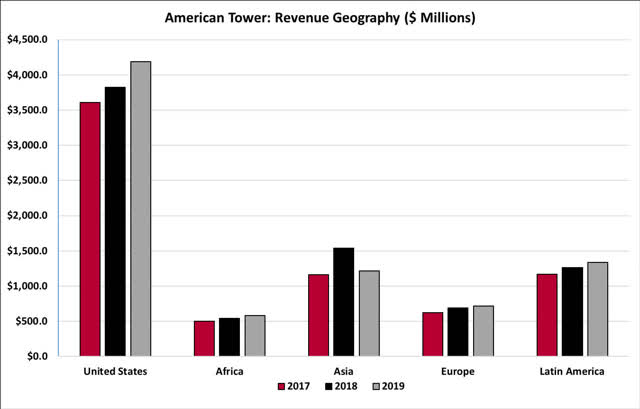 In Q2’2020, total revenue increased only 1.2% to $1,913 million. This deceleration was due in part to a decrease in international property revenue of 4.3%, driven by revenue decreases in both Latin America and India. This was related to the negative impact of foreign currency exchange rates; on an FX-neutral basis, revenue grew 7.3%.

Gross margins and operating margins remained relatively consistent at 72% and 36%, respectively. Funds from operations (FFO), a preferred measure of profit for REITs like American Tower, increased 4% to $863 million. When adjusted for capital expenditures and other recurring expenses, adjusted funds from operations (AFFO) increased 1.5% to $2.07 per share.

As 5G networks are deployed, the number of connected devices and data usage will increase across the globe. Wireless carriers will need to update and densify their networks to support these changes. And American Tower looks to be a relatively low-risk investment strategy to capitalize on this trend.

Disclosure: I am/we are long AMT. I wrote this article myself, and it expresses my own opinions. I am not receiving compensation for it (other than from Seeking Alpha). I have no business relationship with any company whose stock is mentioned in this article.