You are here: Home / Internet / Antisemitism on the Internet – Israel Today

1. Antisemitic tweets – European countries with the most

France (9,150) is followed by Germany, Spain, Belgium, Ireland and Austria.

Diaspora Minister Omar Yankelevich presented the EU Ambassador with data regarding antisemitism on Twitter, as collected by the Diaspora Ministry’s Internet monitoring system. Omar and the EU ambassador agreed to cooperate in order to keep Jewish communities in Europe safe and to monitor online antisemitism. 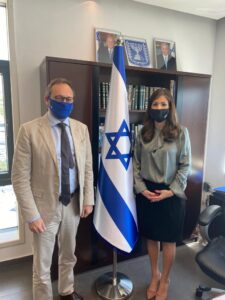 Diaspora Minister Omar Yankelevich presented the data at a meeting held last weekend with the EU Ambassador to Israel, Emanuel Joffre, in which they agreed to cooperate in protecting Jewish communities in Europe, monitoring online antisemitism and preserving the religious freedom of European Jews. According to Yankelevich, the difference in the number of tweets between states illustrates the importance of extensive legislation and decisive enforcement against incitement to hatred.

In view of the data presented, the Minister sought to increase cooperation with the EU and streamline funding that communities receive from the EU for security measures. This is to ensure the security and safety of the Jewish communities in Europe. The ambassador expressed his willingness to work in close cooperation with Israel, against the phenomenon of increasing antisemitism on the Internet and “on the ground.” The two also discussed creative ways to connect Jewish communities in Israel with communities across Europe.

Minister Yankelevich: “European Jews are experiencing a difficult period during the Corona crisis. Over a thousand Jews have died of the virus, including rabbis and community leaders. Especially during this period we must work in full cooperation with the EU to maintain the safety and existence of Jewish communities in Europe. I thank the ambassador for his willingness to assist with this issue as well as to monitor anti-Semitism on the Internet and to preserve the religious freedom of the Jews in the EU countries. This is our shared responsibility.”

2. Israel calls on Internet giants to change their enforcement policy against antisemitism and hatred of Israel:

“Social networks have allowed antisemitic hate speech to thrive for too long.” The Minister of Strategic Affairs, Orit Farkash-Hacohen (pictured top), called on Internet giants to change their enforcement policy regarding hate speech, including incitement to violence, de-legitimization of the State of Israel and expressions of antisemitism.

In an article published in Newsweek, the second most widely circulated publication in the United States with over 30 million hits per month, Farkash-Hacohen wrote:

“At a time when the whole world is concerned over the biggest health crisis we have seen, the Internet is suffering from an infection no less severe – the VIRUS OF HATRED. Media giants have allowed the discourse of hatred, incitement and anti-Semitism to thrive online for too long. The time has come for social media executives to take responsibility and clean the Internet of the poison that floods it. Freedom of expression is not the freedom to spread hatred.”

The article was published as part of a broad move, led by Minister Farkash-Hacohen and the Ministry of Strategic Affairs concerning social media companies, pushing them to adopt clear definitions against manifestations of de-legitimization of the State of Israel, as an integral part of enforcing hate speech policy online.

The minister referred to messages recently voiced by Facebook management, saying more should be done in this area. She said:

“For years, while acknowledging there was a problem and saying they have more to do, social media giants for the most part let the problem fester and took few proactive measures to deal with online hate. Their terms of use are verbose and subject to interpretation when it comes to implementing them. While there are signs that they have finally begun to take the issue seriously, we’ll believe it when we see it—through action taken.”

Minister Farkash-Hacohen recommends a two-stage plan. She calls on companies to adopt the IHRA definition of international antisemitism and to implement a policy of transparency and reporting on the implementation of the definition. In her article, the minister affirms freedom of expression and the right to criticize the State of Israel and its activities.

The minister concluded her article:

“Well, it is about time all social media leaders start acting on it regarding hate speech. The sooner the better. It is social media platforms that control today’s perception and public opinion. Such immense influence must be accompanied by accountability.”