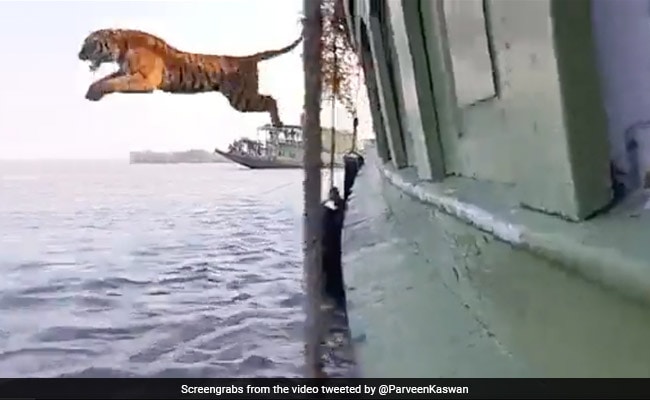 A Royal Bengal Tiger that jumped from a boat while being carried to the Sundarbans.

The internet has gone crazy over a video of a Royal Bengal Tiger that jumped from a boat while being carried to the Sundarbans for release into the wild. The video shows the rescued tiger jumping into the water, and without even looking back, swims its way into the natural habitat.

That tiger sized jump though. Old video of rescue & release of tiger from Sundarbans. pic.twitter.com/u6ls2NW7H3

It was shared by Indian Forest Officer (IFS) Parween Kalwan on Twitter with the caption: “The Tiger sized jump though. Old video of rescue and release of tiger from Sundarbans.”

Since being posted, the video has been watched over 88,000 times, liked by 4,000 people, and is still gaining popularity.

One Twitter user named ‘Mitra Joshi’ commented on the video: “Reminds me of Life of Pi! Richard Peter never looked back :)”

In February, another such video was shared on Twitter by the same IFS officer, which captured the rescue and release of a Himalayan Black Bear. The video was captioned: “How freedim loks like!! A Himalayan Black Bear was stranded. Our teams launched operation since morning. Rescue work was successful without any injury to people and animal, Team Work.”

Mr Kaswan had later tweeted, “Various teams reached location for rescue and also for crowd control. The location was very far from Forest so rescued. After medical check up the animal was released in its natural habitat.”

That video also got a lot of traction on social media after posting, and Mr Kaswan and his team were praised for their good work.

Videos from the wildlife are often a hit on social media. Users enjoy the shots which show these animals enjoying in their natural habitats.