The city considered to be the nation’s tech capital can’t escape some troubling statistics: One in eight San Francisco residents doesn’t have access to high-speed internet at home, and one in seven public-school families doesn’t have a computer with internet connection. Like education and income gaps, the “digital divide” separating technological haves and have-nots across the U.S. looms over the Bay Area as well, intensifying the region’s widening economic disparity. The 100,000 or so San Franciscans without fast, affordable, reliable connections tend to have a tougher time applying for jobs, educating their children and staying healthy, among other challenges that make it hard to keep up with life in 2020.

The past five months of lockdown have cast a spotlight on the problem, as white-collar workers with fast home internet manage to avoid the harshest consequences of the coronavirus pandemic and the state’s shelter-in-place mandates.

“This issue rang true five-plus years ago … and unfortunately it has manifested itself during COVID as one of the most pressing issues that exacerbates the inequality in our city,” said former San Francisco Supervisor Mark Farrell, who served as the city’s mayor for a six-month period in 2018. 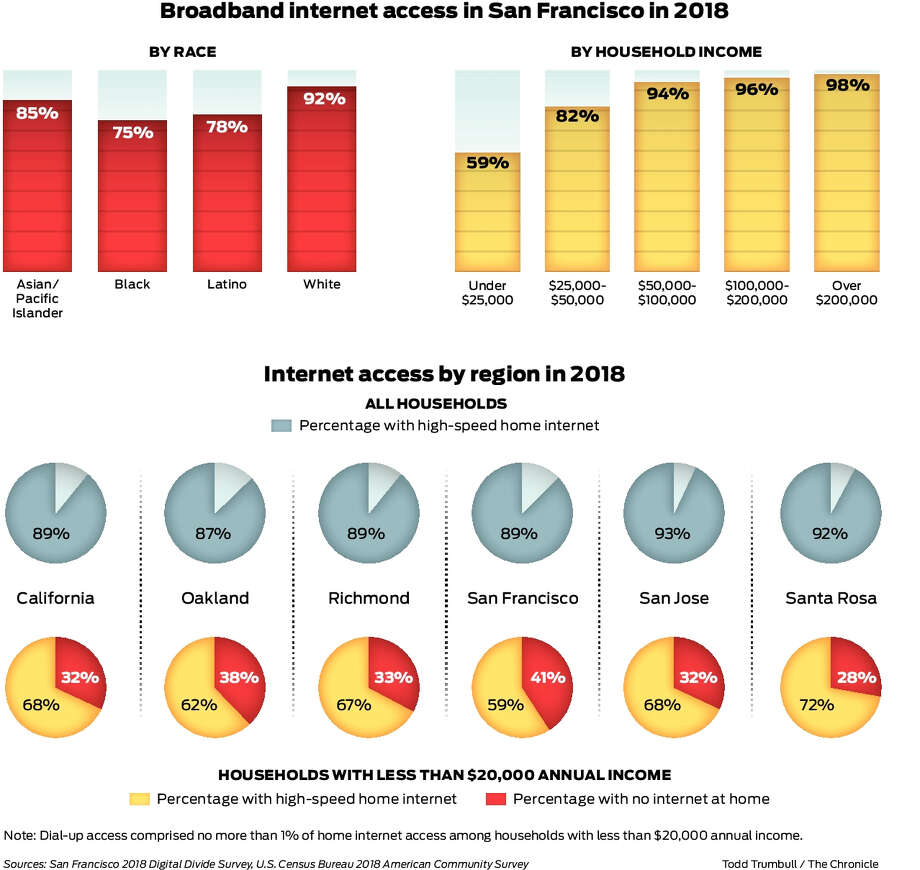 During his nearly eight years in office, Farrell pushed a simple but enormous proposal to solve the problem: lay publicly controlled fiber optic broadband infrastructure beneath city streets, linking everyone in San Francisco to a giant pipeline of affordable high-speed internet. It would be a close approximation of the popularized notion that internet should function as a household utility, like water or gas.

The up-front cost of his design, outlined in a 2017 feasibility report, was estimated at $1.5 billion to $1.9 billion, rendering it politically moot. (The cost, some say, could rise north of $2.5 billion.) Plus, had it been approved, it likely would have taken at least three years to build, if not, as some speculated, a decade. Since the end of Farrell’s tenure in 2018, the idea has been shelved.

But shelter-in-place has cemented home internet as a basic necessity, reinvigorating the notion that web connections should be universally accessible and affordable, just like landlines and cell service.

“Internet access in 2020 should be viewed in many ways as a human right,” Farrell says.

It’s an idea that has been widely professed for years by politicians from here to Capitol Hill, but has yet to bear out in any U.S. city. Is it time for San Francisco to lead the way? 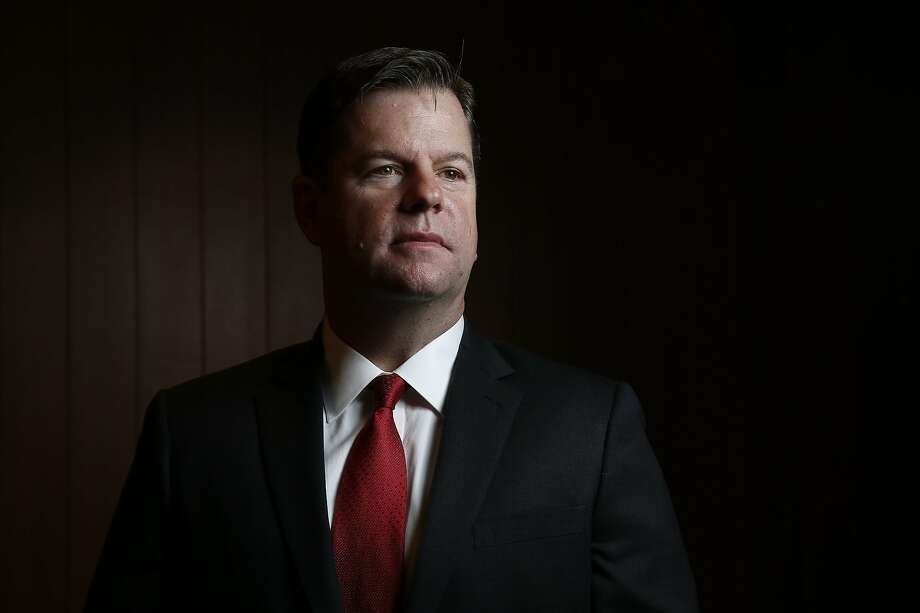 San Francisco Supervisor Mark Farrell pushed a simple but enormous proposal during his time in office to solve the problem: lay publicly controlled fiber optic broadband infrastructure beneath city streets, linking everyone in San Francisco to a giant pipeline of affordable high-speed internet.

The moment San Franciscans went into lockdown in March, internet usage skyrocketed. Service providers reported an immediate 30% surge in activity across the board that has not tapered off even after five months. Many also have reported record signups during the summer as high-speed, affordable home internet transformed overnight from a convenience to a vital lifeline.

By and large, internet service in the U.S. is a duopoly controlled by Comcast, with its cable infrastructure, and AT&T, with its telephone lines. San Francisco, however, is a relative outlier, served by a competitive mix of internet service providers (ISPs) with stakes in the ground, including Sonic, Monkeybrains and Wave. The average cost of high-speed home internet is about $50 per month, according to the city Department of Technology.

“In San Francisco, the infrastructure existence and availability isn’t the primary problem. It’s adoption,” says Dane Jasper, CEO of Sonic, the third-largest internet provider in the city. The company, based in Santa Rosa, has hooked fiber optic wiring into about one-third of San Francisco homes and has seen record sign-ups since shelter-in-place.

Sign-up fees, monthly bills, equipment costs and digital literacy pose barriers to the city’s most vulnerable residents — low earners, seniors and the disabled, and those who didn’t grow up speaking English.

“The issue breaks down to affordability, education, knowledge and equipment. Does the household know why and how they want this (high-speed internet) and how to use it?” Jasper says. “But affordability is key.”

“We have great choice with our ISPs in the city,” Gerull said. “But there’s still a very large gap among residents.”

Last year, the city published a five-year plan to address internet inequity. It identifies affordable broadband, digital literacy and accountability at the city level as the primary goals through 2024.

“Providing more ubiquitous internet service is where we want to be as a city,” Gerull said. “There are lots of ways to do it.”

The city has a fiber backbone that serves police stations, firehouses and all its municipal buildings, and has lately been taking baby steps to extend that connection to low-income households, free of charge. The Fiber to Housing program, for example, has laid fiber into 4,200 apartments in the Bayview, North Beach and the Tenderloin in the last two years, Gerull said.

In the midst of the pandemic, the city has also been extending fiber to homeless shelters and coronavirus testing sites.

“When COVID hit, we swung into action,” Gerull said.

In the past five months, with the sudden burden on families to homeschool their children and participate in video-conference classrooms, the city has started bringing internet to public housing apartments that are home to high concentrations of students in the San Francisco Unified School District. City technicians connected 1,300 of them during a two-month stretch of the summer, Gerull said.

The school district has distributed 35,000 laptops and 3,500 WiFi hotspots to help bring students up to speed before the school year starts, and some ISPs are offering residents free sign-ups and temporarily discounted rates. The city also supports internet education courses for the approximately 14% of San Franciscans who lack basic computer literacy.

Though these moves amount to incremental progress, they represent a radical precedent, said Preston Rhea, director of engineering, policy program, at Monkeybrains, a small ISP in San Francisco that has partnered with the city on delivering Fiber to Housing. “Public, open fiber is the name of the game to truly change what’s possible in terms of quality of access throughout the city, throughout the country — throughout the world, really.” 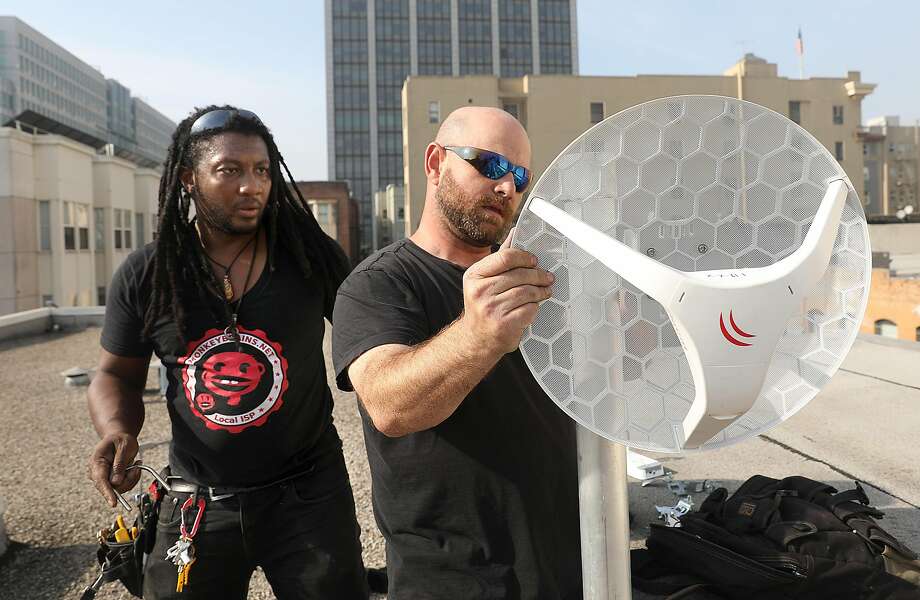 Although Comcast, AT&T and Sonic install and manage their own proprietary wires, a fourth network of city-owned fiber lines would constitute a permanent public asset in the effort to bridge the digital divide, Rhea said.

He referenced a new report from the Open Technology Institute, a think tank in Washington, D.C., ranking the top 10 cities in the world on affordable internet. The only U.S. city on the list is Ammon, Idaho, a small suburb of Idaho Falls with an ubiquitous, open fiber network. Private ISPs there piggyback on public infrastructure, driving down the cost to consumers while offering more variety.

San Francisco, if it were to invest in such a broadband network, could provide top-notch internet to every resident for decades to come. “Ultimately, this means the cost of providing internet — if it goes in the direction I believe it will go — will dramatically fall,” Rhea said.

Conversations about bridging the digital divide in San Francisco eventually circle back to the idea of creating a centralized wellspring of fast, cheap broadband along the lines of Farrell’s fiber proposal. There’s wide agreement that such a system would constitute a major asset to education, equity and democracy.

As the city works to connect more residents to its growing fiber broadband network, it is slowly stitching up the local digital divide. If one day, high-speed hookups truly become a universal feature of San Francisco, how would our lives tangibly improve?

We posed that question to city Department of Technology CIO and director Linda Gerull, who outlined some of the potential benefits and efficiencies city residents could enjoy with ubiquitous internet.

Healthier, cleaner communities: “Imagine a day when the internet of things extends to your garbage bin, so that sanitation crews know exactly where trash is piling up and can deploy resources accordingly. Or, as online shopping and home-delivery become the norm, the internet becomes a lifeline for poorer families to access affordable groceries, alleviating health issues associated with urban food deserts.”

Stronger democracy: Since shelter-in-place, Gerull says, San Francisco public meetings have been ported to video-casts and people have been logging on in droves to watch and participate in civic life. For example, the first Board of Supervisors meeting after lockdown drew more than 800 online viewers. Other meetings have seen viewership increase a hundredfold, according to Gerull. “Virtual meetings will be something that sticks around into the future.”

Yellow light: Logistically, laying fiber under the city is relatively simple. Politically, however, a proposal for a multibillion-dollar broadband project would inspire all kinds of pushback from entrenched private interests.

What remains controversial is whether committing billions of taxpayer dollars and a decade of construction time to such a massive infrastructure project would be a more effective means of serving needy residents than the tools that are currently available.

“If a city like San Francisco that has a lot of pre-existing infrastructure is trying to solve the problem of connecting low-income households despite there being several (ISP) options to connect to, then another layer of infrastructure isn’t the problem,” Jasper said.

Jasper would like to see federal subsidies for internet service and more education around the importance of having high-speed internet at home.

“This isn’t a regional issue,” Jasper added. “We should have a national solution to this problem.”

Gerull pointed out that even if Farrell’s project had won public approval in 2018, it wouldn’t have been ready in time to cushion the city’s vulnerable residents against the coronavirus pandemic.

“Waiting for new technology advances would certainly make it more possible to have a citywide fiber infrastructure,” Gerull said. “But our affordable housing and underserved housing populations can’t wait.”

Farrell chooses to look at the issue in reverse: The crisis proves that there is no time to waste.

“Think of what a different spot we would be in right now if there was ubiquitous fiber access at every home during COVID,” he said. “The incremental steps — the Fiber to Housing programs — those are all great. They’re awesome.

“But ask yourself, is what is happening today working to solve the bigger problem?” he added. “Does it work for people in San Francisco right now? I guarantee you the answer is no — not for everyone.”