Almost none of the students at W. W. Samuell High School had access to district-issued laptops or internet hotspots in their homes just one year ago.

In what would now be viewed as a prescient decision, Principal Jennifer Tecklenburg started handing out Chromebooks to students in December so that every student could have a device to take home.

“It was an equity issue,” she said. “The students needed the technology at home as much as they needed it at school.”

Most of Samuell’s students had a device when the pandemic forced campuses in Dallas and across the country to close last March. But there was still the glaring issue of internet connectivity – what good was a laptop if a student didn’t have a Wi-Fi connection to use it on?

Students completed work on their phones, submitted assignments via text message or parked outside of libraries and restaurants to access a signal.

DISD is building its own cell towers to boost campus Wi-Fi signals into nearby neighborhoods. Administrators hope the ambitious plan will connect families in the district’s neediest areas.

The pandemic forced school systems across the country to meet the 21st century need for secure and stable internet access. Without it, learning could be disrupted and students could fall behind their more connected peers.

The district looked at the issue both in the short- and long-term, recognizing that internet access was an immediate need. But it would remain a need post-pandemic with students still relying on the internet to complete schoolwork off campus. Fixing the digital divide for the future would require more resources and investment. 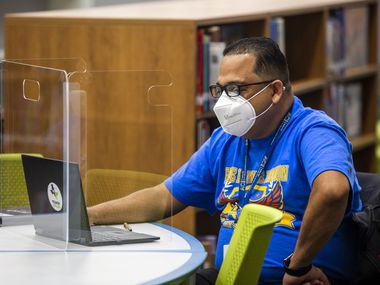 Hotspots worked as a temporary fix, but the internet quality wasn’t the same everywhere and siblings often had to share one hotspot, leading to what was sometimes a poor connection.

“Some folks can have a really great experience with their mobile hotspot where it performs well, and they get all the data that they need,” Kelanic said. “We are starting to hear some mixed results from families that are saying, ‘You know the signal isn’t great in my neighborhood, what other solutions do you have?’”

Dallas ISD plans to spend $4.5 million building cell towers in five neighborhoods where the digital divide is especially prominent. The towers would essentially boost the school’s Wi-Fi networks into the homes of families living within a 2-mile radius.

DISD’s board gave administrators the go ahead to construct the towers at a November meeting. DISD hopes to get the services operational in the first few months of 2021, Kelanic said.

Depending on the success of the towers in the first five neighborhoods, DISD could scale out the project to more communities. The private cellular networks are a longer term fix because it allows DISD to own the equipment. Plus, the district can potentially earn money by leasing space on the towers to other commercial providers.

“This is kind of owning versus renting,” Kelanic said. “The hotspots are great except that it is a year-to-year subscription, and we have to pay for that every year. And who knows? Maybe those costs will increase over time.”

DISD wants to use a mix of state and local funds to cover the costs of internet subscriptions for families for the next two years. 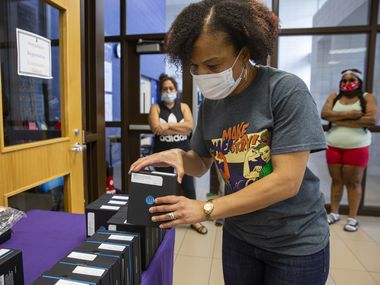 Families would be eligible for the help if they are considered economically disadvantaged, have students enrolled in DISD, live in a household with no existing internet subscription, and live within a service area of one of the approved providers.

About 86% of Dallas ISD’s students come from low-income families, although some of those may already have an internet contract. DISD officials are in the process of reaching out to families and hope to get eligible homes connected by Dec. 31, Kelanic said.

The cost will depend on how many families sign up and the rate that DISD and the Texas Education Agency can secure in negotiations with internet providers.

DISD had to navigate around state laws that govern who can be an internet provider, Kelanic said. Texas law bans municipalities from offering internet service to residents.

But DISD is essentially footing the bill for internet plans already offered and extending the service area of their own Wi-Fi networks, not launching a municipal broadband company, Kelanic said.

For Tecklenburg at Samuell, the ultimate goal is for every student to get reliable access to the internet. It isn’t enough to have students logging online wherever they can muster up enough of a signal.

“If they’re sitting in the backseat of a car in a parking lot somewhere, that’s not an equitable experience for them,” Tecklenburg said. “There’s no way to complete the work at the quality they need to on a regular continuing basis.”

The DMN Education Lab deepens the coverage and conversation about urgent education issues critical to the future of North Texas.