Home
Internet
Duck Runs A Marathon In New York And Gets An Award, Internet Overwhelmed 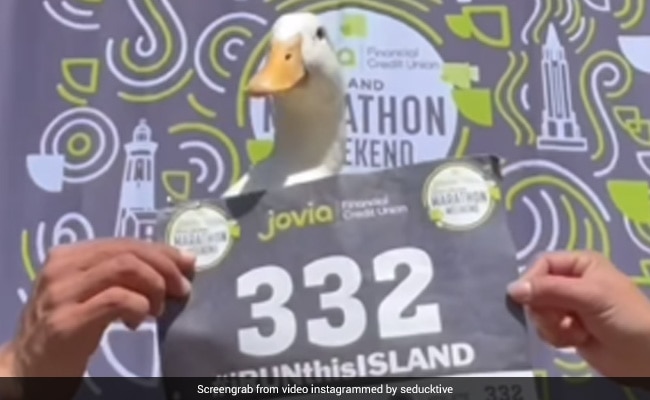 A duck running in a Marathon with other people, finishing the race and getting a medal.

A video is going viral on social media which shows a duck  running in a Marathon with other people, finishing the race and getting a medal.

This video has been shared by Seducktive on Instagram. According to the Instagram page, the duck’s name is Wrinkle and the page is managed by it’s owner.

“Wrinkle Finished a Marathon. Thanks so much to @limarathon for having Wrinkle as a special guest to run in the Long Island Marathon Weekend,” the post said. According to Canadian magazine Running, Wrinkle created a world duck record of 18 minutes and eight seconds in the Kids 1K Marathon.

The video was shared on Instagram almost a week ago and since then it has received over 38,000 likes and over 4.8 Lakh views on Instagram.

“You are truly amazing Wrinkle so much love for you,” a user commented.

“This is literally the cutest thing ever! His sprint finish,” commented a second one.

The duck can be seen jogging alongside its owner in the video, and she guides the way forward. Wrinkle also receives some beverage after the race is finished.

Also Read | Dead Shark Found Hanging Outside US School, Student Claims It Was A Prank

“Wrinkle you put a smile on my face every day thank you. You are awesome and well done running the marathon with your lovely assistant,” a third user wrote.

This cute duck was also seen running in a New York Marathon in November 2021. Since then, Wrinkle has become a regular in marathon events, and hangs out with other ducks at the local park.