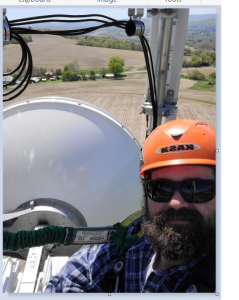 TREVORTON – The newly launched five-county broadband network to provide more high speed internet will soon be doubling its capacity thanks to some help from Sunbury Broadcasting Corporation. Crews from ConnxxNE, INC. are completing a new microwave link at our radio station’s Trevorton tower site, this will allow the network’s capacity to double.

ConnxxNE, INC’s Alan Wright says this new microwave link is the other half of the link that was installed in Mayberry Township, Montour County. The equipment for the network is owned by DRIVE, the Valley’s regional economic development entity, which announced the launch of the project in January.

Wright says the company was scheduled to install the new link at the end of this year, but are doing it now based on need, as the new network has triggered a ‘massive response’ from local residents and businesses.