No one sees the world as optimistically as children do – and sometimes we can all benefit from a change of perspective. One mum has provided that opportunity with a Twitter thread of her son’s adorable list of daily affirmations.

US mum Gwenyth Todebush said she told her five-year-old son Clark that she was nervous for a meeting she had later in the day, But Clark was able to come to the rescue with some sage advice.

“He said, ‘Mama, I am nervous all the time. I know what to do.’ So friends, here is all the advice he could fit into the drive to school,” his mum shared on Twitter.

1. ‘You gotta say your affirmations in your mouth and your heart. You say, ‘I am brave of this meeting!’ , ‘I am loved!’, ‘I smell good!’ And you can say five or three or ten until you know it.’

2. ‘You gotta walk big. You gotta mean it. Like Dolly on a dinosaur. Because you got it.’

4. ‘Think about the donuts of your day! Even if you cry a little, you can think about potato chips!’

5. ‘You gotta take a deep breath and you gotta do it again.’

Extra addition from this afternoon: ‘Don’t get distracted and your feet will stay on the sidewalk and not too full of snow.'”

READ MORE: I have one of the ‘weirdest baby names in history’ – and I love it

“So many gems in this thread,” said one commenter.

“This is wonderful. You are doing a great job with your little guy. Kids are sponges who soak up whatever we teach them and you’re teaching the right stuff,” added another.

“Your son is amazing and clearly you are an excellent mom! Good on you for teaching him skills that he’ll use for the rest of his life,” another said.

In an interview with CNN, Gwenyth was able to translate some of her son’s “Clark-isms”.

When saying “Think about the donuts of your day,” his mum says that “He loves the Burl Ives song, ‘The Donut Song’ and he found this little record in a dollar record section of our little record shop a few years ago. The song says watch the donut, not the hole. So you think about what you have, not about what you lack. And so for him think about the donuts of your day is something he says a lot.”

The statement, “You gotta walk big. You gotta mean it. Like Dolly on a dinosaur. Because you got it,” is inspired by none other than Dolly Parton.

“He loves Dolly Parton more than me probably,” says Gwenyth, “We talk about ‘Coat of Many Colors’ and how Dolly had some kids that weren’t very nice to her. And if she can do it, you can do it. I have no idea where the dinosaur came from, but he’s just very pro dinosaur.”

Perhaps the most relatable Clark-ism to adults is, “‘I am brave of this meeting! I am loved! I smell good!'” His mum says she “loves the grammatical construction of brave in this, because if you can be scared of something you can be brave about something. So I was like, yeah, I’m nervous about the meeting. Like, you gotta say that you are brave of this meeting. I don’t really know where I smell good came from but I use it all the time now.”

And lastly, Clark suggests to “say your affirmations in your mouth and your heart.”

“Sometimes, I’ll be like take a deep breath and he’ll do this one kind of halfhearted one and I’m like, no, you gotta do it again. You gotta give me more than that,” explains Gwenyth.

This ritual of theirs started once Clark was made to transition to in-person school after many months of staying home because of the pandemic.

“I would start with trying to have him look forward and say what are things that he is looking forward to so he could think about the future in a positive way rather than dread,” says Gwenyth.

“Apparently more of it was sticking than I thought.”

For a daily dose of 9Honey, subscribe to our newsletter here. 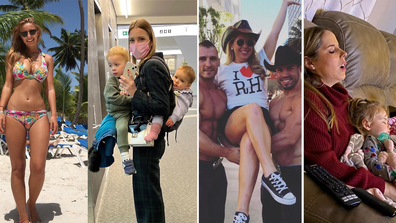