Sadly, there are cases of people who fall from grace to grass, they move from an enviable status to a lower rank and this is the situation of Mr Spellz.

Mr Spellz achieved internet fame which somewhat turned him to a celebrity after videos of him spelling words in a funny way went viral.

DJs and producers made music as well beats from his funny pronunciation. At some point, he appeared at shows with popular Nigerian celebrities and raked in cool cash but all that seems to be a thing of the past now.

In a sad video shared on TikTok by @sgkkbaby, Spellz was spotted seeking alms at the Abia mall.

He looked unkempt and malnourished and was ignored by people he approached for help.

No one seemed to even care for a selfie or identify with him like people did at the peak of his popularity.

“The question is,is he ready to help himself?people have tried to help him several times but I hear he’s an alcoholic.I heard Flavor even gave money for rehabilitation and he refused to go.you can take a horse to the stream but you cannot force it to drink water.”

“I blame him previous manager!!! When baba begin make money, instead of him to carry am go rehab, e begin carry women give am, now baba don go back to him vomit.” 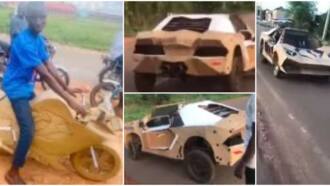 “Omo we can’t blame anyone cus there are many more like him out there Abi weytin make mr spells different?”

“He’s a drunk ..they’ve tried so many times to revive him but they have already eaten him from village.”

Nigerian man captures the attention of Snoop Dogg with his hairdo

The Nigerian who has been dubbed Post Am had become an internet sensation after he was spotted on the streets with his uncommon hairdo, with various local media outlets sharing a video of him showing off the haircut.

Reacting to the hairdo, Snoop Dogg reposted the video on Instagram to his 73 million followers with the caption: