You are here: Home / Internet / Girls Who Code Breaks The Internet 12/09/2020 – MediaPost Communications 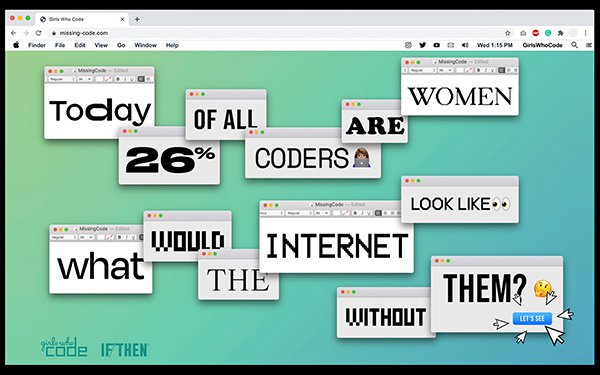 Non-profit Girls Who Code is playing off the pop culture
slang “breaking the internet” to celebrate the unseen contributions of female coders. This project was financially supported by Lyda Hill Philanthropies’ If/Then initiative and
created in partnership with a women-led team at independent agency Mojo Supermarket.

The “Missing Code” campaign introduces a dystopian world with a broken, glitchy internet
because it doesn’t include the contributions of women coders. The ultimate goal is to get young women to see other role models in the coding and computer industry and consider it as a career
choice.

“We needed something that grabs attention and changes the way people see this industry,” explained Mo Said, founder and Chief Creative Officer, Mojo Supermarket.
“Everyone thinks of coders as nerdy guys in loose fitting hoodies. We wanted to engage teens and actually change that perception. How do you show that the internet needs women coders? By showing
just how much it would suck without them.”

The one-minute film is paired with an interactive portal where visitors can surf an alternate internet missing the code written by women. The
portal features mocked up homepages of top platforms — including Teen Vogue, Sephora, and Adidas — that have been reprogrammed to show just how crucial women are to the industry. These
featured brands are partners. The Mojo Supermarket and Girls Who Code teams worked “tirelessly” to get the consent and involvement of big brands and platforms to show the impact of women
in tech.

The campaign debuts to coincide with Computer Science Education Week, and will run throughout the week on Girls Who Code social media channels and www.missing-code.com. The film
itself is also designed to drive traffic to the portal, with additional support coming from partners that are involved in the site to push out the portal experience through their social media
footprint.