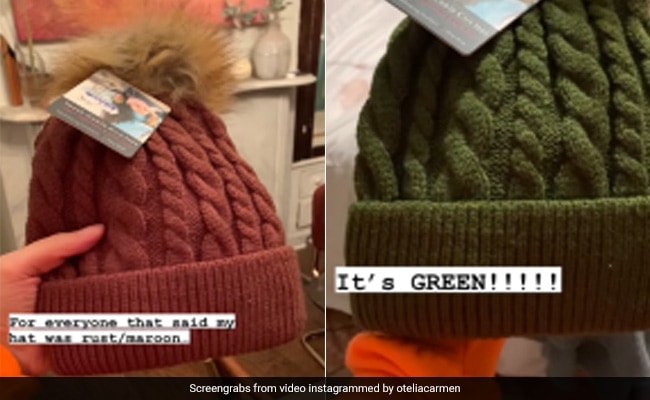 It’s ‘The Dress’ all over again – only this time, it’s not actually a dress but a woollen hat that has baffled the Internet. In 2015, a picture of a dress broke the Internet, with people across the world failing to reach a consensus on what colour it was. While some saw the dress and blue and black, others were convinced it was white and gold. More than half a decade later, social media is facing a similar conundrum once again.

Tiktok user Otelia Carmen recently shared a video of a hat that seems to change colours, going from maroon to brown to green in a matter of seconds. According to Ladbible, she shared a video of the colour-changing accessory on TikTok, where it has been viewed over 6 million times.

Ms Carmen said she bought what she thought was a green hat, only to discover that it looked reddish-brown when she got home. She said: “So, I bought this green hat at the store today and I brought it home and when I took it out, I was like: ‘Why is this brown?'”

She posted a video on Instagram too, which shows the hat changing colours as Ms Carmen moved from one room to the other. “For everyone in my stories who said my hat was rust/maroon…you’re right – and also wrong,” she captioned the clip.

“This is insane,” wrote one person in the comments section. “I’m confused and entertained at the same time,” another said, while a third remarked: “This is like the next blue vs black dress.”

According to The Sun, Ms Carmen said the apparent colour change was caused because of metamerism.

Metamerism is a term used to describe how the colour of an item appears to change under different lighting. It happens because each light source has its own “colour”. When the light is projected onto a coloured object, it impacts the colour of that object.

In this case, Ms Carmen’s hat appeared green in the shop, but the lighting in her house made it look more rust-coloured.