Kamala Harris repeated four times in the matter of less than 30 seconds the ‘significance of the passage of time’ during remarks after an event in Louisiana Monday on providing high-speed Internet to smaller towns in America.

In what appeared to be an off-script opening to her speech, the vice president said: ‘The Governor and I and we were all doing a tour of the library here and talking about the significance of the passage of time. Right?’

‘The significance of the passage of time,’ she repeated.

She went on: ‘And there is such great significance to the passage of time when we think about a day in the life of our children and what that means to the future of our nation, depending on whether or not they have the resources they need to achieve their God-given talent.’

Republican Georgia Representative Austin Scott re-posted a clip of the comments on Twitter and pointed to the vice president’s other failures in adequately addressing the southern border crisis.

‘Biden really should get her permission to put someone else in charge of border security,’ he tweeted. ‘There has been too much passage of time with nothing being done.’ 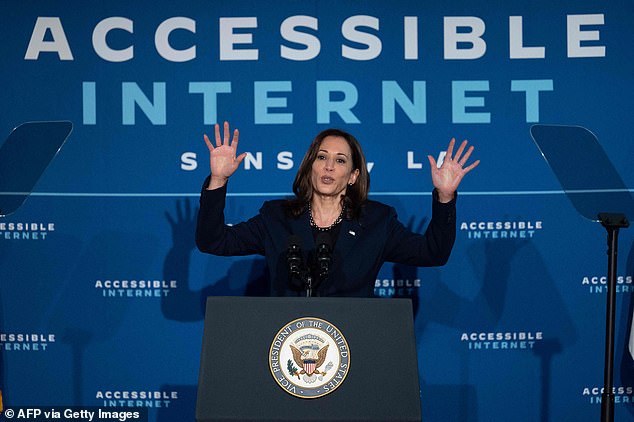 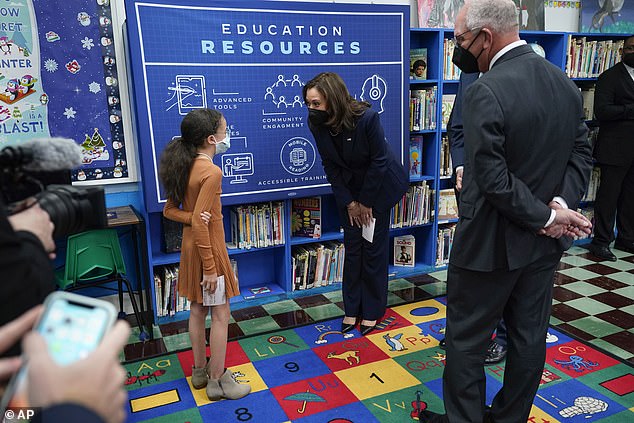 Before the remarks, Harris spoke with a student at the Armand J. Brinkhaus Community Library in Sunset, Louisiana on Monday, March 21, 2022 with Democratic Governor Jon Bel Edwards standing to the right

Veteran Republican aide Matt Whitlock compared the moment to the sitcom VEEP, tweeting on Monday: ‘Kamala Harris on the ‘significance of the passage of time’ is the most VEEP thing we’ve seen in at least a few weeks.’

‘The passage of time is what is killing the lower/middle class and our children. What does this even mean,’ one Twitter user, sports radio personality Jordan DeArmon, tweeted.

Harris was introduced by Louisiana’s Democratic Governor John Bel Edwards in the early afternoon on Monday to speak to about 100 people. She was also introduced by a Louisiana student named Josi who said poor internet connectivity made virtual learning during the pandemic ‘ten times more difficult.’

‘Josi, thank you for that introduction,’ Harris said. ‘She and I were speaking backstage. I have to tell you, I just love it when we see and have our young leaders participate, because they are what it’s all about. And I see many of our young leaders in the room today. So this is a good day, and I do know that our future is bright when I see this incredible talent.’

The vice president went to Sunset, Louisiana on Monday where she spoke to community leaders and students and made remarks at a community center to promote the administration’s efforts to expand broadband internet access across the country.

Her confusing and repeated reference to time passing by comes as the vice president continues to face criticism for her public appearances, including her inappropriately timed laughter and her demeanor.

On Monday, Harris spoke for about 16 minutes. In the first part of her remarks she appeared to go off-script and in the matter of 28 seconds she said ‘significance of the passage of time’ four times in a row. 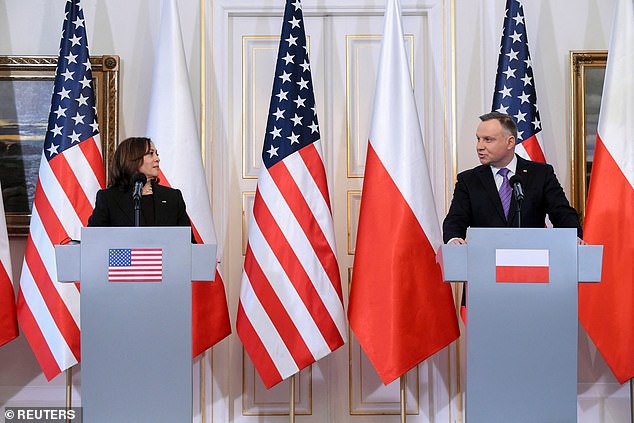 When asked earlier this month about the building refugee crisis in Poland, Harris laughed and handed the question off to Duda, saying through chuckles: ‘A friend in need is a friend indeed’

Earlier this month, Harris visited Poland and faced criticism for her laughter in the midst of a serious war unfolding and refugee crisis from Russia attacking Ukraine.

Harris laughed off questions about the refugee crisis and dodged inquiries at a press conference in Warsaw on Thursday, March 10 regarding why a deal for sending fighter jets to Kyiv fell through.

Ukrainian-born Republican Representative Victoria Spartz slammed the vice president by saying ‘this is a very serious situation requiring action, not a laughing matter,’ as critics tore into Harris’ conduct at her press conference alongside Polish President Andrzej Duda.

The vice president’s three-day trip to Eastern Europe comes as Poland has taken in upwards of 2 million refugees fleeing Ukraine in the more than three weeks since Russian President Vladimir Putin invaded.

When asked about the issue of refugees, Harris looked at Duda like she expected him to respond first, then cackled through her comment: ‘A friend in need is a friend indeed.’

‘Kamala Harris has been very consistent during her live remarks with Poland’s leader,’ former Donald Trump campaign aide George Papadopoulos tweeted at the time. ‘She is awkwardly laughing. Again. Discussing refugees is no laughing matter. Why she laughs at this is deranged.’

Turning Point USA’s chief creative officer Benny Johnson posted: ‘Only Kamala Harris would find it appropriate to laugh when talking about the topic of Ukrainian Refugees.’