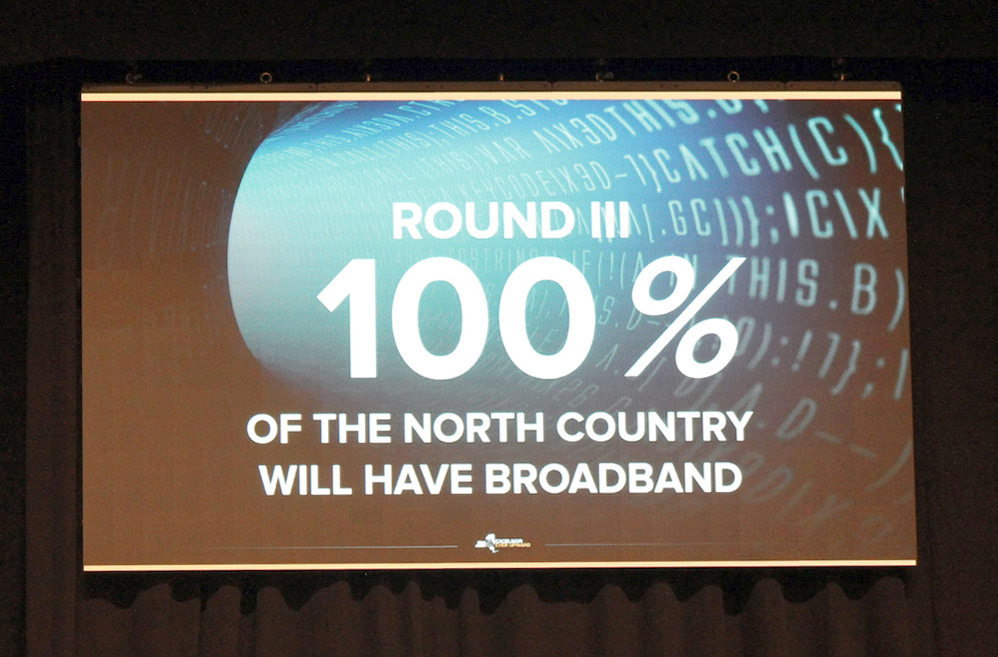 A slide from former Governor Andrew Cuomo’s presentation at Clinton Community College in 2018. New York has been promising universal broadband for years, but has yet to deliver. Photo: Zach Hirsch

At the end of 2021, Governor Kathy Hochul signed a new law that reduces the per-mile costs of installing high-speed internet lines in underserved, rural places like the North Country.

Assemblyman Matt Simpson on goals for broadband in 2022

To see what’s next in 2022 for high-speed internet access, David Sommerstein spoke with Republican Assemblyman Matt Simpson, who says that new law is a “great first step” to make it cheaper for internet providers to run the cable on utility poles across the region. Their conversation has been lightly edited for clarity.

ASSEMBLYMAN MATT SIMPSON: There’s a negotiation that goes on between the pole owner and the provider. A lot of those costs to accomplish that attachment are borne by the [internet service] provider, such as increasing the height of the pole and maintenance. And in my opinion, I think that those were unfair costs. That added to the overall costs for expanding broadband.

DAVID SOMMERSTEIN: It was an obstacle for getting broadband in more places around the North Country that are currently not served. So that was one victory. What other obstacles are there that the state needs to take on this year?

So this is just another burden, another cost, another issue that we need to resolve, especially when all the taxpayers of New York State are contributing to the build-out of broadband to reach all of our communities, all New Yorkers. Governor Cuomo, prior to Governor Hochul, had appropriated $500 million in his budgets towards build-out and we need to stretch those dollars as far as we can.

SIMPSON: We don’t. There’s still a survey being conducted by the state to assess who has it and who doesn’t, and what speeds they’re capable of experiencing at their location.

There were issues with the federal census maps that were being used to identify who is being served and who isn’t. If one location in those federal census blocks said that they had high-speed broadband, that would show that everybody in that census block has access. And of course, we know that’s not true.

SOMMERSTEIN: Why, in your opinion, is this so important?

SIMPSON: You know, it was important to me personally, even before. At this stage of my life, I had children that required use of computers in the home, multiple computers. I live in a rural community, so some of my neighbors do not have access on the same road that I live on.

But I think, since the onset of the pandemic, it just really highlighted the need and the importance, that this is critical infrastructure for all New Yorkers, that this is very important critical infrastructure to public safety, education, and now with telemedicine, which brings an opportunity, especially in rural New York, to satisfy our basic health needs by connecting on broadband.