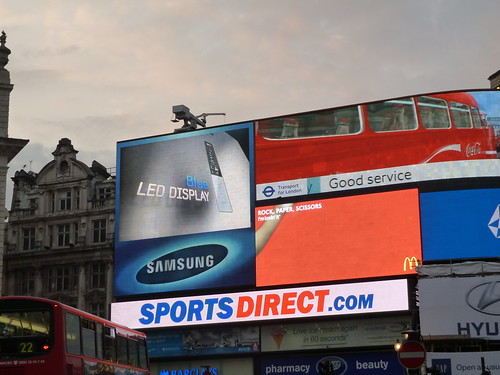 Also featured: 3-DIMENSIONAL TELEVISION, cameras that RECOGNISE YOUR FACE and frickin’ ROBOTS WHICH CLEAN YOUR HOUSE.

And so I am standing in Piccadilly Circus listening to William Gibson talk about how he took a walkman full of music onto the streets in order to define his own reality and saw an Apple II and knew that this tool would allow us all to do the same, forever, like the kids playing Space Invaders living inside the screens, in what he called NOTIONAL SPACE.

And I’ve just come from the ICA, where I’d been listening to OWEN HATHERLEY and PATRICK KEILLER talk about housing—the same ICA which was founded in 1946 as a playground for artists and scientists, where Pop Art was born, which held the Cybernetic Serendipity exhibition and the world’s first cybercafé and which the goddamn HISTORY CHANNEL decides to note as the London debut of Franz Ferdinand—where Hatherley and Keiller laid the failure of housing—in general, not just social housing—squarely at the feet of capitalism, which demands we do more with less, that puts price above all other considerations, and that is why we all still live in Victorian hutches rather than cities in the sky. Because buildings are still one-off products—massively expensive compared to all other goods—local, fixed and immobile. In short, YOU CANNOT DIGITISE A HOUSE.

"We have a right to ask ‘why’ housing should be as cheap as possible and not, for example, rather expensive, ‘why’ instead of making every effort to reduce it to minimum levels of surface, of thickness, of materials, we should not try to make it spacious, protected, isolated, comfortable, well-equipped, rich in opportunities for privacy, communication, exchange of personal creativity."
Giancarlo di Carlo, ‘Legitimizing Architecture’, Forum Vol.23 1972 — THAT.

And down the road, on the Mall itself, the BRITISH COUNCIL have put up an honest-to-god STATUE OF YURI GAGARIN, unveiled in front of 500 Russians in the SAME GODDAMN WEEK that we all but said fuck that to manned spaceflight.

And my friend Dean is telling me that it’s obvious that the problem is that we can’t see past this profit motive, that we’ve got our priorities wrong and I’m all like DUH WTF CAPITALIST REALISM but he is not wrong and in the lecture H & K talked about the Nairn-Anderson thesis that Britain is essentially fucked because it never had a proper revolution, which may or may not be the case, but stuck with me because this weekend I remembered that in 1989 my parents had a Thatcherite Bastille Day garden party for the bicentennary with cockade hats and everything and how fucked up is that? Well, about as fucked up as the mental Tory small-p party currently going on at the South Bank with the whole Festival of Britain thing but that is ANOTHER MATTER.

But the thing is we are all fucked up because we have put THE FUTURE into white goods, that are only allowed to be MAGIC as long as they’re also SHINY, instead of, you know, into HOUSING and JUSTICE, and do you really expect us to believe that we can’t go to the moon when we seem perfectly capable of building autonomous robots that bomb the shit out of poor people?

But I am also hopeful because the only answer to injustice is organisation—ORGANISE, ORGANISE–and if we can stop moaning long enough then maybe the internet will save us because THAT IS WHAT IT IS FOR. Maybe, just maybe, I don’t know, NETWORK BEATS HIERARCHY but what I do know is that notional space is real, that WE ARE 6 BILLION PEOPLE WITH NO HEADS and we are only just beginning to figure this shit out.

BENEATH THE PAVING STONES, THE BEACH.

BENEATH THE BEACH, THE FUTURE.