You are here: Home / Internet / Images / Internet Map of the Middle East 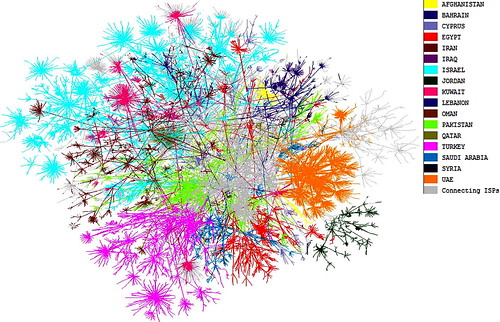 Here we see the proximity of Internet backbone router connections, a network topology instead of geography. From this perspective, the world is not merely flat, but deeply interconnected.

Some of the grey routers are outside the region. For example, the router that passes the most traffic in the Iranian .ir domain is actually located in Russia. Much of Iran’s infrastructure is outsourced. Iran blocks 10% of U.S.-based IP traffic (compared to Cuba at 50%).

Lumeta has been mapping the Internet for 10 years, as Information Week reported today. (full disclosure: we invested in them when they spun out of Bell Labs)

I have a several of their earliest maps in the office from the first, published in WIRED in 1998, to others a few years later.

How this was made: At Bell Labs, Ches modified a hacker trick and sent a storm of IP packets out randomly across the network. Each packet was programmed to self-destruct after a delay, and when this happens, the packet failure notice reports back the path the packet took before it died. To visualize this sea of data, Ches applied place & route software from the semiconductor CAD industry to untangle the hairball of links and spread them out in a 2D map that humans can easily absorb. When this is done from within a corporate network, Lumeta can find security gaps and unknown network connections.

This technique can also see the network “lights go out” during wartime bombing raids. in the Yugoslavian bombing a few years back, only the out-of country routers stayed active throughout.