You are here: Home / Internet / Images / The Trusted Internet Directory 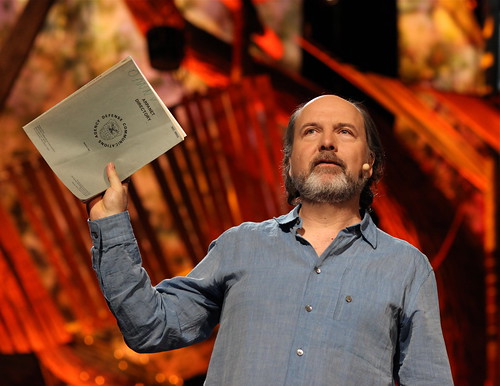 Danny Hillis was the third person to register a domain name. He could have registered as many as he wanted, when only two were taken, but “that wouldn’t have been very nice.”

He is holding up his Internet Directory. It’s like the White Pages for those who remember such things. It’s a list of everyone on the Internet. Everyone. It lists their name, physical address, email address and phone number.

It’s not a very thick book, and the alpha sort is just the first half; the second half of the book is the same information sorted by email. Ah, the pre-search engine era. 1982.

“There were only two other Dannys on the Internet then. I knew them both. There was a level of trust that permeated the Internet.” And that trust is built into the protocol of the network.

“There has ben surprisingly little attention to defending the Internet itself.”

The Internet is vulnerable to the sys admin layer, which presumed trust, not the network layer, which was meant to survive nuclear attack or massive outages at the link layer.

It’s like the financial system; no one understands the emergent properties. The communications links used to be heterogeneous; they couldn’t all break at once. Now TCP/IP is taking over everything. When the U.S. drone made a smooth landing on the Iranian airstrip for capture, it was merely a counterpoint to our worm that destroyed the Iranian uranium enrichment centrifuges. If the Internet went down, the President could do only one thing – launch a nuclear war. Ironically, that is the one network that is completely independent of the Internet. He could not call the Kremlin or order a pizza.

When we heard this at the TED retreat, we suspected others would want to hear this too.