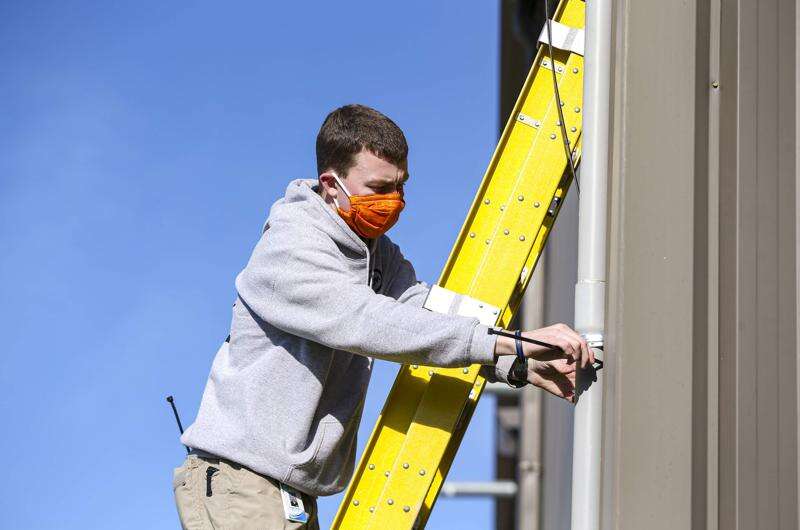 ImOn installer Logan Graham works on running wires up the exterior of the building at Evans ATA Black Belt Academy in Cedar Rapids this past April. (The Gazette)

IOWA CITY — ImOn Communications said it has completed the first phase of a three-year expansion plan by adding 3,200 residential addresses to its Iowa City fiber network.

“The completion of phase one demonstrates to us that we are well equipped to meet the needs of Iowa City and Coralville within the next 12 months,” ImOn CEO Patrice Carroll said in a statement.

“Adding 3,200 addresses to the network in such a short time is a great start in fulfilling our commitment to building out all ImOn’s existing markets in the next three years.”

Carroll told The Gazette last year the company is working to have the fiber network available to all residences and businesses in Iowa City by the end of 2022.

ImOn first announced its plans to expand into the Iowa City market in 2015 and began providing services in 2016 to businesses in the downtown area.

Its residential service began in Iowa City in 2019.

ImOn also is working on expanding its fiber access to residences and businesses in Coralville. Carroll said “significant” progress will be made next year, with Coralville’s fiber network expected to be completed by mid- to late 2023.

“Our total investment in the next two years will be about $33 million, which is enabling us to move at a much faster rate than we ever have before,” Carroll has said about the expansion in Iowa City and Coralville.

The fiber network in Dubuque also is expected to expand in the coming years, with completion anticipated by the end of 2024, Carroll said.

An accelerated plan also is in place for Cedar Rapids, Marion and Hiawatha. Those areas are about 60 percent completed, Carroll said, and are anticipated to be finished by 2024.