By the end of the year, India was responsible for at least 106 such incidents, making it the worst offender on internet shutdowns for the fourth year in a row. India accounted for almost half (47%) of the 182 internet shutdowns worldwide in 2021.

Of the 106 shutdowns in India documented by AccessNow, 85 were in Jammu and Kashmir alone. The report noted that this was a region where authorities “continue to impose intentional internet disruptions that last for long periods, disrupting and endangering people’s lives for months on end”.

Incomplete picture: AccessNow said it was possible that it hadn’t documented every shutdown in India because of a lack of government transparency.

It said the government’s failure to create and maintain a database of shutdown orders across the country was a violation of the 2017 Suspension Rules and the Supreme Court order backing them.

Under the wrong spotlight: Internet shutdowns in India drew international attention and condemnation in 2021, the report said. The government cut internet access in a “clear attempt” to suppress the farmers’ protests, it said, and “plainly sought” to prevent protesters from communicating with one another and obstruct reporters.


Despite this, the government failed to conceal its violent crackdown, and world governments and international celebrities Greta Thunberg and Rihanna spoke out against the violence and disruptions, the report said.

Shame old story: AccessNow said the persistent use of internet shutdowns in India despite the global outcry and regulations requiring more transparency means the situation on the ground hasn’t improved much over the years.

Why it matters: Regardless of the context or rationale, the report noted, internet shutdowns are an attack on human rights.

The pandemic has highlighted the consequences of disconnecting people from the internet, which is now critical for access to everything from education, work and banking services to information, culture, entertainment, and basic daily communication.

“It is our hope this report serves as a warning: ignore internet shutdowns at your peril. They are never a sign of respect for human rights, a healthy democracy, or effective governance,” the report said.

Silver lining: In December 2021, India’s Parliamentary Standing Committee on Communications and Information Technology released a report highlighting the misuse of internet shutdowns, and their impact on rights and freedoms. It recommended that the government reform the framework governing the suspension of telecom and internet services.

While the report had many positive recommendations to increase transparency and accountability, and strengthen safeguards, the report noted it didn’t condemn the use of internet shutdowns.

Written by Zaheer Merchant in Mumbai.

Other Top Stories By Our Reporters

Elon Musk’s Twitter deal Musk bags Twitter for $44 billion, to cheers and fears of ‘free speech’ plan: Elon Musk clinched a deal to buy Twitter Inc for $44 billion cash in a transaction that will shift control of the social media platform populated by millions of users and global leaders to the world’s richest person. Musk has criticized Twitter’s moderation, calling himself a free speech absolutist. He said Twitter’s algorithm for prioritising tweets should be made public, and criticised the company for giving too much power on the service to corporations that advertise.

Twitter under Musk could have more trouble with Indian govt, experts say: Elon Musk’s $44-billion offer for Twitter may lead to more run-ins with the Indian government and others because of his ‘absolutist’ stance on free speech, experts said.

What’s new in ecommerce CCI raids top sellers of Amazon and other ecommerce firms: Officials from the Competition Commission of India (CCI) searched the offices of some of the country’s largest online sellers on Thursday, sources told us. These included Amazon-owned Cloudtail and Appario Retail, a joint venture entity between Amazon and the Patni group, they said. The officials also searched the offices of a few big sellers on Flipkart and social commerce major Meesho.

Amazon will absorb Cloudtail and Prione employees, says CEO of joint venture: Around 1,000-1,200 employees of Cloudtail and its parent firm Prione Business Services will be moved to Amazon, Prione CEO Pankaj Jathar told the company’s employees at a town hall meeting on April 12, a source told us.

FirstCry plans $1-billion IPO, may seek Sebi nod next month: FirstCry is planning to launch a $1 billion IPO in India and will file its draft papers next month, sources aware of the matter told us. The Pune-based etailer, backed by SoftBank and Premji Invest, was initially considering a $600-700 million IPO but has now decided to increase the offer size to as much as $1 billion.

EVs in the spotlight Govt asks EV makers for quality control details: After a meeting with EV makers on April 25, in light of the recent fire incidents, the government on Friday requested original equipment manufacturers (OEMs) to provide details of their quality control mechanisms. 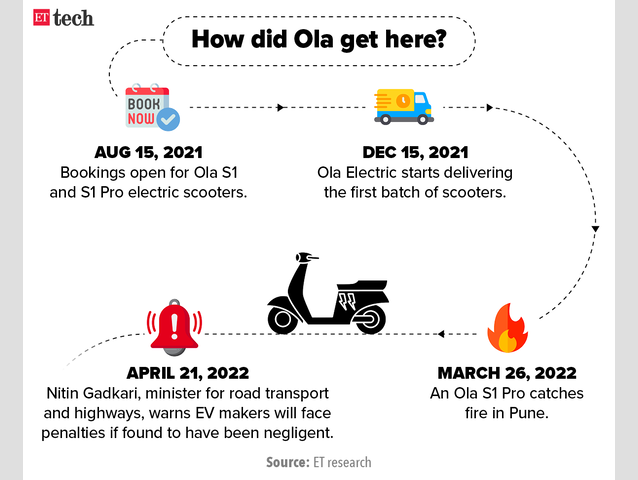 Startup layoffs, hirings
Layoffs kick in at startups as large funding rounds wane: Large funding rounds are few and far between these days, so startups are looking to cut costs by shedding staff. Over the past few weeks, more than 1,800 contractual and full-time employees have been fired from: edtech firm Unacademy, social commerce startups Meesho and Trell, online learning platform Lido Learning, and furniture rental startup Furlenco

EV makers offer huge pay hikes amid talent crunch: Rapid growth in India’s electric vehicle industry is driving up salaries in this sunrise sector as companies are finding it hard to get the right talent. At the top, senior executives are often getting a 50% or higher jump in salary, while at the mid-level the increase is almost 100%, experts said.

From the cryptoverse Top banks ask NPCI to clarify its stance on UPI for crypto: Leading banks have started to question India’s ‘shadow ban’ on cryptocurrencies. Many top lenders have asked the National Payments Corporation of India (NPCI), which runs the Unified Payment Interface (UPI), to issue a formal directive about any curbs on its use in buying and selling crypto.

IT corner IT firms likely to hand out 8-10% wage hikes this fiscal: Indian IT companies are likely to raise annual wages by 8-10% for local employees this fiscal year as the industry copes with an unprecedented talent crunch and 17-28% attrition rates at companies such as TCS and Infosys. That compares with a salary increase of 10-12% last year, but it’s still among the highest in recent times.

Indian IT firms and startups snap up displaced Ukrainian engineers: India’s largest information technology companies – Tata Consultancy Services (TCS), Infosys and HCL Technologies – as well as gaming startups and mid-tier software-as-a-service (SaaS) firms are hiring engineers who have been displaced by the war in Ukraine and are seeking shelter in European cities.

■ Venturi Partners, a consumer sector-focused fund that aims to invest in India and Southeast Asia, has raised $175 million towards the final close of its maiden fund, a top executive told ET.

■ Global ecommerce software platform Assembly on Monday said it has acquired Chennai-based PipeCandy, making it the first Indian vertical data-as-a-service (DaaS) company to be acquired by a US entity. Financial details of the deal were not disclosed.

■ Debt marketplace CredAvenue has acquired a majority stake in Corpository, a software-as-a-service (SaaS)-based credit underwriting company at a valuation of Rs 100 crore through a combination of primary investment and secondary purchase from existing shareholders.

■ DeHaat, a full stack agri-tech platform, has acquired a majority stake in Y-Cook India in an all-cash deal. Y-Cook India is backed by investors such as Omnivore Partners, OkCredit and 021 capital, among others.

■ The Singapore government’s private equity fund Temasek will anchor the three alternative investment funds managed by the InfoEdge Group by bringing in 50% of the total corpus, with the rest being funded by the company.

Curated by Judy Franko in New Delhi. Graphics and illustrations by Rahul Awasthi.

That’s all from us this week. Stay safe.