Lake-goers gather around Chimney Rock on Lake Martin. The rock is covered in graffiti and is frequented by visitors who jump off its face into the water. 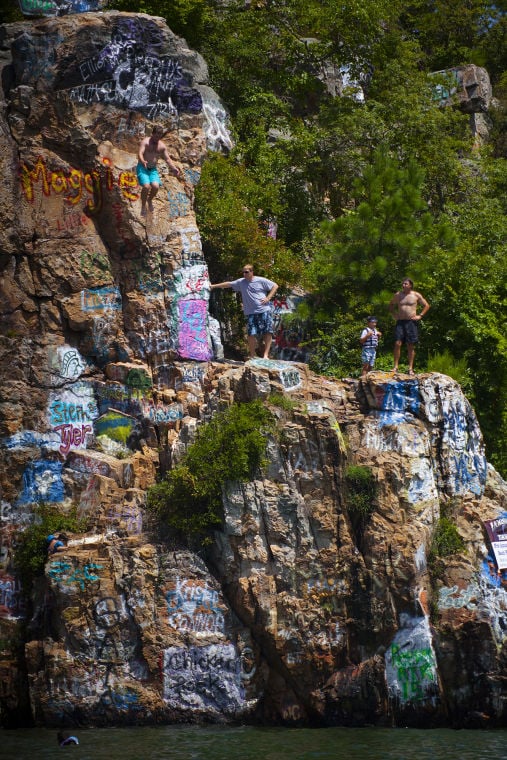 A swimmer jumps off of Chimney Rock at Lake Martin. 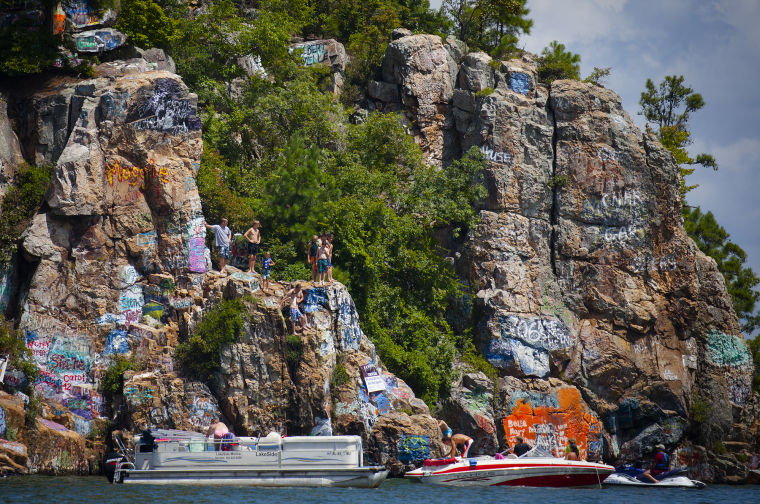 Lake-goers gather around Chimney Rock on Lake Martin. The rock is covered in graffiti and is frequented by visitors who jump off its face into the water.

An affluent neighborhood on Lake Martin frequented by many Lee County, Montgomery and Birmingham residents who have moved or bought second homes there is among the seven most recent projects announced by Gov. Kay Ivey as receiving grants intended to expand high-speed internet “in mainly unserved rural areas.”

Spectrum Southeast is the company that will receive $245,567 in grant money to help extend service availability to 316 households in Marina Marin, which is accessed from a county road that veers off of Alabama Highway 50 in southern Tallapoosa County.

Spectrum Southeast also will receive $8,407 to help provide high-speed cable access to eight households along Lee County Road 279 near the Halawaka community, another of the seven projects announced.

Ivey in the grant program has awarded about $18.5 million through such projects so far this year to expand high-speed internet access in rural areas struggling to find service, which often is considered too remote and cost-prohibitive by providers who don’t see a profit easily made.

The COVID-19 pandemic significantly has highlighted the state’s shortcomings, as more students and stay-at-home workers have turned to the internet to study and work remote. Vast stretches of Alabama are still without adequate access, state lawmakers have acknowledged.

The grants were awarded through the Alabama Broadband Accessibility Fund, which was created by the Alabama Legislature and signed into law by Ivey.

It was created to assist broadband providers in extending high-speed internet service for households, businesses and community anchors in unserved areas of the state or in areas lacking minimum threshold service. A community anchor is an establishment like a police or fire department, city hall, library, school or medical facility, according to a description from the governor’s office.

“The COVID-19 pandemic further emphasized how essential broadband services are to the unserved and underserved residents of Alabama,” Ivey said in a recent press statement. “Thanks to the Broadband Accessibility Fund and broadband providers, we are making progress in ensuring that Alabamians have access to high-speed internet services, but there is no question we have a long way to go on completing this mission.”

The Alabama Department of Economic and Community Affairs, directed by Kenneh Boswell, is administering the program.

“Having access to high-speed internet can make a huge difference in the lives of Alabamians in terms of doing business, obtaining an education and improving the overall quality of life,” Boswell said. “ADECA is pleased to be a part of this process that will change lives for the better.”

The other five projects recently approved include the following companies receiving grants to work in these counties:

Hayneville Fiber Transport Inc. (Camellia Communications) — $128,797 to provide service availability to 48 households and four community anchors in the Sherling Lake community, which is northwest of the city of Greenville.

Gigafy — $178,782 to provide access availability to 486 households and 38 businesses in the vicinity of the city of Heflin.

Cyber Broadband Inc. — $1.33 million to provide service availability to 1,600 households, 125 businesses and 50 community anchors in the vicinity of the Baileytown and Joppa communities in eastern Cullman County.

Spectrum Southeast — $55,481 to extend broadband service availability to 55 households in the Deerfield subdivision west of the city of Selma.

The department also reports that it is conducting a Broadband SpeedSurvey to help identify gaps in broadband coverage for the state’s planning efforts.

Alabamians can report their internet speed or lack of internet by taking the survey at https://alabama.speedsurvey.org.