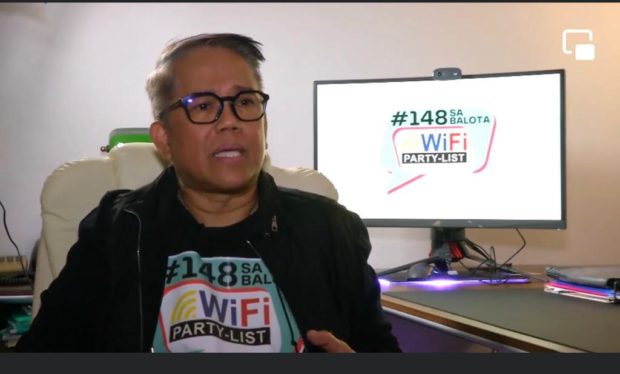 Reducing human contact in government lessens red tape and opportunities for corrupt practices since digital transactions limit personal discretion that is the root of most illegal dealings, the group stressed.

“Filipinos are penalized due to the piles of paperwork just to get a simple permit. It is tedious and frustrating especially when an applicant loses a document. It’s also an incentive for corruption to speed up the process,” the group’s first nominee lawyer Ted De Leon stressed.

While the broadband network to connect all government offices is being built, De Leon said WiFi Party-list will move for subsidies to marginal families for internet expenses to allow continued education of their children.

“Internet has become a basic commodity in this age of swift technological development coupled with episodes of contagion,” he said.

When the pandemic hit, De Leon said broadband technology spanning education, communications, health provision and entertainment became a necessity to put people at a safe distance from each other to prevent viral spread.

But the absence of a State-owned internet backbone connecting the entire country created a huge vacuum in services primarily for secure communications among agencies in responding to the health crisis and in conducting remote learning.

“It took the pandemic to stress the importance of internet connection. The country was caught flatfooted in implementing online learning with all the problems it entailed making this ineffective,” he stressed.

As such, WiFi Partylist said it will pursue the setting up of a national broadband system if it wins a seat in Congress.

The group said many years back, the national broadband project was scrapped not because of the concept behind it but due to issues of corruption.