You are here: Home / Internet / Internet in Bloom for The Layperson – Western Queens Gazette

Most of the US owns at least one mobile phone. In fact, the Pew Research Center at www.pewresearchcenter.org states that 96% of us own them. I could recommend that our readers avoid texting while driving or crossing a busy intersection. However, readers of Internet in Bloom for the Layperson may have noticed that among all the websites and URLs covered over the years, we have never reviewed apps. An app is just short for application, right? Maybe not. Consider a professional IT user site’s definition: www.webopedia.com.

“Short for application, the commonly used abbreviated form (‘app’) refers to a specific type of application that is designed for a single purpose. An app has a single functionality whereas an application may handle a number of functions. The phrase app is commonly used in reference to downloading or using mobile applications on smartphones or tablets and application is used more often to reference desktop applications, however, the delivery method does not define app versus application.  This happens simply because single purpose apps are more common on mobile platforms, where applications with multiple functionality is usually delivered through desktops. While not as common, apps can be delivered on the desktop and applications do run on mobile devices. A killer app is a new media buzzword used to describe an app that is very good and surpasses (i.e., kills) its competitors.”

Compare that to www.Google.com‘s definition. When using the ubiquitous search engine, all one has to do is type the word “define” before the word or term you seek and you get a layperson’s definition, good enough for average use. For example:

“COMPUTING 1. an application, especially as downloaded by a user to a mobile device.

“I’ve just installed the app on my phone”

Moreover, as you may have guessed, we are going to start reviewing apps for numerous reasons, such as, without the invention and widespread adaptation of the Internet we would not be downloading and applying apps the high-tech way they are used today. Think back, if you are old enough or you can ask an old-timer like myself, to life before the Internet, aka DARPNET pre-1968… No cloud. No cellphones. No social media. No apps. No fun. No kidding. Vigilance! 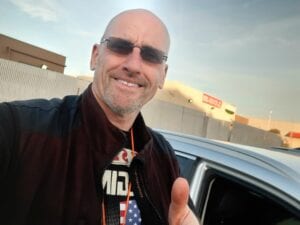 Ted Bloom, MLS., MSEd., CPL.,CKMI., has been a published columnist in New York since 1999. A CDCR law librarian and instructor with two graduate degrees, some of his credentials include, creating and running a career preparation computer lab for at-risk youth through the U.S. Department of Labor, a SUNY Communications Instructor, a YMCA Director and a Certified Krav Maga Instructor. His first book The Librarian’s Guide to Employment in the Information Age is now available on Amazon.com