A couple from Haridwar, Uttarakhand, has addressed the court because they wish to have a grandchild.

According to news agency ANI, the couple is suing their son and daughter-in-law, seeking a grandchild within a year or compensation of Rs 50 million.

The parents are furious since the pair married in 2016 but have yet to conceive children six years later.

“They married in 2016 with the intention of having grandchildren.” “We didn’t care about gender; all we wanted was a grandchild,” SR Prasad, the father, told ANI.

Prasad lamented that he no longer has any money after spending it all on his son’s education in the United States.

They were wedded in 2016 in hopes of having grandchildren. We didn’t care about gender, just wanted a grandchild: SR Prasad, Father pic.twitter.com/mVhk024RG3

“I devoted all of my money to my son and had him trained in America. I’m now cash-strapped. We borrowed money from the bank to build a house. We’re having financial and personal difficulties. In our petition, we asked for Rs 25 million each from my son and daughter-in-law, “he stated.

As soon as the story went viral on social media, it drew a lot of attention and responses from individuals.

And the majority of the responses were unfavourable and in opposition to the grandparents’ wishes.

Let’s take a look at some of them that we’ve gathered for our readers: 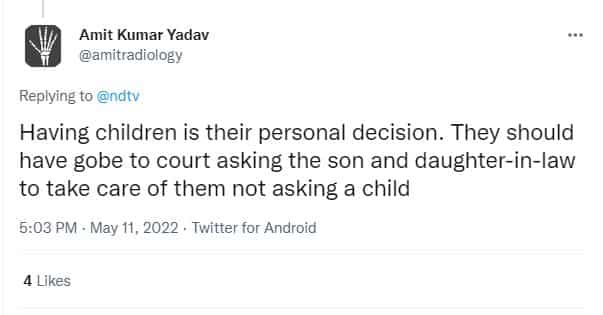