With the long-term slowing of economic growth in developed markets, emerging markets are driving the majority of global economic growth. Much of this growth is attributable to EM’s expanding middle class; a powerful generation of consumers whose new spending habits and internet connectivity are giving rise to quickly growing industries. Nowhere is this more evident than within the internet and e-commerce industry, where EM companies are becoming global innovators in markets ripe for disruption and long term growth.

Despite the fact that EMs are home to the greatest proportion of consumers, with the highest contributions to global consumption, many investors have a myopic focus on US technology stocks when it comes to growth. But with rising purchasing power and internet-connected populations unrivaled by more advanced developed markets, these markets present attractive growth opportunities for investors looking to gain exposure to the booming internet and e-commerce theme.

The Power of EM E-Commerce: Singles Day vs. Prime Day

Amazon (NASDAQ:AMZN) is a global pioneer in e-commerce, often the default shopping choice for US consumers preferring the ease and convenience of home delivery over a trip to the store. Although Amazon’s penetration among US retail spending is astounding as the second largest retailer in the US with 16% market share among the top 10 retailers, it is by no means unique. In China, leading e-commerce platform Alibaba (NYSE:BABA) has established a similar position, but in a market with a population more than 4 times larger than the US. Comparing Alibaba’s Singles Day to Amazon’s Prime Day helps contextualize the success, size, and potential of EM internet and e-commerce companies.

For years, Black Friday was the biggest shopping day in the US. But in 2015, Amazon introduced Prime Day to encourage more purchases online. On Prime Day, Amazon customers are offered discounts across thousands of tech and consumer products that are delivered right to their door. Each year, Amazon has beaten its own Prime Day sales records – this year selling $10.4 billion worth of goods (an increase of 45.2% from 2019).

Prime Day numbers are impressive, but they are just a fraction of Alibaba’s retail sales during China’s Singles Day. Originally known as a holiday for bachelors on Valentine’s Day, Alibaba recreated Singles Day as an online shopping event on November 11, 2009, six years before Prime Day was introduced. Originally, the holiday promoted deals on tech and consumer goods and has grown into the world’s biggest shopping day event, dwarfing the biggest commercial holidays in the US in sales. Last year, Singles Day sales were almost 4x higher than they were for Prime day this year, and over 2.5x higher than they were during Black Friday and Cyber Monday combined in the US last year, at $38.4 billion.1 Despite its enormous growth, Singles Day sales are expected to continue growing this year to $51-60 bn, which is over 5x Prime Day’s sales by Gross Merchandise Volume (GMV), with growth especially driven within China’s largest cities.2

Note: Data for Singles Day 2020 in the above graphic is based a forecast based on consensus Analyst estimates whereas data for Prime Day 2020 refers to reported GVM.

The sheer size of Singles Day in China reflects a key long-term trend around the world: emerging market consumers are an increasingly powerful cohort and a major driver of global economic growth. Many investors are familiar with the EM growth story – that high growth developing countries are facilitating the accumulation of wealth among younger, increasingly educated and connected, and growing populations. But many still underestimate how important EM growth is to the global economy, and the centrality of digitalized consumption to this growth. 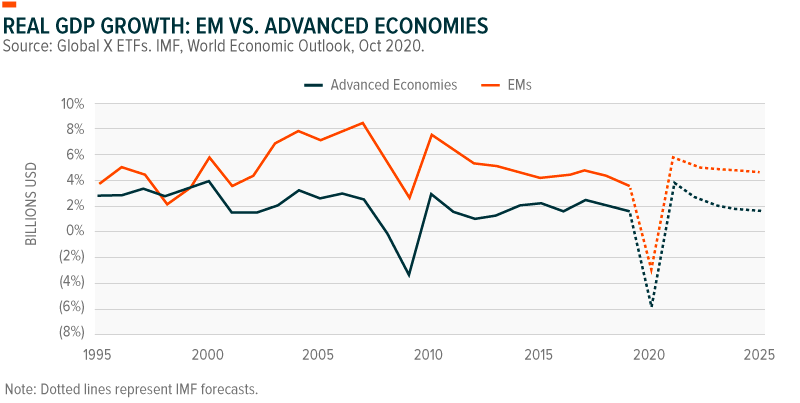 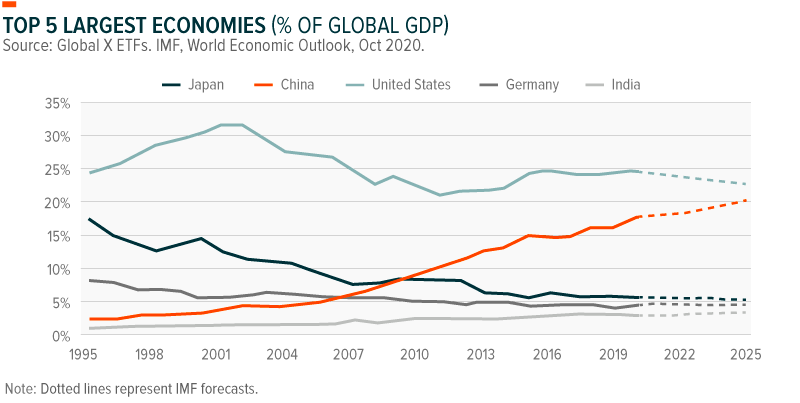 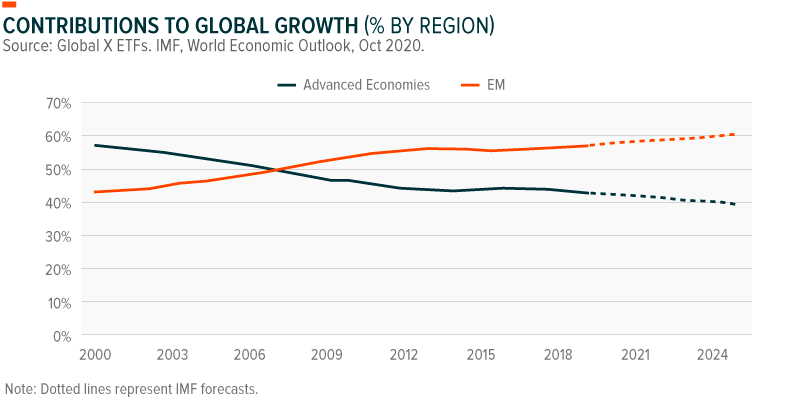 Rapid consumption growth within EMs is inextricably linked to the spread of technological progress and adoption. As consumers become more educated, wages rise, and consumption follows suit. In the United States, such rapid economic growth occurred after WWII, after the labor force ballooned with returned soldiers helping to build out entire industries with the aid of new technologies while they attained college educations on the GI Bill, started families and careers, and bought houses, cars, and goods at a phenomenal pace. At the time, supermarkets and department stores introduced a new shopping experience, becoming engrained in American consumerism defined by a new middle class.

In the emerging markets, the rapid expansion of the middle class is occurring now, in the digital age. Consumers are seeing their discretionary spending increase, just as e-commerce and internet companies are becoming the dominant providers of goods and services. Therefore, as these EM consumers are forming new shopping habits, they are skipping brick-and-mortar experiences and in favor of digital ones. Growing internet penetration and smartphone usage in EMs has increased usage of e-commerce and social media platforms, especially among younger and more educated populations.7

As an early adopter of smartphones, and an aggressive policy to expand internet access, China has become the largest and fastest-growing e-commerce markets globally with a market worth $862.6 billion in 2019 and revenues expected to grow at a 12.5% CAGR over the coming four years.8 This is more than double the size of the US market, which generated roughly $343.1 billion in revenues in 2019 and has an estimated 8.8% CAGR over the coming four years.9

With more people connected on the internet and through their smartphones, the spillover effects of digitalization seem endless. Digitalization will continue to shape how we interact, encouraging communities of shoppers to engage through social commerce platforms or livestreaming networks, while video gamers use such platforms to follow their favorite e-sports teams and connect with gamers.

Greater digitalization has also led to a cross-pollination of several sub-segments of EMs internet and e-commerce, including in the growth of internet software companies and payment platforms, as well as search engines that rival Google (NASDAQ:GOOG) (NASDAQ:GOOGL) in terms of market dominance within local markets.

After years of advancing a structural shift in their economies, EMs on a whole are more diverse than ever considering the shrinking of agriculture and low-cost manufacturing industries relative to the expanding consumer and services-oriented sectors. In 1995, Materials represented over 20% of the MSCI Emerging Markets Index (MXEF), shrinking to represent just 7% of the index today. This is in stark contrast to the Consumer Discretionary sector which more than doubled from 9% of MXEF in 1995 to 20% of the index today, or the Information Technology sector which grew from just 2% of MXEF in 1995, to now 18%.10

EMs have larger and faster-growing populations than developed markets. This trend is reinforced by urbanization, or the migration from rural to urban areas where young people are becoming more educated and increasingly competitive for service sector jobs and higher incomes.

Wage growth is beginning to shift the socioeconomic profiles of many EMs, especially those in Asia. At a high-level, there were 3.2 billion people in the global middle class in 2017 with an estimated 150 million more joining annually. Overwhelmingly, with a projected 88% by 2023, these new entrants will be from Asia. And while the growth of the middle class in the US and Europe remains slow at 0.5% to 1% annual growth, EMs overall are forecasted to grow 6% or more on an annual basis over the coming years.11

Note: In the chart above, “Old” and “New” refer to increases in the global middle-class headcount (i.e. beginning versus end of year).

As consumers earn more, they spend more – and expand their spending beyond just basic necessities to include discretionary items as they achieve greater standards of living. In tandem with the expansion of GDP in EMs has been a simultaneous growth in wages and consumption, the latter a ballast of government policy striving to make consumer spending a greater contributor to GDP.

This is especially evident when looking on a regional level, specifically with an eye towards Asia. Asian EMs account for the greatest growth globally (roughly 60% of global growth) and consequently have consistently stronger real wage growth versus the rest of the world (RoW).

This wage growth translates into greater spending on consumer goods, particularly in the retail and e-commerce space with China alone becoming both the largest and fastest growing e-commerce market globally.12

The increase in consumption is critical to EM growth and is a central tenet of government policies aimed at reducing a reliance on export led-growth to favor a model emphasizing consumer-led growth. China epitomizes this shift away from export-led growth model as household consumption in China continues to grow, accounting for 36% of GDP in 2010 to a forecasted 47% by 2030.

Global internet access has grown tenfold over the last 20 years from 4% to 40%.13 Unsurprisingly, internet use is highest in advanced economies where 9 out of 10 people use the internet.14 Compare this to emerging economies, like Mexico, where usage is quickly expanding. In 2014, only 45% of Mexicans used the internet in 2014 versus today, when nearly 73% do.15

At the same time, smartphone access is increasing rapidly with smartphone penetration anticipated to reach 80% globally.16 Internet penetration is already relatively high in developed markets and in certain EMs like China, but now smartphone ownership is expanding rapidly in some of the world’s largest developing countries, including India, Indonesia, Nigeria, Pakistan, and Mexico. Likewise, although smartphone usage and internet penetration are already high in markets like China, there is still room for growth given the size of China’s population and the lower rates of penetrations in smaller cities and rural areas. With greater coverage area, more sophisticated technologies, and a shift in consumer preferences, China is expected to overtake the US as the world’s largest mobile market by revenue by 2030.17 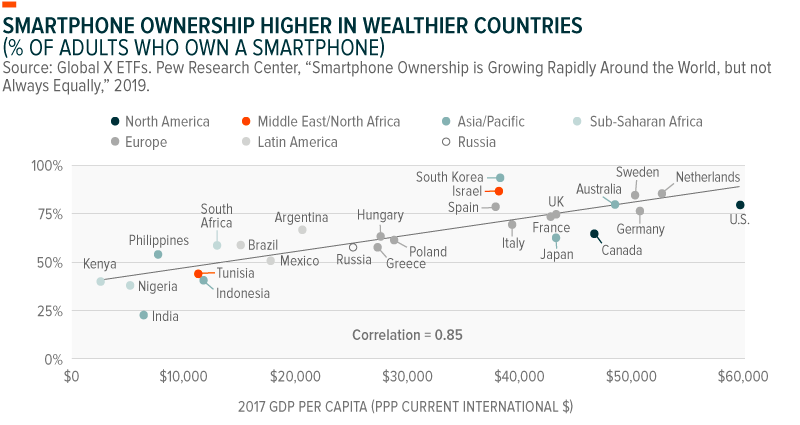 Certain companies like Alibaba and MercadoLibre (NASDAQ:MELI) are fairly well known as China’s and Argentina’s leading e-commerce companies with the prowess in their markets comparable to Amazon in the US. But beyond those two names are dozens of leading technology companies in e-commerce, social media, online entertainment, search engines, and software that are harnessing EM consumption growth. Jumia (NYSE:JMIA), for instance, is the leading e-commerce platform in Africa, while Meituan Dianping (MEIT) is another e-commerce and food delivery giant in China. Companies like these are regional giants, but often overlooked by US-based investors.

The Global X Emerging Markets Internet & E-commerce ETF seeks to offer targeted exposure to some of the most tech savvy companies in the world’s fastest-growing markets. Drafting behind multiple tailwinds, like an expanding middle class, broadening internet penetration, and a shift towards digital consumption EM internet and e-commerce companies are likely to be key drivers of global growth.

7. Pew Research Center, “Smartphone Ownership is Growing Rapidly Around the World, but not Always Equally,” 2019.

11. Brookings, “The Unprecedented Expansion of the Global Middle Class: An Update,” 2017.

14. Pew Research Center, “Smartphone Ownership is Growing Rapidly Around the World, but not Always Equally,” 2019.

Investing involves risk, including the possible loss of principal. International investments may involve risk of capital loss from unfavorable fluctuation in currency values, from differences in generally accepted accounting principles, or from economic or political instability in other nations. Emerging markets involve heightened risks related to the same factors as well as increased volatility and lower trading volume. Investments in securities in the Biotechnology and Health Care sectors can be affected by government regulations, rapid product obsolescence, intense industry competition and loss or impairment of patents or intellectual property rights. Technology companies and companies that rely heavily on technology tend to be more volatile than the overall market, and are also heavily dependent on patent and intellectual property rights. Securities focusing on a single country and narrowly focused investments may be subject to higher volatility. CHB is non-diversified.

Shares of ETFs are bought and sold at market price (not NAV) and are not individually redeemed from the Fund. Brokerage commissions will reduce returns. Indices are unmanaged and do not include the effect of fees, expenses or sales charges. One cannot invest directly in an index.

Editor’s Note: The summary bullets for this article were chosen by Seeking Alpha editors.