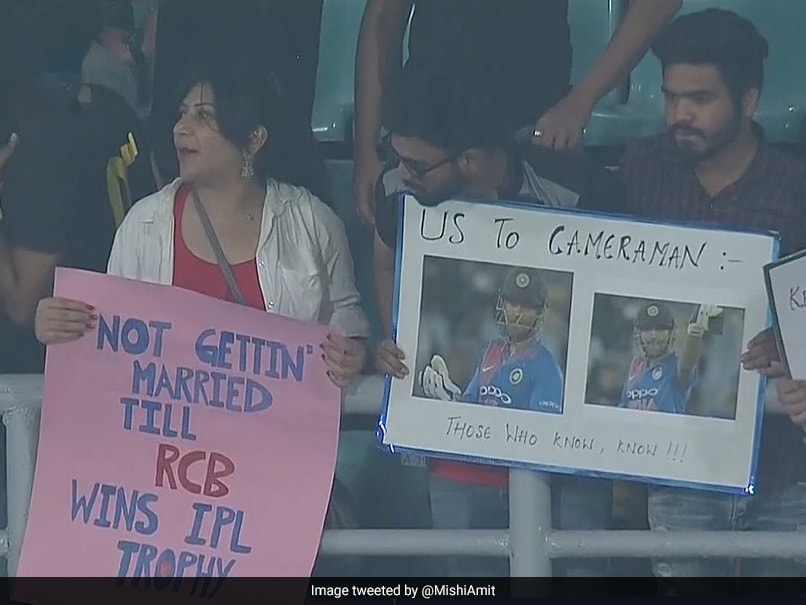 The woman displaying the poster at the IPL match on Tuesday.

On Tuesday in Mumbai, when Chennai Super Kings (CSK) faced Royal Challengers Bangalore at the Indian premier League (IPL), several memorable moments kept fans glued to their televisions. Equally eye-catching were the creative banners flashed by the fans of both the teams.

One such banner has caught the attention of social media and is going viral. It was held by a woman – an RCB fan – which declared that “she would not marry until RCB wins the trophy”. The photo was shared by cricketer Amit Sharma, which showed the woman holding the banner in the stands and flashed many times on the TV screen.

Going by the past record of the RCB, which has never won an IPL tournament, Twitter users were concerned about the woman and responded with amusing memes and jokes. In addition, the squad lost their encounter against CSK on Tuesday evening.

“Really worried about her parents right now,” cricketer Amit Mishra tweeted, as RCB lost by 23 runs for the second time in five matches. Others couldn’t stop themselves from spreading jokes and turning them into memes.

Another tweet of a girl said, ”We finallly know what to say when relatives ask, ‘shadi kab kar rahe ho?’

The RCB is one of the eight founding teams that started the IPL in 2008. Despite having one of the best hitters in the world, Virat Kohli as captain for many years and some fairly incredible line-ups, the team has never won a single edition of the tournament.

Following their loss on Tuesday, they dropped to fifth place in the standings.

Topics mentioned in this article