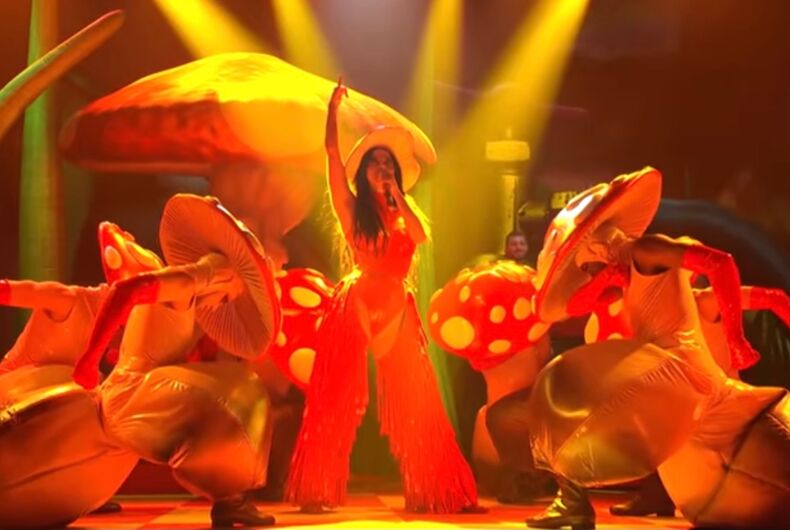 Last night’s Saturday Night Live episode was hosted by Spider-Man actor Willem Dafoe in his hosting debut, alongside singer and LGBTQ community advocate Katy Perry in her fifth appearance on the show.

Perry first performed her most recent single “When I’m Gone” with the song’s featured artist, Alesso, in addition to several background dancers — who were donning mushroom costumes that gave them a rather phallic appearance.

Whether intentional or not, Perry’s first half of her performance on SNL got viewers’ attention — for one reason or another.

Perry eventually sat on (the knee of) one of the performing mushrooms. The dancers also flashed hand fans that read “EAT ME” throughout their performance, which Rolling Stone deemed as “Alice in Wonderland-esque.”

I’m watching Katy Perry sing on SNL among a lineup of dancers dressed like mushrooms that look like penises – is not a sentence I expected to write in 2022.

@katyperry mushroom dancers on SNL have the most unfortunate phallic outfits. I wish I could tell you what the song is about but I can’t stop giggling like a 9 year old. Put some pants on those mushrooms 🙈

For her second performance, Perry sung her 2019 song “Never Really Over” on a mushroom-adorned set, but not with the mushroom dancers aside her.

Regardless, her performances excited fans and created plenty of buzz.

I appreciate that Katy Perry is both sexy and weird. Very hard line to straddle but she did it. I tip my hat to her.

Katy Perry did her thing on SNL tonight

Another portion of the show that made buzz was former NFL quarterback Peyton Manning surprise-appearing on the show’s “Weekend Update” segment alongside Colin Jost.

Jost planned to ask Manning about the NFL playoffs last weekend and the rumored retirement of seven-time Super Bowl champion Tom Brady, but Manning instead was determined to talk about — and break down — the Netflix series Emily In Paris.

They deemed things such as “male cleavage” and “doing the damn dishes” as trends that are “in,” while “movie posters as décor” and “Michael Che” were out.

Watch Perry’s performance of “When I’m Gone” with Alesso below.