In the fifth installment of the 2022 Louisiana Survey, released Tuesday, residents say the most common barrier to having broadband internet is the cost of the service.

The survey, sponsored by the Reilly Center for Media & Public Affairs at LSU’s Manship School of Mass Communication, was conducted in March and based on online and phone responses from roughly 1,000 Louisiana residents/

The survey found that 75% of respondents already had broadband internet service in their homes.

Another 6% said they subscribe to internet service, but it is a slower dial-up service.

About 20% of respondents stated that they do not have broadband or dial-up in their homes.

Providing greater access to high-speed internet services in rural and lower-income urban areas has been a priority of federal and state officials to support education and economic development, and the survey’s findings help delineate the extent of the problem.

Eighty-seven percent of Louisiana residents surveyed said they had a smartphone.

Sixty-four percent of respondents without internet service responded that the monthly cost of a home broadband subscription was the reason they did not have it. The next most common explanation for not having home internet service was that smartphones allowed them access to the internet for all their needs. Read the fifth Louisiana Survey report. 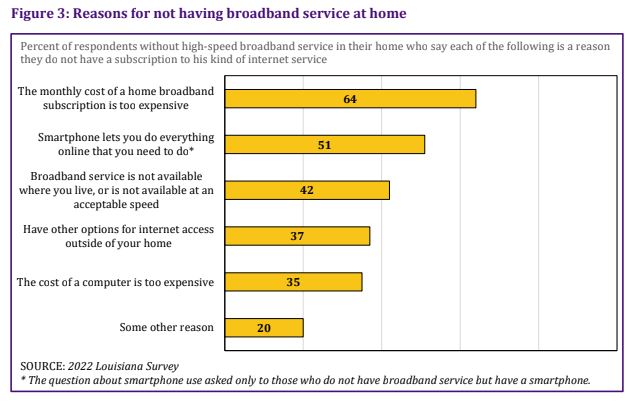