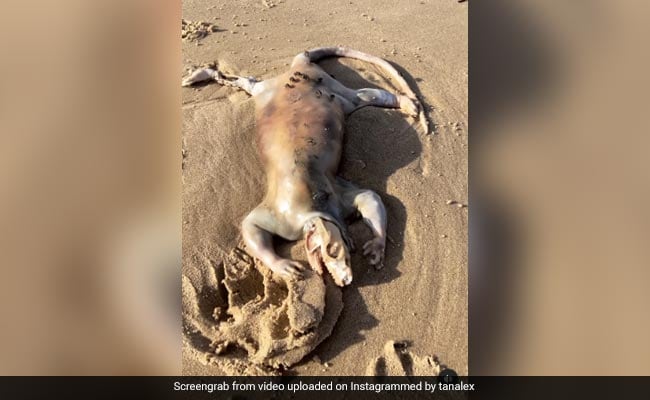 The creature was discovered during the morning walk.

Internet keeps highlighting bizarre things happening around the world. In the latest such video, a mysterious creature washed up on a popular beach in Australia’s Queensland, leaving locals stunned.

The video of the strange creature has been posted by a local Alex Tan on his Instagram handle. The creature appears to have a reptilian-like skull, flabby limbs, a long tail and claws.

Alex said he discovered the creature on the shore of Maroochydore beach during morning walk.

“I’ve stumbled across something weird,” he is heard saying in the video. “This is like one of those things you see when people claim they’ve found aliens,” the man added.

Alex then pans the camera to show the creature. Flies are seen crawling on the creature and buzzing around it.

Alex described the creature as a “de-haired” possum but added that it was “different to anything” he’d seen before.

“Extra-terrestrial,” he added as the video ended.

Some people who commented on the post tagged wildlife experts – including Australian legend Steve Irwin’s daughter Bindi – for their opinion on what the creature is. However, a few commented it looked like a wallaby.

This is not the first time that strange creatures have washed ashore an Australian beach. A bizarre blob-like was discovered last month at Warriewood Beach in Sydney.

The locals were shocked to see the brain-like creature, which was later identified as sea anemone.

In July 2020, environmental conservation organisation SCF Australia posted the photo of a translucent jellyfish lookalike on Facebook, asking users to identify it.

The users later identified it to be a type of nudibranch – or sea slug.