Online regulator Ofcom surveyed more than 13,000 UK people who use the internet about their breadth of internet habits, device use and attitudes to social media.

In all, 30 per cent said that they unsure about or do not even consider the truthfulness of the information they see online.

A further 6 per cent, or about one in every 20 internet users, believe everything they see online.

Ofcom warned that the ‘sheer volume’ of information meant having the critical skills and understanding to decipher fact from fiction had ‘never been more important’. 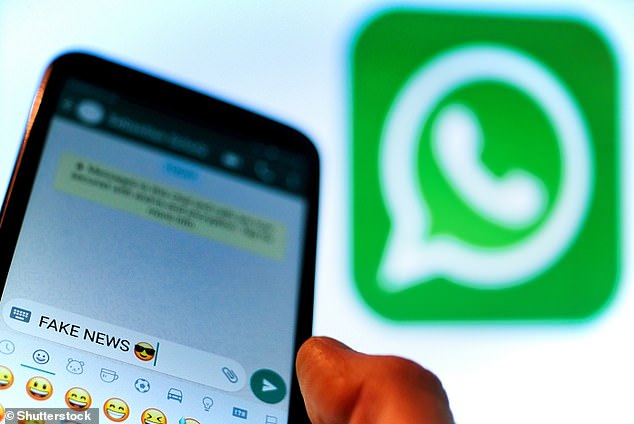 More than a third of internet users are unaware that online content might be false or biased, according to new Ofcom research (file photo)

1. Check the source. This isn’t necessarily who shared the information with you, but where it originated from.

2. Question the source. Are they established and trustworthy, or might they have a reason to mislead?

3. Take a step back. Before you take something at face value, think about your own motives for wanting to believe it.

‘In a volatile and unpredictable world, it’s essential that everyone has the tools and confidence to separate fact and fiction online – whether it’s about money, health, world events or other people,’ said Ofcom chief executive Melanie Dawes.

‘But many adults and children are struggling to spot what might be fake. So we’re calling on tech firms to prioritise rooting out harmful misinformation, before we take on our new role helping to tackle the problem.’

Ofcom has offered tips on what to consider when determining fact from fiction online, including, crucially, checking the source.

For the research, Ofcom conducted three surveys of people aged 16 and over, each focused on different aspects of online use.

For each survey response, percentages were calculated based on one of the three survey totals, rather than the cumulative 13,321 total. 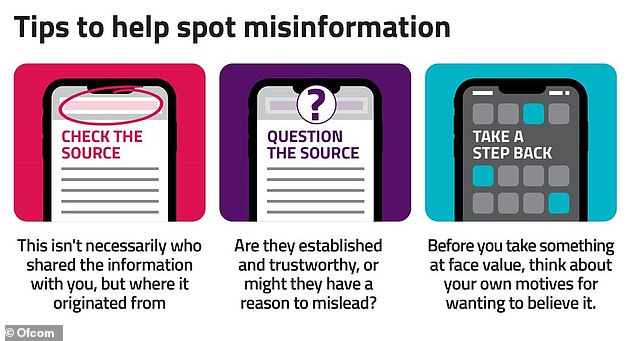 Ofcom has offered tips on what to consider when determining fact from fiction online, including, crucially, checking the source

In one survey, participants were shown social media posts and profiles to determine whether they could verify their authenticity.

Although seven in 10 adults (69 per cent) said they were confident in identifying misinformation, only two in 10 (22 per cent) were able to correctly identify signs of a genuine post, without making mistakes.

The negative impact of social media on young people’s mental health has long been known, but a new study suggests that the age at which they are most susceptible differs between girls and boys.

Researchers asked adolescents about their use social media sites such as Instagram and Twitter and their level of ‘life satisfaction’, and then looked for a link between the two factors.

Sensitivity to social media use might be linked to developmental differences, like changes in the structure of the brain, or puberty, which occurs later in boys than in girls – although the exact mechanisms require further research.

Sadly, the team also found that lower life satisfaction can drive increased social media use, contributing to a viscous circle.

Ofcom saw a similar pattern among older children aged 12-17, with 74 per cent confident but only 11 per cent able to identify genuine content.

Similarly, 24 per cent of adults and 27 per cent of children who claimed to be confident in spotting misinformation were unable to identify a fake social media profile.

TikTok, in particular, is growing in popularity, even among the youngest age groups.

Amazingly, 16 per cent of three to four-year-olds and 29 per cent of five to sevens using the platform, even though the app is supposed to be for people aged 13 and over.

Ofcom warned that many children could be ‘tactically’ using other accounts or ‘finstas’ – fake Instagrams – to conceal aspects of their online lives from parents.

The study found 64 per cent of eight to 11-year-olds had multiple accounts or profiles. Among these, 46 per cent have an account just for their family to see.

More than a third of children (35 per cent) reported engaging in potentially risky behaviours, which could hinder a parent or guardian keeping proper checks on their online use.

A fifth (21 per cent) used the internet in ‘incognito mode’ and 19 per cent deleted their browsing history, while 6 per cent circumvented parental controls put in place to stop them visiting certain apps and sites.

Meanwhile, children are seeing less video content from friends online and more from brands, celebrities and influencers, according to Ofcom.

‘Feeds full of slick professionalised content seem to be encouraging a trend towards scrolling instead of sharing,’ the regulator said. 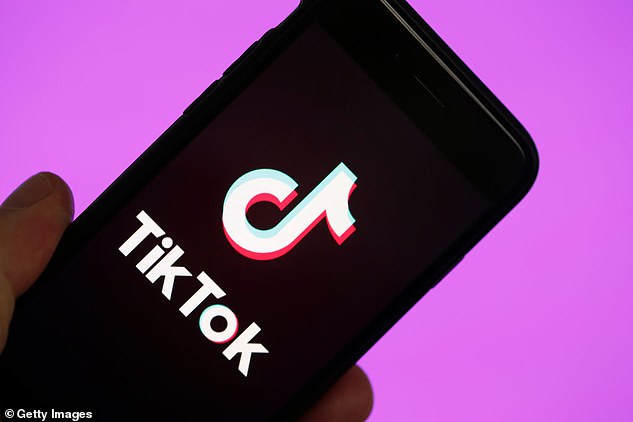 TikTok is a Chinese social media app where users can live stream, create short videos and music videos and Gifs with a host of functions (file photo)

Also, 88 per cent of adults and 91 per cent of children are three times as likely to watch videos online than to post their own videos (30 per cent and 31 per cent respectively).

Meanwhile, 81 per cent of adult internet users want to see tech firms take responsibility for monitoring content on their sites and apps.

Interestingly, children feel positive about the benefits of being online, and many use social media as a force for good.

53 per cent of 13–17-year-olds said they feel that being online is good for their mental health, compared with 17 per cent of the same age range who didn’t.

There are almost 50 harmful effects linked to the use of social media, a 2021 study reveals – and they’re not just mental health-related.

For the study, the team reviewed more than 50 research articles published between 2003 and 2018.

In 2003, social media was still in its infancy and Facebook wouldn’t be established for another year. One of the early social networks, MySpace, was founded in 2003.

Among the 46 harmful effects of social media were found to be privacy violation, deception, panic, conflict with others and an increased appetite for taking financial risk.

Overall, issues of social media range from physical and mental health problems to negative impacts on job and academic performance, as well as security and privacy issues, according to the academics.