You are here: Home / Internet / Panelists call for barriers between broadband and rural communities to be taken down – Wisconsin State Farmer
CLOSE 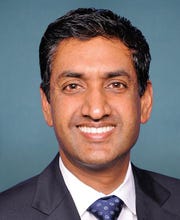 Ro Khanna is the Democratic representative for California’s 17th district. He is cosponsoring a House bill that would invest $80 billion into widespread broadband access. (Photo: Library of Congress)

Many public figures in the Midwest are calling for the federal and state governments to more heavily invest in rural communities by bringing them broadband access.

The ‘Rural America’ panel, hosted by former lieutenant governor of Iowa Patty Judge, discussed rural areas’ lack of internet access beyond dial-up Thursday. Judge said 18 million Americans don’t have stable access to the internet in their homes, hindering school and health services, among other quality of life essentials, especially during a pandemic.

According to a Federal Communications Commission report, 19 million Americans lack fixed broadband access – more than 75% of those people live in rural areas. And even in areas where there is broadband access, nearly one-third of the entire country’s population does not subscribe to internet services.

Rep. Khanna currently cosponsors a House bill, introduced June 24 by Rep. Jim Clyburn, D-SC-6, that would distribute $80 billion in infrastructure funding to guarantee affordable high-speed internet access for every American. Rep. Khanna said the internet affects every part of our lives, especially our ability to participate in society. He said legislation on internet access should not be partisan.

“I hope that this doesn’t get politicized,” Rep. Khanna said. “It’s something that all of us as Americans can come behind and recognize. It’s important for the dignity of community … and participation in modern life.”

Widespread internet access is also an issue of competing with other countries. Rep. Khanna said China is aiming for 99% of its population to have access by 2025. As it stands now, 6% of Americans have no broadband access, and 30% don’t subscribe to internet services because it’s too expensive.

The US Department of Agriculture recently announced it’s also investing $86 million into getting broadband to rural areas. The investment is said to help 17,000 people living in eight states – Alabama, Arkansas, Iowa, Illinois, Indiana, Tennessee, Texas and Wisconsin. Six internet service providers will receive loans so they can expand fiber installation.

One of the loan recipients is Wisconsin’s Mosaic Technologies, formerly known as Chibardun Telephone Cooperative Inc., based in Cameron. The company was given $10 million to install over 325 miles of fiber cable in Prairie Farm and Sand Creek.

Judge said one of the demographics hit hardest during the COVID-19 pandemic is rural children without internet access at home. School and library closures have made it difficult or even impossible for children to be a part of the education system at home.

“We are doing a terrible disservice to rural children who have no way to access the internet, where we are now providing their education,” Judge said.

Bauer said Ellsworth residents have trouble qualifying for grants to expand internet access because 70% of the residents of Pierce County, where over 900,000 people live, commute an hour to nearby Minneapolis-St. Paul for work. Bauer said people living in the county make too much money to qualify, but at home, they’re under-served.

Bauer explained that dark fiber, which is unused optical fiber cable that internet service providers can lease for their own services, is running through Ellsworth, but conditional barriers created when the dark fiber was installed prevent neighborhoods and schools from accessing it.

“We have buildings and infrastructures and silos in Wisconsin that we could use, but we have rules that prohibit redistributing that pipeline because of the original dollars that they got,” Bauer said. “I can think of several schools that have fiber to them, and they go right past the rural communities, and they’re not allowed to tap off of that.”

Schneider, who has been CEO of Marquette-Adams for 10 years and in the industry for 30, said his company’s fiber optic footprint has doubled in the past decade because they received a grant from the 2009 American Recovery and Reinvestment Act. The grant allowed them to expand their services by burying over 500 miles of optical fiber cables. Schneider said the company has been 100% fiber services since 2014.

Smith said internet is now an essential service for farmers and cooperatives because of e-commerce’s positive effects on local economies. He said cooperatives across Wisconsin and Minnesota have had to come up with alternative strategies and plans to continue conducting business during the pandemic, but lack of fixed broadband access prevents many cooperatives from staying connected.

“COVID has intensified the challenges that we’re already facing in rural America,” Smith said. “We can run from these challenges, or we can confront them … develop new solutions and alternatives (and) be better prepared, as a result, to face the next crisis.”

Rep. Khanna added that “the timing is right” for the House bill to be passed in conjunction with other coronavirus relief bills expected in July. The proposed $80 billion would represent just 5% of the $2 trillion coronavirus package passed in April, nearly the same amount as the US yearly defense budget, he said.

“Let’s just get this done,” Rep. Khanna said. “It should be obvious that we need it.”