You are here: Home / Internet / Passenger divides the internet after making a foot hammock during a flight – Daily Mail

By Chloe Morgan For Mailonline

A passenger has caused a stir online after she created a ‘genius’ foot hammock during a flight.

The anonymous woman, believed to be from the US, can be seen fast asleep with her feet hanging comfortably in the self-made device next to the emergency exit of the plane.

But the innovative idea, which was shared to Facebook group Passenger Shaming and created using a blanket, split the internet in two.

While some praised the woman’s creativity, others slammed her for being inconsiderate and ‘rude.’

‘Brilliant! That’s thinking outside of the box,’ enthused one, while a second admitted: ‘That’s pretty ingenious, actually!’ 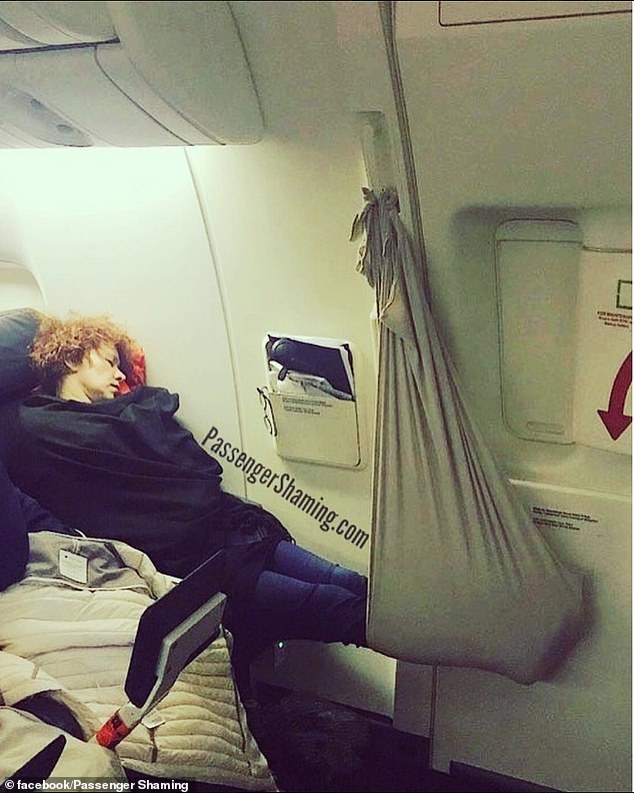 An anonymous woman (pictured), believed to be from the US, has caused a stir online after a photo of her self-made foot hammock went viral

While many took to social media to praise the ingenious device, others slammed the passenger for causing a safety hazard on board the flight

A third commented: ‘I’m not going to lie, I’m impressed,’ while a fourth added: ‘That’s genius, I’m not even mad.’

However, a select few took to the comments section to raise an issue with the safety hazards.

‘I guess the handle next to the door must not be used for this due to safety reasons,’ wrote one, while a second penned: ‘In front of the exit row door. Endangering hundreds of lives. Genius indeed.’

A further added: ‘If it wasn’t so rude, intrusive, and dangerous, it’s actually a smart idea. Too bad.’ 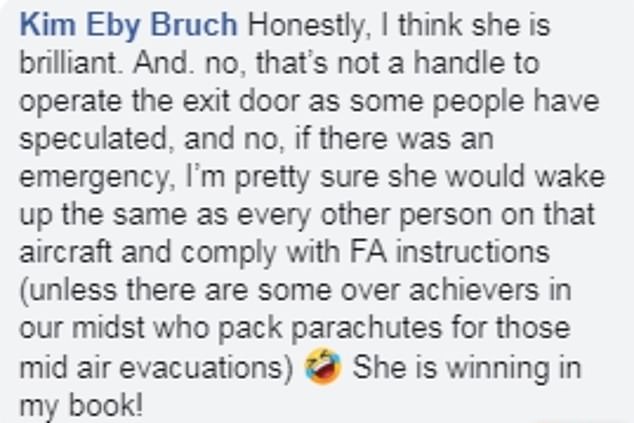 But others quickly jumped to the passenger’s defense and offered nothing but praise for the ingenious device.

‘It’s probably a safety hazard and not allowed but I have to give her props for ingenuity,’ wrote one, while another admitted:

‘Honestly, I think she is brilliant. And. no, that’s not a handle to operate the exit door as some people have speculated.’

‘And no, if there was an emergency, I’m pretty sure she would wake up the same as every other person on that aircraft and comply with FA instructions. She is winning in my book!’

A further added: ‘I can think of lots worse things passengers do.’