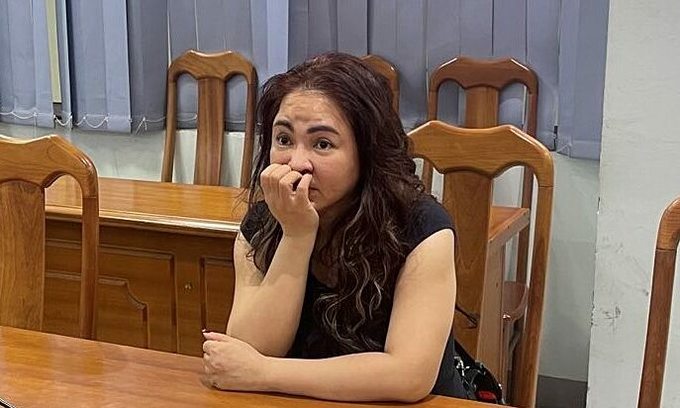 Businesswoman Nguyen Phuong Hang at a police station in HCMC on March 24, 2022. Photo courtesy of the police

The HCMC police are looking into the roles of several people who allegedly helped a businesswoman make accusations against various celebrities on live-streamed Facebook videos.

It is part of their investigation into Nguyen Phuong Hang, general director of Dai Nam Joint Stock Company in southern Binh Duong Province, but it is not clear yet how many are under the scanner or for what.

They arrested Hang, 51, last Thursday on charges of “abusing democratic freedoms to infringe upon the interests of the state, lawful rights and interests of organizations and/or citizens” following numerous accusations of slander against her.

She is also banned from leaving the country until the end of April.

Hang, 51, born Nguyen Thi Thanh Tuyen, and her husband, Huynh Uy Dung, a former general director of her company, are both famous for their lavish lifestyles and philanthropy.

Since the middle of last year she has been taking the Internet by storm with live-streamed videos accusing celebrities of pocketing money they collected for charity.

For months the hours-long videos attracted hundreds of thousands of views each.

On May 25 a video in which she claimed HCMC-based comedian Hoai Linh had raised VND13.4 billion ($581,750) to succor victims of the flood in October 2020 in the central region, but had not distributed the money even after six months attracted around 300,000 viewers.

In other videos, she said actress Hong Van used foul language when referring to her fans, singer Vy Oanh had earned a huge amount of money after having a child with a rich man, singer Dam Vinh Hung had not been transparent in distributing money he collected from benefactors to those financially affected by the pandemic, and apothecary Vo Hoang Yen was a conman who cheated people out of money by promising to cure them.

Since mid-February this year the police met with her on four occasions to warn her against the live-streaming, but she ignored them and ended up in custody.