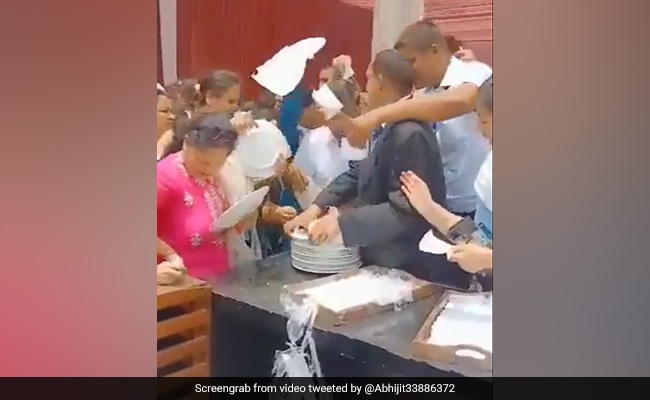 Chaotic scenes were witnessed in a resort in Punjab where school teachers and principals jostled to grab a plate to have free lunch after meeting Chief Minister Bhagwant Mann. The video of the incident, which took place on Tuesday, has gone viral on social media.

The meeting of the government school principals and teachers was called by Mr Mann to seek inputs from them to raise the bar of school education.

But as soon as the meeting got over the teachers moved to dining hall, they huddled around to grab plates and were seen elbowing each other.

Lunch time of Principals and Teachers in Punjab after meeting CM. Time to go to HEYWARD. CM might have gone home with some HEYWARDS. pic.twitter.com/bDwF1HooCm

One of the persons dressed in suit, who appears to be a staff member of the resort, quickly moved the plates to a corner and started distributing it one by one till swarming teachers became overwhelming.

“I am curious to understand what time was the lunch served because they appear to be too hungry,” said another. “They really need to be sent to ‘Hayward’ for some basic ‘civic sense’ training,” a third user commented.

The Punjab government had arranged air conditioned buses for the teachers to reach the venue of the meeting. State Education Minister Gurmeet Singh Meet Hayer said the meeting was called to listen to the suggestions of teachers to improve the education system.

According to news agency PTI, Chief Minister Bhagwant Mann launched an online portal to seek ideas and suggestions from teachers for bringing “out of the box” educational reforms.

He said teachers should send ideas online through this portal to help change the conventional system of education and make it paperless, digitally empowered, the report further said.

Mr Mann also said that the people have lost faith in the present government education system, adding that his government is committed to stop the “brain drain” by bringing back industry in the state to provide jobs to the youths.

The Aam Aadmi party (AAP) leader said that the Delhi model of education would be implemented in Punjab.